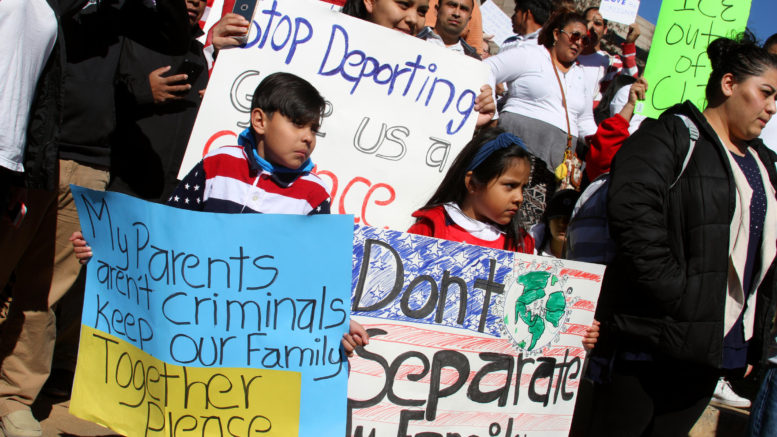 As I prepare for today’s May Day march of immigrants and Tree of Life Synagogue massacre survivors in Squirrel Hill, who were targeted due to their support of immigrants, I can’t, but think of how little has changed in Pittsburgh on the topic of immigration since the massacre.

Since the massacre, the favorite son of the Labor Dem establishment, Congressman Conor Lamb, has continued to vote consistently with Donald Trump and against his own party on every major immigration vote. (Lamb was actually one of 18 Democrats, who voted for a resolution praising ICE.)

In many ways, the pulling of my grant by the Operating Engineers is symbolic of the steps that some in the old guard of labor will go to quash uncomfortable discussion of race and immigration. Immigration is a hot button topic throughout the world, but there are various needs for it that should be looked into further and not just dismissed, for example, some will emigrate to find work or to build a business, people can view an article here about how they can do that, as well as consult with a lawyer so they have everything covered, however, not everyone sees this as a potential avenue and they are quick to dismiss it.

For more than a year, I have been hesitant to speak about this because I feared that it would jeopardize my ability to seek additional grant money from other groups.

However, as a Jew who grew up in the community where the massacre took place, I feel like I must speak up. Eleven Jews gave their lives because they were associated with the cause of immigrant rights. While people like Lamb go around and sing phrases like “Stronger than Hate,” he’s done nothing to stand up for the cause for which they gave their lives.

This isn’t unusual. The labor movement in Western PA has long muted discussion of race as seen on Monday when labor leaders showed up in force to back Joe Biden, despite concerns that his record on mass incarceration would hurt him in communities of color.

In June of 2018, Operating Engineers Local 66 pulled from us a $24,000 grant to subsidize labor reporting in Western Pennsylvania. I believe that they pulled it in large part due to our criticism of Lamb’s views on immigration including covering how the former Marine infamously hide in the back of a barn to avoid taking questions about immigration.

Operating Engineers Local 66 is a powerful union that controls nearly 90% of all major commercial construction work in Western PA and spends over $100,000 a year alone in advertising during Penguins hockey games to recruit workers.

With Western PA lacking a labor reporter and Operating Engineers Local 66 flush with cash, they offered me $24,000 a year to cover labor issues in the region. The agreement was supposed to work like NPR style underwriting.

Under the terms of the contract that was signed, Payday was supposed to have full editorial independence. However, the agreement contained a clause which allowed the Operating Engineers to opt out of the grant contract after three months if they didn’t like what we were doing.

However, the Operators Engineers did not respect my repeated attempts at editorial control over my coverage of labor in Western PA.

The son of the Local 66’s business agent, who worked for his father at the union’s headquarters, would call me two to three times a week and email frequently to comment on articles in Payday that dealt with criticism of Lamb. He would then tell me what he would like the piece to say and suggest ways to highlight positive aspects of labor backing Lamb that didn’t focus on Lamb’s silence on immigration.

I often tried to resist these measures, but ultimately, I found myself spending several hours a week on the phone negotiating; trying to find story ideas that I actually wanted to cover as a journalist instead of writing the puff pieces of construction unions in Western PA that they wanted me to cover.

In no uncertain terms, it was made clear to me that my criticism of Lamb’s stances and his usual refusal to talk on immigration were not topics that their members wanted to be covered.

When the three months period at the beginning of the contract expired, Operating Engineers Local 66 decided to cancel our contract; leaving me in financial straits.

I’ve always believed that they canceled the grant contract because of my criticism of Conor Lamb on immigration. Out of all the matters they expressed concerns about in regards to my reporting, they commented on none more so than my critical writing of Lamb on immigration.

However, the formal reason they gave in writing was that they didn’t feel we focused enough on Western Pennsylvania and West Virginia. Despite the fact that we had written more than a dozen stories on Western PA in three months (or one a week) in addition to writing more than a dozen stories on the historic West Virginia teachers strike, which was part of our coverage, they said we hadn’t done enough (Check out our site and count the articles yourselves.

Since then, I have stopped taking money from unions because nearly every union that I have met with to discuss donating has demanded editorial control of what I write; something which I would never do as a labor reporter.

As a labor reporter, I prefer to rely on the small donations of my readers. By doing so, I am allowed to ask tough questions of the labor movement on issues of race, immigration, and the environment.

As a Jew, I can’t tell you how much it upsets me to see so little change in Pittsburgh following Tree of Life. Too much has gone back to business as usual when it comes to race and immigration and I want to shake things up. I want to force uncomfortable conversations within the labor movement in Western PA on questions of race and immigration.

Fortunately, my readers through their small donations, have given me the editorial independence to ask these tough questions of the labor movement.

Sure, it’s tough at times financially and can be a ton of anxiety. I never know how much money I am going to make each week. I have to hustle freelance pieces when I can pick them up and work on them. I dedicate two to three nights a week to viral fundraising online, but slowly our support is growing online.

Currently, we have 250 yearly and recurring monthly donors who contribute on average about $1,300 a month to Payday, giving us a bottom line. I estimate that it would take another 300 readers to bring us to the point of full sustainability.

There are over 1,200 people on this list, and only 250 of them are recurring donors. So, this May Day, I am hoping to pick up 20 recurring donors as we begin a campaign called “The Summer of Sustainability.”

Somehow, we have managed to keep this publication open for three years producing over 300 stories. Once we achieve full sustainability, we can kick ass as a publication.

So sign up today as a recurring donor for as a little as $3 a month.

Happy May Day folks! Workers of the world unite: we have nothing to lose but a shitty media system that doesn’t cover us anyway.