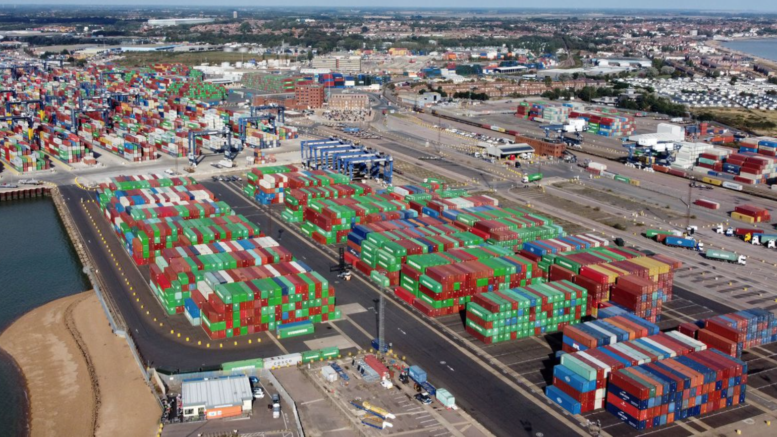 Dock workers at the Port of Felixstowe along Britain’s east coast are set to go on an eight-day strike later this August after negotiations between their union and the port owner fell through.

The Unite union, which represents 1,900 workers, rejected the offer from port owner CK Hutchison Holdings, a Hong Kong-based conglomerate that made a pre-tax profit of almost £61m in 2020 from the port.

CK Hutchison is offering a 7% pay raise and £500 bonus. Unite wants a better offer, given that retail inflation has hit 11.8%, and workers received a below-inflation pay increase of 1.4% last year.

“Both Felixstowe Docks and its parent company CK Hutchison Holding Ltd are both massively profitable and incredibly wealthy. They are fully able to pay the workforce a fair day’s pay,” Unite’s general secretary Sharon Graham said. “The company has prioritized delivering multi-million pound dividends rather than paying its workers a decent wage.”

The upcoming strike will be the port’s first since 1989. Port of Felixstowe, about 90 miles east of London, handles around 40% of containers leaving and arriving in the U.K.

In Australia, workers at U.S.-based Pfizer have walked off their job after the pharmaceutical giant refused to meet the workers’ demand for a higher pay raise as the cost of living has spiraled upwards.

Workers represented by the United Workers Union (UWU) had asked for an 18% pay increase over three years; Pfizer only offered 12%.

The company, which made $22 billion in profit last year and benefited hugely from the pandemic, also plans to shutter a plant in Perth in 2024, which would leave more than 100 manufacturing workers out of work if a new plant buyer does not come in. It refused to guarantee redundancies paid on average hours worked.

“Pfizer’s revenues have doubled in two years, largely on the back of the world’s taxpayers who forked out to have the COVID-19 vaccine distributed in their respective countries,” UWU’s allied coordinator Louise Dillon said. “It really is unbelievable that on one hand Pfizer tell us they couldn’t possibly consider a $1.60 pay rise while shoveling out billions to wealthy shareholders across the planet.”

Pharma workers in the U.K. and South Korea also went on strike earlier this year over pay disputes with GSK and Novo Nordisk respectively.

One worker said they are earning less than half of what they did previously. On some days, they don’t even make more than RM40 ($9). Navigation systems the workers are forced to use are inaccurate and end up cutting their pay, since fares are calculated based on distance, he added.

“The situation now is like masters and servants. We are chained to these corporations by the fact that we have to purchase their carrier bags and earn according to their systems … Why do we have to follow their rules when our fares keep getting lower and lower?” the worker, who was only identified as Boo, said at a press conference.

Workers – and not the companies nor the customers – are also faulted when orders go wrong. “When it rains, when traffic is congested, when customers complain about late deliveries, everything is the rider’s fault,” said a rider from Foodpanda, one of German food delivery corporation Delivery Hero’s many subsidiaries across the world. Though not profitable, Delivery Hero made €6.4 billion ($6.5 billion) in revenue last year.

“[Grab] likes to call us ‘Partners’, but what does this Partnership get us? Nothing,” another driver who goes by Sobinder said. Grab is one of Southeast Asia’s largest delivery and ride-hailing companies.

(We recently wrote a piece about how gig workers across the world are suffering amid the global economic crisis for The American Prospect. Read it here.)

Honeys Holding, a Japanese clothing company, said it will spend $11 million to build a third factory in Myanmar, a country that has been under military rule since a February 2021 coup.

Honeys’ plan seems unusual, given the exodus of foreign businesses from the Southeast Asian country. But that’s because of its reliance on cheap labor and giving workers few rights.

In 2017, the company fired labor leaders during a dispute over workers’ demands for more time off during the Thingyan holidays, Myanmar Now reported.

The manufacturer didn’t just ignore worker demands to reinstate those who were unfairly dismissed; it forced higher production quotas on them – from 500 to 750 pieces a day. Those who couldn’t meet the target were fired, and around 400 lost their jobs in a month.

Donate to help us continue to cover labor around the world.