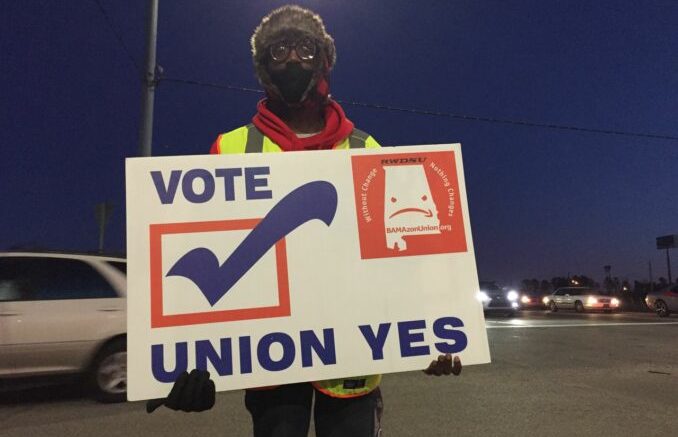 I direct messaged my friends a tweet of a screenshot showing a link to an American Prospect story by retired New York Times labor reporter Steven Greenhouse that described psychological warfare being performed by Amazon on its workers.

Now, multiple reporters from various left outlets including Payday Report, franknews, The American Prospect, and More Perfect Union, have reported that they have all had their content blocked and pegged as “suspicious.”

“We never got any explanation for why they removed it,” said RWDSU organizer Josh Brewer, who has been helping lead the battle against the e-commerce giant.

In response to the negative publicity, Amazon has hired teams of rapid response PR agents who are scurrying the web searching for viral tweets that make Amazon look bad. Thus, many on the left believe that Amazon is working closely with Twitter to prevent negative Amazon content from going viral.

Amazon may have wanted to block Greenhouse’s reporting on their anti-union intimidation, fearing that public sympathy for workers could help the union cause. Here is the full transcript of the post clipped from the American Prospect that Twitter deemed “suspicious content”:

“They send every worker a few text messages a day. They have inundated their phones. They also do a walk-around [in which supervisors walk around and talk to individual workers]. The supervisors have a ‘give us another chance’ spiel, and they take the workers water and candy. There are also captive-audience meetings. They’re more classroom-style. They’re basically a regular meeting, and they talk about total union spending on automobiles, how much they spent on travel and cars last year. Things like that.

What’s been most appalling is when a union activist who can’t take it anymore gets up and says, ‘The union doesn’t encourage that type of stuff. Enough is enough. Bring in the union. Give us back our essential pay.’ And you’re called to the front of the room. They take a picture of your badge like you’re an infidel. They cast you out of the room and send you back to work. Once you’re identified, you’ve been marked.”

Last night, Greenhouse retweeted my tweet of his interview with RWDSU organizer Josh Brewer to his 52,000 Twitter followers, including many of his former co-workers at the New York Times who began to follow it.

However, that viral momentum was stopped when Amazon temporarily blocked readers from viewing my screenshot of Greenhouse’s depiction of captive audience meetings by labeling it as “suspicious content”.

Not only did Twitter block it from being posted, but multiple friends, who I sent the story to in private direct messages to friends of mine, including The Nation’s Tim Shorrock, a veteran labor reporter who was outraged that he was unable to see my tweet of Greenhouse’s labor reporting on Amazon given Twitter’s block.

“WTF @Twitter? What is so ‘suspicious’ about an American Prospect article on Amazon union-busting? Too close to home?” tweeted Shorrock.

Fortunately, several reporters spoke up about the censorship.

Never before in a union election has a corporation possessed the ability to block labor reporters from sharing links to news stories with other labor reporters.

This is an attack on freedom of the press and Payday Report plans to fight back by continuing to cover the manipulative physiological warfare that Amazon is employing on its workforce in Bessemer, Alabama in their attempt to cajole their workers into voting against their interest in the upcoming union election.

Help us continue to fight back against two corporate media giants and get out the story of workers organizing in Birmingham.