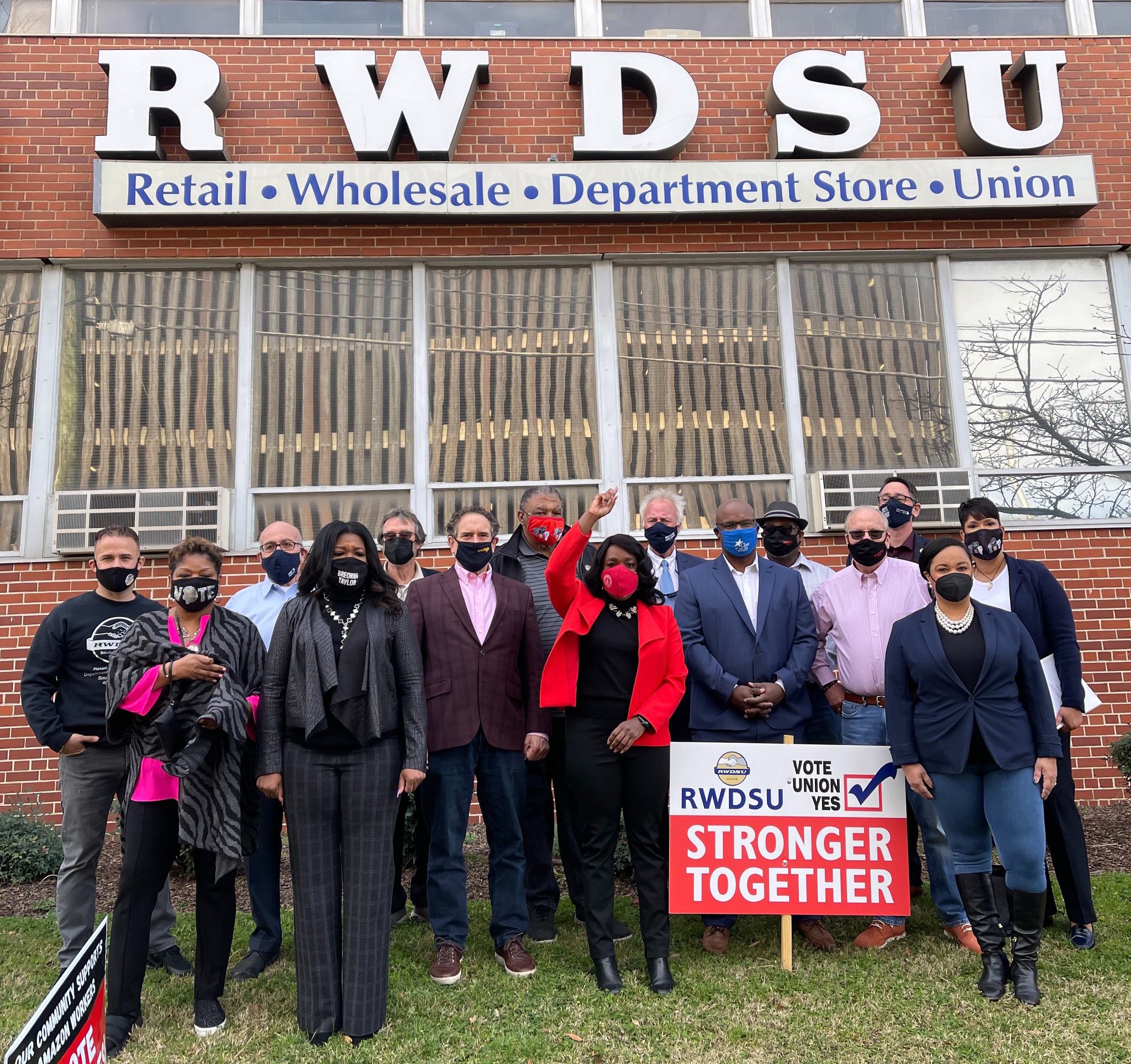 Greetings from the Burgh, where we’re struggling to stay awake after working late nights over the  weekend to report on the Amazon union vote in Alabama.

Payday reporter Alexander Richley, a local reporter based in Birmingham, is helping us out and provided excellent interviews. Donate to help pay him a $1,500-a-month salary.

Today, after I inadvertently talked about how the ‘tide’ was turning in the union’s favor during the union drive at Amazon in Birmingham, hundreds of Alabama football fans began tweeting ‘Roll Tide’ to show their support for the union.

Then, when Payday started tweeting the hashtag #RollTide, we raised just over $1,400 in only four hours, largely from Alabama addresses.

Crowdfunding momentum like this is important to maintain. So help us to keep the momentum going and donate today so we can continue covering the union election at Amazon in Alabama.

Remember, the best way to support us is becoming a recurring donor today.

Yesterday marked the 66th anniversary of Bloody Sunday when civil rights marchers were beaten by police for trying to cross the Edmund Pettus Bridge in Selma, Alabama

“All of these Amazon workers stand in the same tradition as John Lewis, as Amelia Boynton Robinson, as those foot soldiers who dared to change the world by having the audacity to stand up for their rights.” Black Birmingham Congresswoman Terri Sewell, told a press conference this weekend.

Now, signifying a growing national momentum for the Alabama unionization effort, leaders of the Black Lives Matter movement (along with some of their key organizers) are becoming increasingly invested with staff and organizers being sent to Alabama from several top racial justice groups.

With support weakest among young Black men in the plant many are hoping that the Black Lives Matter movement can get younger Black activists more engaged on their behalf. Activists are seeking to link union busting to racial oppression & are pushing back in unprecedented ways.

(See Payday’s longform from this summer, How Black & Brown Workers Are Redefining Strikes in the Digital COVID Age, on how the Black Lives Matter movement is changing the labor movement)

Similar to how vaccines inoculate patients against COVID-19, union organizers call it ‘inoculation’ when workers are trained on how to respond to the toxicity of anti-union messages.

Instead of getting into arguments with anti-union supervisors, many Amazon union activists are using Joe Biden’s statement to push back, citing “There should be no intimidation, no coercion, no threats, no anti-union propaganda” during the election and “No supervisor should confront employees about their union preferences.”

Instead of falling victim to demoralization, such as when union busters use divide and conquer techniques, Biden’s support has made pro-union workers feel ‘cool’ and acted as a shot in the arm for union activists.

“Your support really gives people the power to persevere through this time as we get through this vote,” said one young Black Amazon worker in a viral video distributed by the group More Perfect Union.

White House Chief of Staff Ron Klain took to twitter to thank the workers; “Thank you to workers in Alabama for this thank you to @POTUS”

“We at UCOMM are Amazon consumers too, and we know what a challenge this may be. Coming to America 2 is being released that week and our daily routines depend on us asking Alexa questions all damn day. For one week, unplug your echo dots, stay off Amazon Shopping and watch Netflix instead of Prime,” wrote UCOMM.

The call went viral with even top labor leaders like the American Federation of Teachers Preisdent Randi Weingarten endorsing the boycott saying, “A great way to stand in #solidarity with the #BAmazonUnion movement this week.”

However, RWDSU leadership has not formally endorsed the boycott as some within the union worry that the image of a boycott could make people more hesitant to get directly involved.

Much like during the West Virginia Teachers’ Strike, people are organizing spontaneously online. With many people eager to help workers at Amazon, they are simply organizing their own boycotts not waiting for formal organizations to do it for them. Boycotts were a crucial part of textile workers’ drives in the 1970s and could play a key role in making workers feel validated during the Amazon boycott strike.

Biden Support for Amazon Union Revs Up Momentum for PRO-Act

Win or lose, Biden’s unprecedented support for the workers has galvanized labor to push on Congress harder for the PRO Act, which would

Earlier today, Biden issued a press release announcing his support for the PRO Act in a move that was welcomed by many in the labor movement.

“The policy of the United States Government, stated clearly in the National Labor Relations Act is to encourage union organizing and collective bargaining,” said Biden in a statement today.

Alright folks, that’s all for today. We have hours and hours of Amazon worker interviews to transcribe from Birmingham so we have to go. Stay tuned for ongoing coverage of this historic union election.

Keep all the donations coming so we can hire more folks, eat good food, and focus on reporting, not fundraising.

Remember the best way to support us is to sign up as a recurring donor today. Thank you to our donors who make our work possible.