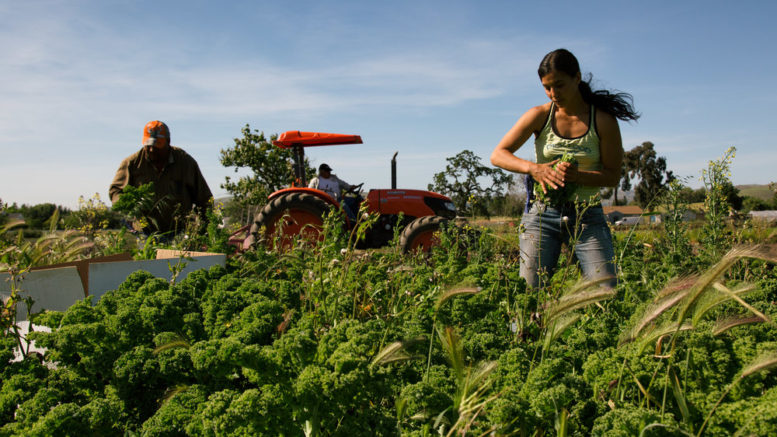 Kale is all the kraze these days.

Tasty, versatile and packed with nutrients, the superfood is the go-to dish for soccer moms, hipsters, and poor folks alike.

However, if health food junkies knew what was happening on the farm of Teachey Produce, in Rose Hill, N.C., they may not be so ecstatic.

Workers in the kale fields routinely are forced to work in unsafe conditions without water. Worse, they face wage theft. However, in North Carolina, workers organized by the Farm Labor Organizing Committee are fighting back and winning victories.

Victoria Hernandez is one of those workers.

For a year and half, Hernandez and her husband, Florencio Jose-Ambrosio, worked on Teachey Produce, a farm owned by the couple Debbie and Marshall “Mark” Teachey along with their brother Michael Teachey.

At first, she said conditions seemed fine, but over time the workers say the owners became more and more hostile to the workers.

The Teacheys had often provided the workers with ice to put in their water. Then, in the summer of 2016, they stopped providing the ice. The workers, though, kept working and tried to make the best of it.

Then, a worker who wishes to remain anonymous out of fear of retaliation from ICE, went to work in the fields and quickly realized that no water was placed out in the fields for the workers to consume.

Out of fear of losing his job, he went about working anyhow.

Within a few hours, he collapsed. He was hospitalized after suffering from a heat stroke.

Since the worker lacked health insurance, he was stuck with an $8,000 medical bill, the equivalent of one season’s worth of picking.

The owners refused to file the worker’s compensation claim or help pay the bill.

To make matters worse, in the summer of 2016, the pickers started noticing that $25 was being deducted from their paychecks every week.

The farmworkers were routinely paid by the bucket. When the workers asked why the money was being deducted, farm management said that it was because the workers weren’t picking the kale properly.

Outraged, along with her fellow workers, Hernandez decided to talk to an organizer for the Farm Labor Organizing Committee (FLOC).

FLOC is one the most dynamic farmworker organizing groups in the South. Through decades of long, militant struggle, they have won a union contract with the North Carolina Growers Association and now represent more than 10,000 H-2A guest workers throughout the state.

Over the years, FLOC has earned a reputation for winning results for workers. As a result, many immigrant workers feel like they can come forward to the organization.

Hernandez and her fellow workers decided to get in touch with one of the organizers that they had met at the community meetings.

The workers from Teachey Produce began to meet with FLOC and develop a strategy. Over time, a majority of workers employed at Teachey began meeting. They decided then to approach the boss informally and see if they could work the matter out. However, the owners refused to meet with FLOC to resolve the issues.

The workers decided to get a lawyer involved.

“When we got a lawyer in the case, [the owner] brought me out and told me that if you don’t drop this case, I am gonna call immigration, and immigration is gonna take you and kick you back to Mexico,” says Hernandez.

Payday was unable to reach Teachey Produce for comment.

However, the workers didn’t back down. Instead, they filed a class-action lawsuit alleging violations of wage and hour protections, safety laws, and retaliation for speaking out.

Hernandez and her husband both received $13,500. Another worker received $6,500. Finally, the worker who was hospitalized received a $7,500 settlement to cover his medical bill. In addition, legal fees were deducted for the lawyer and a pool of $5,000 was created for any other workers who may feel their wages were stolen.

“Abuses of farmworkers like these are very common,” says FLOC’s Crowe. “But the fact that they spoke out and came to an organization like ours is very unusual.”

Despite the intimidation felt by many immigrants, FLOC activists say that community labor organizations like FLOC are going to become even more vital in the Trump era.

“There are a lot of abuses against Latinos and farmworkers,” says Floricel Morales-Cruz, one of the kale workers. “I want people to know that they shouldn’t let growers take advantage of them and that we need to be organized.”

Be the first to comment on "Kale Workers in N.C. Show How Immigrants Can Win in the Trump Era"