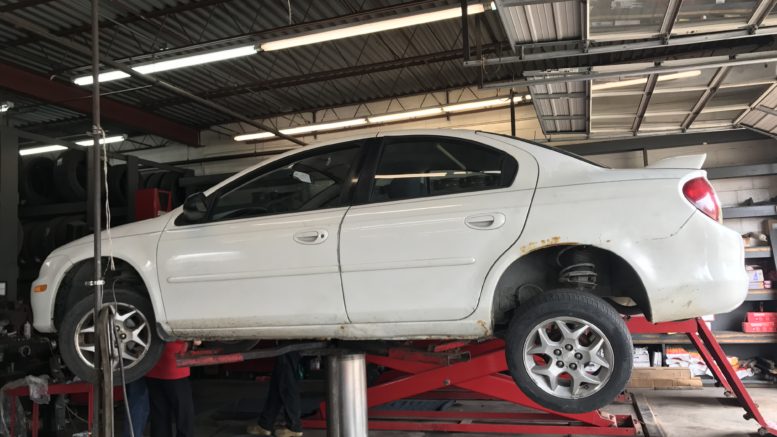 Last winter, Payday raised $6,000 from over 100 readers. With a portion of this money, we bought the Payday labor reporting mobile a 2003 Dodge Neon SXT named “The Judge Hanson.”

The car is named after its former owner, Pennsylvania Judge Wayne Hanson, a Bernie delegate to the DNC, a yinzer’s yinzer, and a diehard Payday reader.

Much like its namesake, “The Judge Hanson” is a goofy, funny looking car, but also very capable of kicking ass on behalf of the working class.

Since buying the car in March, we have traveled over 7,000 miles covering the movement to #OrganizeTheSouth.

Now, Payday Senior Labor Reporter Mike Elk, who much like many Americans lives paycheck to paycheck, is struggling to figure out how to come up with $300 so we can get back on the road.

That’s why we need your help as readers to get “The Judge Hanson” back on the road.

Let’s just talk about a few places the Judge Hanson has been over the past three months that the mainstream media has ignored:

–  Payday Report covered the historic “March for Mississippi” against Nissan.

– In “The Judge Hanson”, we traveled to Huntsville Alabama, where we covered the effect that Indivisible activists in the Deep South were having on the fight to save Obamacare.

– We went to North Carolina to cover the growing Fight for $15 and the fight against pre-emption laws blocking local municipal wage ordinances.

– Next, “The Judge Hanson” traveled to Charleston, South Carolina to write about a minority union struggle of black nurses at the Medical University of South Carolina. (Look for this story next week).

– Then, we drove “The Judge Hanson” 9 hours overnight through the Smokie Mountains to Kentucky. In Louisville, Payday scored exclusive interviews with Senator Bernie Sanders and DNC Chair Tom Perez on the need for Southern Democrats to embrace unions in the South.

–  A week later, we were back on the road to Atlanta, where we covered the Southern Worker Assembly and the growing minority union movement in the South.

– Then, we high tailed it back to Louisville. There, we captured the story of how Trump’s crackdown on undocumented workers has hurt the Kentucky Derby.

– Finally, two weeks ago, we were down in Chattanooga, Tennessee. There, we covered how the UAW is starting to get more aggressive in their 7-year fight to organize Volkswagen.

If just 30 of our readers gave ten bucks, we could get “the Judge Hanson” back on the road.  And excessive funds, we plan to spend on gas, beer, and organizing in the South.

So, if you can, give today and share our fundraiser on social media. And donate here on GoFundMe