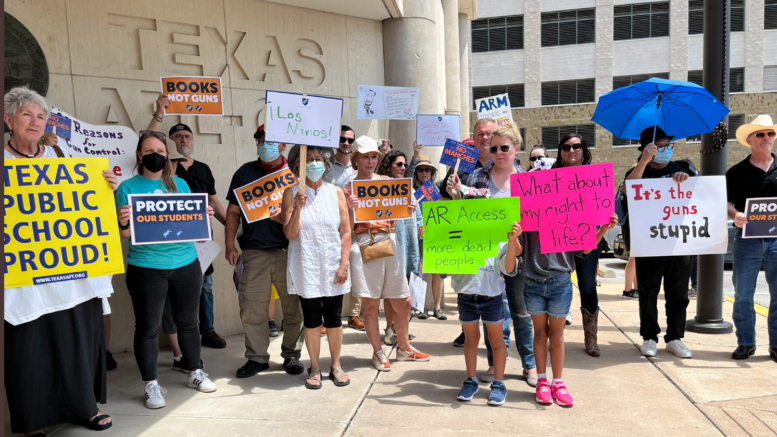 Greetings from the Burgh, where we are making a big push to hit our payroll goal. Donate now.

“Two of our fallen colleagues will never go home. Nineteen children will never graduate and see their parents again,” AFT Texas President Zeph Capo said during the Texas march. “When is it going to be enough? When we say, ‘Our children are more important than someone’s right to own a weapon that should only be used for one reason, and that is to take human life.’ It’s unnecessary.’”

For more, check out the Austin-American Statesman

With a little over 54 hours to go, we are $547 short of meeting our payroll goal.

Please donate to meet this payroll goal and if you can, please sign up as one of our 691 recurring donors today.

Donate to help us cover topics like the unions fighting back against guns.

There has been an uptick in the organizing of resident physicians across the US, with actions this year at Stanford, the University of Vermont, and the University of Washington. Now, 1,300 resident physicians employed at LAC+USC Medical Center, Harbor-UCLA Medical Center, and Martin Luther King, Jr. Outpatient Center have voted to strike. A full 98% of the votes cast were in favor of the strike authorization.

The workers are calling for a pay raise and overtime limits.

“We’re doctors, and people see us with white coats, so they think we make what you would think a doctor makes,” Camila Alvarado, a second-year family resident at Harbor UCLA, said during a news conference earlier this month. “But in residency, if you divide by the number of hours we work, which is about 80 hours a week, we actually make about minimum wage, if not less than minimum wage.”

For more, check out KABC

Yesterday, workers at Amazon in Bellmawr, New Jersey walked off the job to protest the closing of the warehouse and being transferred to other facilities. In addition, many tenured workers are being denied their long-promised raises as a result of the transfers.

“All of the managers were here at 1 or 2 in the morning today, and they usually don’t come in until 7 or 8 in the morning,” Amazon worker Paul Bundell told WHYY. “We got them trying to figure out what to do to try to blunt the impact of us stopping these packages, because they know we’re the ones who move them.”

For more, check out WHYY

Workers at the Amazon warehouse in Garner, North Carolina are launching their own independent union effort under the banner of the group Carolina Amazonians United for Solidarity and Empowerment (CAUSE). They say they were inspired to organize after seeing workers on Staten Island win an independent union with the Amazon Labor Union (ALU) under the leadership of Chris Smalls.

The workers don’t yet have enough signatures to file for a federal labor relations board election but expect to in the coming months.

Donate to help us cover how unions are fighting for gun control. Please, if you can, sign up as one of our 691 recurring donors today.

Thanks again for all of your support.