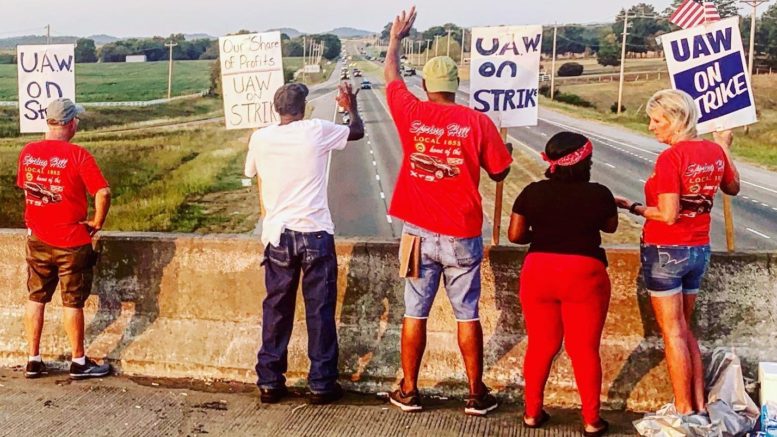 SPRING HILL, TENNESSEE – “You wanna go ahead and get a burst of adrenaline – step out on the side of the road,” says UAW Local 1853 Chair Mike Herron a tractor-trailer passes blaring on the horn on the picket lines outside of General Motors plant in Spring Hill, Tennessee. “You can see all these cars are honking going by, thumbs up – the people know this about the American dream.”

As we speak, a middle-aged African American worker pulls a Chevy SUV over to the side of the road as he gives a thumbs up to workers.

Throughout the day, families and individuals have been stopping to drop off food and water. On the side of the highway by the plant gates, nearly ten coolers full of water sit while another 20 cases are piled nearby. The UAW has collected so much water that they are organizing shipments of excess water to Flint, where workers are also on strike.

“It really gives you goosebumps when you think about what’s going on here,” says Mike Herron.

All of a sudden, a car pulls over on the side of the road Adrian Ruiz, the owner of nearby Cali Mexico Burrito, pops out and walks over with a box of nearly three dozen burritos.

“Honestly, 25%-30% of my business comes from the union, and that’s really helped me,” says Ruiz. “I wanna give back. They helped me out; they helped my business.”

In Spring Hill, Tennessee, more than 3,500 hourly and temporary workers are employed at the UAW-represented GM facility and living in a town of only 40,000. However, long-time labor activists say that they have never seen union support like this in Spring Hill.

“It’s really unprecedented. I have never seen anything like this,” says local Sheetmetal Local 177 union activist Adrian Mizell. “This level of support may be unprecedented for the South.”

The community has been galvanized by two issues primarily: stopping continued outsourcing from General Motors plants and the need to stop the usage of permatemps, who are never made full employees.

“There are a lot of workers in Middle Tennessee that are temporaries, and they know that we are fighting for them,” says Mike Herron.

The usage of temporary employees in Southern auto factories is widespread, with nearly half the workforce of Nissan’s nearby non-union Smyrna plant being temporary workers. At General Motors’ Spring Hill facility, some workers are kept in temporary status at a wage of only $16.66 for a period of 3-7 years.

As we speak, 40-year-old Jeremy Hager, a temporary worker, who has been employed for nearly four years in Spring Hill, walks over holding a picket sign.

“I am going put this in perspective: he’s a temporary worker, and I’m a full-time worker,” says Herron as he points to Hager. “Last week in February, I am overjoyed, I’m having one of the best weeks of my life because I am getting a check of $10,000 – $12,000 based on profit sharing, he is getting nothing.”

Not only do temporary workers at GM’s Spring Hill not get profit-sharing checks, but they only get three paid days off all year; forcing them to take unpaid time off for vacations and being sick.

“It’s rough,” says Hager, “but I’m sticking in there. I’m sticking with an American company, and hopefully, we can keep these jobs in America.”

“Maybe if we get the right to hire our temporaries, maybe some of these other businesses will follow suit because that’s typically what will happen. They will go ahead and try to prevent unionization by doing something like that,” says Herron. “If our workers here are made permanent, I think there will be a ripple effect at Nissan, which is 60% temporary and just 45 minutes up the road.”

With so many workers in the South negatively affected by permatemp employment, the outpouring of support has been a surprise to many.

With GM and UAW still very far apart in negotiations, many are predicting that the union may stay on strike for weeks. The massive community support that workers on the picket line is encouraging them to push on for as long as it takes.

“I understand that there are some people out there that don’t want this to continue any longer than it has to, but there are some of us that are prepared and willing to go for months to drive home a message,” says Hager as cars blow by honking their horns on old Highway 31.

Donate to Help Us Stay on the Road Covering This Story