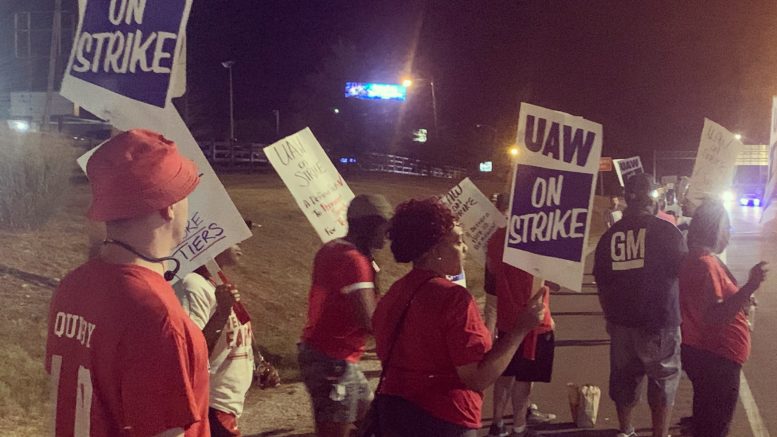 BOWLING GREEN, KENTUCKY – “Eww that keeping you going tonite,” says GM striker Nancy Childress as her elementary-school-age son grabs a double-chocolate donut and runs back out to the picket line to blast the siren of a broken megaphone.

Not only did Childress’ son show up, but so did her husband, her two daughters as well as their friends, who work at the local unionized Meijer grocery store.

“We came out last night, and they wanted to come out again tonight,” says Nancy, a fourth-generation UAW-GM worker. “I had been working at the union hall today when [my daughters] had been at work and when my daughters got off work, they were like ‘we wanna go back out to picket line.’ That’s family fun – you can’t turn that down”.

“As soon as my daughter gets off work tonight, she comes too,” laughs 35 year GM veteran Charlie McMallian.

“We have had lots of families here,” says Nancy Childress.

“You gotta think that our kids are just as involved with this as we were since they did away with our healthcare,” says McMallian, citing the decision of GM to cut workers’ healthcare in retaliation for striking.

On Saturday night, the main gate outside of GM’s Corvette factory here is lit. Over 50 strikers and their family members hold signs as cars drive by revving their engines and honking their horns to show solidarity with the strikers.

“It’s awesome to look at all the people out here,” says UAW Local 2164 President Jack Bowers. “Everybody is having fun, and I think there are driven because we have been short-changed; not necessarily my generation because I got 34 years in, but some of these temporary people out here, they got two jobs.”

Bowers says that for the last 4-5 years, the General Motors Corvette plant has hired almost exclusively temporary workers, who can only be promoted to permanent status at the discretion of management.

“Being an old-timer, I don’t see a lot of this strike having to do with the older generation,” says Charlie McMillian, “but we got a lot of young people who need this. If a temp gets made permanent out of this deal, it will all be worth it.”

Throughout the course of the strike, a new sense of solidarity has been formed between older and younger workers.

“It really made me feel like I am more a part of my union seeing so many in the union stand up for me,” says temporary worker Joshua Blanton. “The people I am standing with here, this is family.”

“I have met more people this week [on strike] and made so many new friends that I am just gonna have to find them in there when we go back to work,” says Charlie McMallian.

“This is the beauty of it man,” says Joshua Blanton. “Even when life throws you lemons, we just put a little sugar in it and make lemonade out of it.”

Be the first to comment on "In Kentucky, Families Pack the Picket Line on Saturday Night"