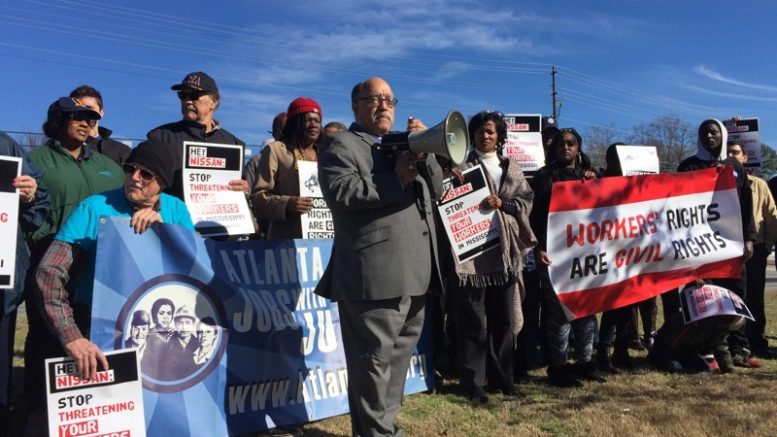 While those states in the South made gains, others lost union members for reasons that are unclear:

Despite Maryland’s gains in union membership — and Democrats’ need of labor’s support to regain the Governor’s House in 2018 — it appears that Democrats in the state are intent on fighting against the labor movement.

Leggett wrote in a letter to City Council President Roger Berliner that he vetoed the bill because he remains concerned “about the competitive disadvantage [the bill] would put the County in compared to our neighboring [counties].”

“Working families who fear life under the Trump presidency need not wait for the White House to make their lives harder — their own local leaders have already started,” the MD/DC Fight for $15 Coalition said in a statement about the move.

Meanwhile, Derek David, the Democratic chairman of the Maryland House Economic Matters Committee, has introduced legislation that would ban local governments, like Montgomery County, from passing initiatives to raise their minimum wage.

“We’re not a collection of 24 individual fiefdoms,” Davis told The Washington Post.  “We have to work together as a state so we can attract and retain businesses, keep a healthy, strong economy, and not put our jobs at risk.”

Jaime Contreras, vice president of the 32BJ SEIU, told the Post that, if passed, the proposed bill would make them “lose the little remaining faith they have in the Democratic lawmakers.”

The bill would allocate approximately $220 million a year through a complex formula from the EPA’s Abandoned Mine Reclamation Fund to the United Mine Workers Pension and Retirement Fund. The Fund is facing insolvency as a result of bankruptcies in the coal industry. If the fund went insolvent, 125,000 retired coal miners and their beneficiaries could lose their health care and pension benefits.

Now, Senator Joe Manchin is threatening to shut down the government once again unless the Senate passes the Miner’s Protection Act.

If a resolution on the issue of coal miner’s pensions is not resolved, Senate Democrats could shut down the Senate; forcing Trump, who claimed to be a champion of coal miners, into a potentially awkward public showdown.

Tennessee’s Republican Governor Bill Haslam is attempting to pass a plan through the state legislature that would allow him to outsource tens of thousands of jobs. However, the plan is facing resistance, especially among communities affected by the University of Tennessee System. Last week, a group of 20 bipartisan state legislators came out with a letter opposing outsourcing in the University System.

Haslam’s plan is not popular even among faculty administration, and his proposed legislation would allow university presidents to opt-out of privatizing their services. Earlier this month, the president of Eastern Tennessee State University, Bill Noland, said he would not consider outsourcing any of the university’s 228 maintenance jobs.

Having a state job doesn’t always means having a good job. In Texas, where workers lack the right to collective bargain, workers have been organizing with the Texas State Employee Union (a Communications Workers of America affiliate), which has been able to organize 9,500 dues-paying members.

This week, they attempted to put pressure on the state legislature to raise the pay of workers. A new study put out by the union, using data from the State’s Health and Human Services Commission, shows that approximately 6,000 workers receive food stamps. Also, the study showed that 30,000 children of state workers qualify for Medicaid.

The study also showed that low pay and a lack of benefits have led to a turnover problem. According to the data, the turnover rate among Texas state workers is 18 percent, a 15-year high.

Workers are hoping that the study and their activism can put pressure on the state to pass a $6,000 raise for all Texas state employees this year.

(Full Disclosure: Payday Senior Labor Reporter Mike Elk is a member of the Washington-Baltimore Newspaper Guild, an affiliate of CWA. CWA has no editorial control over Payday).

Folks, let’s not lie, every issue of Payday seems to have a long form baseball story in it. Baseball writing remains one of the few areas of journalism where there is still consistently good long form even on social issues.

So we are going to make it a regular feature. Send us your favorite baseball stories each week at [email protected].

This week’s story is from the Writers Guild-represented Vice Sports about Negro League all-star and civil rights pioneer Art Pennington:

Pennington was a switch-hitter, he played every position but pitcher and catcher. In the Negro Leagues, he was a three-time East-West All Star. He even stole bases. But he never got the call from a big league front office. It wasn’t simply the color of his skin—by the mid-1950s, when Pennington was putting up dominant numbers for major league affiliate clubs, plenty of black players had found their way onto major league rosters. Why didn’t Pennington?

The answer lies on the second page of a scrapbook Pennington donated to National Baseball Hall of Fame archives. Pinned to the second page are pictures of all five of Pennington’s wives: Mattie, Mary Ann, Jewell, Anita, and Beth. The last two of those wives had white skin.

“The wife. That was the whole thing,” Pennington told the Los Angeles Times in 2010. “They actually said, ‘Would you leave your wife?’ I said, ‘Man, I wouldn’t leave my wife for all of baseball.”’

Go to Vice to read the whole story and check out the photos.

— The Alt has an excellent long form look at IUE-CWA members on strike in Waterford, New York titled, “Cold, broke, and under surveillance: life on the Momentive Picket Line”:

“It’s really dangerous where the reactors and distillation is,” Johnson said. “There’s a handful of leaders and engineers in there, but they can’t run the equipment, they weren’t part of the day-to-day operations. Little tweaks to the system here and there, these aren’t in the book for you to read about how to keep things in control and in check. I’ll guarantee you they’re not doing half the work we would be, in fear of something going wrong when they don’t have the people to respond to it.”

He and other strikers believe the input of workers and output of trucks are simply for show. A waste of money on hourly scab wages and transportation of very few–if any–materials that could have simply been put towards employee healthcare and retirement. Johnson recalled when strikers once stopped a truck driver who was pulling into the plant around the back entrance. They do this often, to explain their presence and current situation. “A lot of them don’t even know,” Harrington said. “Some of them will back right out and drive away.” This particular driver relayed to the workers that he was pulling in his tractor trailer to pick up only one pallet.

“It’s honestly insulting at this point that the company is hemorrhaging money just to keep us out, just to flex their muscles,” Rossner said. They are concerned about community safety when it comes to the mere two months that scab workers have had to learn the inner workings of the dangerous equipment at Momentive.

— Over at the South Lawn, Douglas Williams and the mysterious Cato the Younger (the pen name of a union organizer, whose union doesn’t always like what we write), has a great look back at how the Lumbee tribe in North Carolina took on the KKK in 1958:

When approximately 50-150 Klansmen were all set to rally, 500 Lumbee, armed with rocks and sticks and firearms swarmed them. Four Klansmen were wounded by gunfire, the rest (including Cole) ran for the woods, leaving behind their families. The sheriff ultimately showed up and dispersed the ‘Klan rout’ after the Lumbee tribe took the Klan’s banner as a trophy, which is pictured above with the leaders of the Lumbee group who confronted the Klan, Charlie Warriax and Simeon Oxendine. Cole was ultimately arrested and prosecuted for inciting a riot, and the Lumbee still celebrate the anniversary of the Battle of Hayes Pond to this day.

Go to South Lawn to read the whole story and the lessons it holds for how to take on racism in the Trump era.

— Finally, Vanity Fair has a long look at how author Timothy Tyson tracked down the woman who falsely accused Emmett Till of sexual harassing her in 1955.