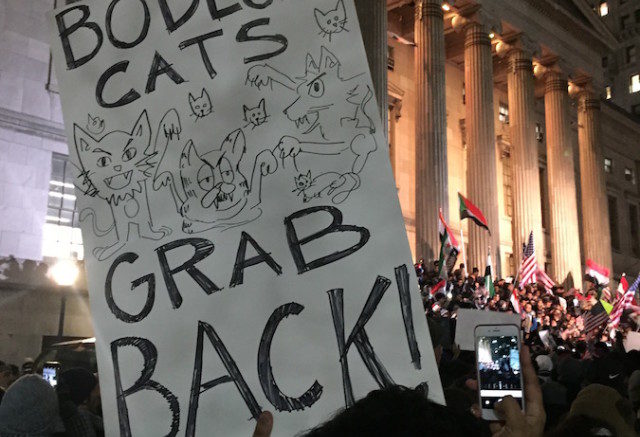 Payday is only $475 short of our winter fundraising drive’s goal. With 10 days left to go, help us reach our goal of $5,000. Please share the link on facebook and encourage others to donate.

This Lunch Pail goes to the 50 writers at MTV News, who opted to unionize with the Writer’s Guild of America today.

Could A General Strike Happen Soon?

In the news business, we have a saying that three is a trend. While activists continue to call for a general strike on February 17, three different groups of workers have gone out on strike against Trump’s Muslim Ban.

In New York City, members of the New York Taxi Workers Alliance struck on Saturday and refused to pick up passengers from JFK. Then, this week, more than 1,000 bodega owners from all over New York City went on strike.

Both strikes involved groups of workers that are independent operators, which means there are no penalties for striking from the law or from their employers.

Legal Penalties Against General Strikes High for Many Unions

Most unions are prohibited by law from going out on strike during the duration of union contracts. Many states also have strike bans on public sector workers, but there are potential avenues to work around such bans.

During the Wisconsin protests in 2011, tens of thousands of teachers and public employees across the state went on a general strike against the state’s proposed anti-union bill, even though, for many, it was illegal to do so. Democratic-controlled municipalities across the state chose simply to not penalize their striking workers.

Experts say that a general strike could still occur. However, they say the energy for such a strike would have to come largely from immigrant workers upset about Trump’s ban and from public sector workers, who see their rights directly under attack. Activists hope that strikes by these two groups, like 2011’s Wisconsin protests and 2006’s 2-million-strong immigrant workers’ strike, could inspire others to do the same.

However, the spontaneous strike by 500 Comcast office workers on Thursday has activists hopeful. Comcast CEO Brian Rogers has signaled that he looks forward to working with the Trump Administration, whose help he needs to skirt anti-trust laws in the future.

The Philly Inquirer has the story:

The Comcast protest in Philadelphia developed over the last two days as employees in Silicon Valley communicated with headquarters employees internally over the messaging platform Slack, said Hai Thai, a Comcast employee and one of the Philadelphia organizers. The group also used twitter hashtags such as #techhasnowalls and #include.

Thai, 38, an immigrant from Vietnam, and Aaron Martin-Colby, 35, a Comcast software engineer who called himself “a very white guy,” led the protesters.

“This is absolutely employee-organized and initiated,” Martin-Colby said, adding that it had met “no resistance” from Comcast higher-ups.

A high-ranking executive showing his support for the event was Sree Kotay, the chief technology officer in the cable division. He did not speak to the crowd.

At Dilworth Plaza, Thai said to the gathered hundreds: “Wow. This is amazing.” He said that in his “12 years at Comcast I have never felt happier than today.”

One thing that could persuade union members to take the risk of a general strike is the threat of “right-to-work.” This week, “National Right-to-Work” legislation was introduced in the House. On Friday, White House spokesman Sean Spicer reiterated that the Trump Administration supported the measure.

However, sources within the union busting community were quick to tell Payday that they saw passage of the bill as unlikely, as the bill’s passage would require 60 votes to pass the all-but-certain Democratic filibuster.

On Wednesday, Republican Kentucky Gov. Matt Bevin signed an executive order that would ban the state from placing the box about criminal history on state employment records.

However, the measure faced criticism as it simply outlaws the box itself but still allows the state to perform background checks on all job applicants. Bevin says that the measure will still encourage job applicants that have criminal histories to consider applying.

“Starting today, if someone comes in and applies, this will immediately be in effect,” Bevin said at a press conference. “So, there are jobs – we’ve actually already hired people who have prior felony convictions, some of them on my immediate team – and so that’s something that has been the case already. It’s now easier for folks like that to get a fair shake.”

In August 2015, the majority black city of Birmingham voted to increase its minimum wage to $10.10. Then, in February 2016, the majority white-dominated state of Alabama passed a law that would forbid municipalities from passing their own minimum wage laws.

A federal class-action lawsuit filed by the Alabama NAACP and the Greater Birmingham Ministries claimed that allowing the majority white state of Alabama to override the democratic will of the majority black city of Birmingham violates the Voting Rights Act of 1965.

The state argues that the measure violates the state’s 2013 ban that forbids cities from passing a higher minimum wage. However, the city attorney for Miami Beach is arguing that a 2004 Florida constitutional amendment allows cities to pass higher minimum wage laws.

Miami Beach’s city attorneys have repeatedly said that they are confident that they will prevail in court. Mayor Philip Levine has been rumored to savor the show down, as he is considering running for governor when current Republican Gov. Rick Scott is term-limited in 2018.

Legislation in Texas would ban “paycheck deduction,” or the practice of deducting union dues directly from paychecks for public employees, making it harder for unions to collect money from their members. KGNS-TV of Laredo, Texas, reports that teachers and other state employees are working to oppose the measures, which carve out exemptions for police, firefighters, and emergency personnel.

Last year, near the end of the presidential election cycle, hip-hop artists YG and Nipsey Hussle released a political anthem called “FDT (Fuck Donald Trump),” which includes lines like, “Don’t let Donald Trump win, that n***a cancer / He too rich, he ain’t got the answers.” Since inauguration day, there have been a string of incidents in South Carolina, Tennessee, and other states, in which radio station signals have been hacked to play the song on an endless loop. The Verge reports that many stations’ internet-connected antennas are insecure, making them easily hackable. Read about the ongoing exploits of the still-unidentified radio pirates and check out the song here.

27-year-old outfielder Kyle Johnson, a career minor leaguer with five years of experience under his belt (yet makes only $12,000 a year playing baseball), has became the first minor league player to speak out. Not only did he call out major league baseball, but in an interview with USA Today he also called out the Major League Baseball Players union for not supporting their efforts:

“If I knew that, no matter what affiliate I would be at, I had a bed, I had a place to stay where there was heat or air conditioning, depending on the season, if I knew I had a stable place where I could bring my wife and bring my kids and not have to scramble, that would be a huge burden off me,” Johnson said. “Somebody needs to start raising these questions, and start speaking out loud about it, otherwise it’s never going to change. The rest of the world is adapting and growing and getting better at things, and we’re not. It doesn’t make sense.

“Why doesn’t the MLB union also include minor league players? Why don’t we have a voice in that union, or why doesn’t a Major League player — that went through the struggle and grinded for six years and finally made it – why aren’t they a part of this, or advocating for the players? The Major League guys try to take care of us when they can, but they only do so much. I don’t understand why there’s such a disconnect between MLB and MiLB. We all came from the same place. We all work through the same system.”

The Bitter Southerner profiles Southern women (and a few men) who attended the Women’s March on Washington inauguration weekend. The feature, “Why I Marched,” includes photographic portraits and quick interviews with many participants who drove up from the Deep South to take part in the historic protest. One featured woman, Ruwa Romman, had this to say:

I’m marching because I’m a Muslim woman raised here in the United States, in the South. I want to represent the best part of who we are, the fact that we don’t necessarily support all of this, but also that we firmly stand for people’s rights, everyone’s rights from women, to disabled, to the LGBT community, and everyone who needs to be stood up for. If we don’t stand up for other people, there won’t be anybody left to stand up for us. I’m really hoping that it’s a reminder of decency and hope.

Orange Coast, the lifestyle magazine of Republican stronghold Orange County, California, has an engaging profile of Tefere Gebre, the newly elected executive vice president of the AFL-CIO. “The Three Lives of Tefere Gebre” recounts his rise from a teenage refugee to a shit-kicking labor organizer who tied the labor movement to Southern California’s immigrant and refugee populations and built bridges between the needs of the working class, unions, and the Democratic Party:

In conjunction with the American Civil Liberties Union and cleric organizations, Gebre also held citizenship classes in union halls, aimed at O.C.’s estimated 240,000 green-card holders. Those periodic sessions also served as “one-stop shops” offering legal counsel, credit union loans, English classes, and more. Outreach efforts to the county’s large but previously marginalized Vietnamese community brought them into the fold. Gebre appeared frequently on Vietnamese TV shows and sent voter registration canvassers to engage them. “We didn’t talk politics. We discussed issues like houses foreclosing, social services, education … .” Noting that it would be illegal to register voters solely for one party, he adds, “We didn’t ask people what party they were with, but we did choose which neighborhoods to canvass.”

The Undefeated shares the history of the 1965 American Football League All-Star Game. After facing unrelenting racism from New Orleans’ locals, cab drivers, and bouncers, the black stars voted to boycott the game, which was then moved to the more hospitable city of Houston at the last minute. One of the more harrowing anecdotes of the abuse the black athletes met begins:

“We said, ‘James Brown! Let’s check it out!’ ” Westmoreland recalled, thinking for a moment that maybe they had stumbled upon a black club. “We got to the doorway – they had doorkeepers at all of the clubs down there – and the guy said: ‘Y’all can’t come in here.’ My friend Earl Faison saw the gun, but I didn’t see it at the time.”

Neither did Ladd. The sack artist, who later carved out a second career as a pro wrestler, segued into his gregarious persona: “I’ll snatch these doors off [the hinges]. What do you mean I can’t come in?” said Westmoreland, quoting the gargantuan tackle who died in 2007.