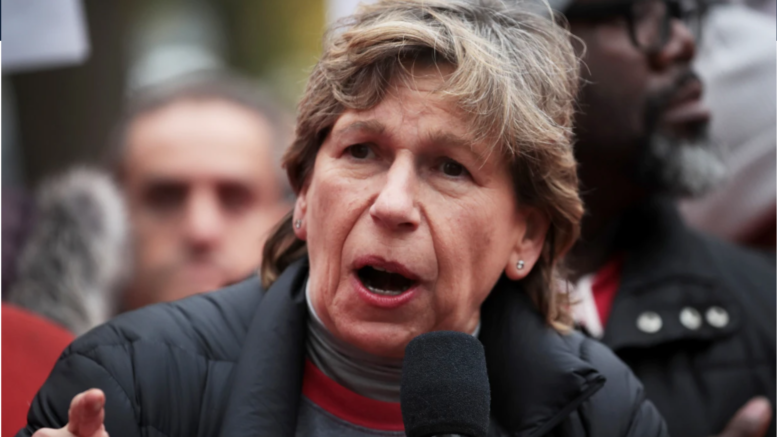 In December of 2012, following the Sandy Hook Massacre, I interviewed the American Federation of Teachers President Randi Weingarten for In These Times. While some unions have started taking positions on gun controls, many unions still don’t do enough to push gun control. The piece is worth a read in its whole to et a sense of the work that the labor movement has done and still has to do on guns.

“The teachers and the principals were absolutely heroic. So were the others, who were in lockdown, and kept their kids calm and quiet in what had to be a traumatizing fear. I don’t think it is possible, if one was not that in that situation, to understand the depth of the heroism of teachers who put themselves in the line of fire to save children,” said Randi Weingarten, sobbing as she spoke, in a phone interview with Working in These Times on Wednesday night. ​“This has kind of pulled the curtain away to show who teachers really are. Teachers’ instinct is to serve, to protect and to love. And you saw that in full view in Newtown this week. This is who teachers are. If we were in the same position, we would do the same thing; I hope that I would do so.”

Weingarten is president of the one-million-strong American Federation of Teachers (AFT). She is accustomed to defending the teachers who make up her union from budget cuts and anti-labor legislation, but not from armed gunmen in the schools where they work. Yet on Friday, six members of Newtown Federation of Teachers Local 1727, an AFT chapter, were killed in the Newtown, Conn. shooting. Many took heroic steps to protect their students, such as 27-year-old teacher Victoria Soto, found dead after herding her students into a closet for safety, and 52-year old special education teacher Anne Marie Murphy, who was killed shielding students from bullets with her body.

Weingarten has been a controversial figure, after being cast as the villain in the anti-teachers-union documentary Waiting for Superman. But after seeing six of her union’s members gunned down at Sandy Hook Elementary, Weingarten is ready to launch one of the most controversial political crusades of her career: gun control.

​“Teachers lost their lives protecting their kids, lunging at a gunman with an assault weapon. We should be getting guns out of society,” says Weingarten. ​“If someone wants to hunt, they can hunt. The Second Amendment allows people to bear arms, and they should be able to, but we need reasonable common sense gun control.”

Weingarten is calling for the reinstatement of the assault weapons bans, limitations on rapid-fire ammunition, improved background checks and ​“serious consequences if a gun turns up in the hands of someone other than the registered owner.”

In pushing for gun control, Randi Weingarten faces a battle for support not only with the general public, but also within the labor movement. Labor’s predominantly white male leadership has been reluctant to take up the issue, despite homicide being the third leading cause of workplace deaths for American workers and the number one cause of workplace deaths for women.

Upon request for comment, AFL-CIO spokesperson Alison Omens told Working In These Times, ​“This is not an issue the AFL-CIO has had a position on in the past.”

To United Electrical, Radio and Machine Workers of America (UE) Political Action Director Chris Townsend, ease of gun access is indicative of a larger problem with American priorities. ​“Today it’s easier to get a gun than it is to get a job —and far easier to get a gun than to find a decent job where you can improve your condition and contribute something to society,” he notes.

The UE, which represents many of the first responders who arrived at the scene of the Newtown shooting, has no position on gun control. Townsend explains, ​“When the list of topics that a union might address or confront is laid out, ​‘guns’ would be far down the list, if on it at all. Unions exist in only a small fraction of the workplaces in the U.S., and we exert a limited influence where we do exist. And it’s even harder than that, as you know, since the NRA uses the issue against unions in a far more effective way that they should be able to.”

Indeed, during union drives, particularly in the South and Midwest where hunting is popular, bosses often tell workers not to join because unions fund Democrats who want to take their guns away.

In response, unions ​“remind the workers that if they really want to find out who is for gun control, they might try bringing their gun to work the next day,” jokes Townsend. ​“We advise them to call us from the jailhouse, since they will be arrested – and fired.”

(In fact, earlier this year, In These Times released a confidential Georgia Pacific Code of Conduct that strictly prohibits employees from bringing guns onto company property. Ironically, the Kochs, who own Georgia Pacific, fund many libertarian organizations that advocate against gun control).

Communication Workers of America President Larry Cohen, who is noted for being one of labor’s more progressive leaders and whose union represents many police—who are typically pro-gun-control—says his union also does not have a position on gun control.

​“Not an issue taken up in our union. We have quite a complex set of issues linked now for economic justice and democracy,” wrote Cohen in an email to Working In These Times.

The topic of gun control came up this Monday at the AFL-CIO’s weekly meeting of legislative staffers from unions that comprise the labor federation. According to AFL-CIO Government Relations Director Bill Samuel:

​“The staffer who handles justice issues informed the group that the [AFL-CIO] had not taken a position on gun control since the early ​’90s when Kirkland was president and the federation endorsed the assault weapons ban. Others spoke pro and con to the idea that the [AFL-CIO] should take a position during the current debate. One person argued that it was a labor issue (an issue of workplace violence); another that it wasn’t really a labor issue and that reaching a consensus might prove difficult.”

AFT’s Weingarten is hoping to engage labor leaders on gun control, as well as the need for better mental healthcare access.

​“We are engaged on this issue and I hope several of my colleagues would engage on this issue too,” says Weingarten. ​“We have lots of people across the country who are hunters and believe in hunting. I respect them and I respect that. No one is changing that. There is some reasonable compromise, though, that can be made so we don’t have a society where kids and teachers or people in a mall are afraid of being murdered by someone who has a gun.”

National Union of Health Care Workers President Sal Rosselli says he is ready to stand with Weingarten on the issues of gun control and mental healthcare. Rosselli says that it’s important for unions to engage on guns because labor’s most recent membership gains come primarily among women and people of color, who are disproportionately affected by gun violence.

Randi Weingarten says she wants to lead a discussion within the labor movement on the issue.

​“I think people should think about the fact that people gave their lives to try to stop these killers from massacring kids, and it should give a lot of pause to elected officials, and it should give the NRA pause,” says Weingarten, taking a breath to regain her composure. ​“This is not okay. We regulate driving, we regulate everything else in the schools, and we can’t regulate guns?”

Be the first to comment on "#TBT from 2012: A Grief-Stricken Randi Weingarten Engages Hesitant Unions on Gun Control in Wake of Sandy Hook"