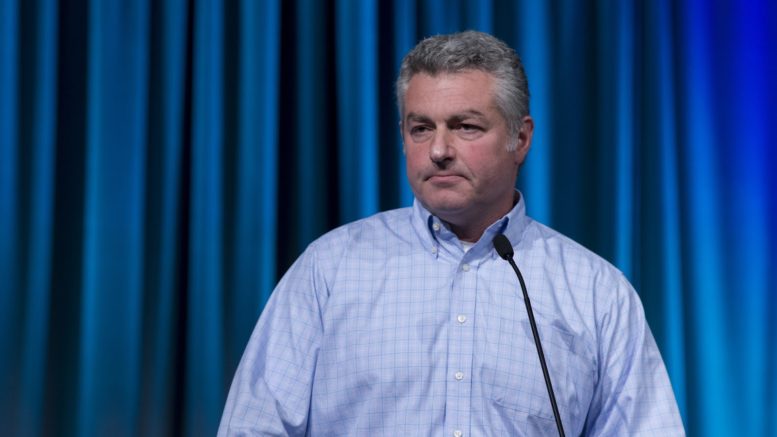 Payday Report has learned that one of the largest Service Employees International Union locals in the country, California-based SEIU-UHW, has been sued in Alameda, California for sexual misconduct and assault committed by a top SEIU official against one of its former organizers. The lawsuits, obtained by Payday Report, accuses SEIU Vice President Dave Regan, who also serves as President of SEIU-UHW, of engaging in sexual misconduct.

The lawsuit comes as SEIU has faced criticism from within the labor movement, which has led to 6 top SEIU officials, including former Fight for $15 Director Scott Courtney, into either being fired or leaving the union voluntarily.

It’s not the first time Regan has faced accusations of misconduct. In 2016, Regan was investigated for physically attacking and pushing down a flight of stairs a lawsuit server, who was sent to his house to serve him with court documents.

The lawsuit filed by 40-year-old SEIU-UHW staffer Mindy Sturges is the first filed by an SEIU staffer against the union for sexual misconduct. Given the nature of discovery in trials, the lawsuit could produce volumes of evidence that could shine a light on why so many of SEIU President Mary Kay Henry’s top political allies were allowed to get away with sexual misconduct and retaliation against those who reported it.

Previously, SEIU-UHW had faced criticism from #MeToo activists for their role in the hiring of Pedro Malave, who left Boston-based SEIU affiliate 32BJ in the summer of 2014, after an internal investigation found that he sexually assaulted another staff member.

Despite the internal investigation’s finding and the efforts of the woman who was assaulted to see him permanently banned from the union, Malave was allowed to be rehired by SEIU-UHW.

Malave was only fired from SEIU-UHW after Payday Report published an expose in November of 2017 documenting how Malave was able to regain employment at SEIU after an internal investigation found that he sexually assaulted another union staff member.

SEIU-UHW has long faced criticism as one of the most corrupt and undemocratic union locals in the country; leading many #metoo activists to believe that the undemocratic culture within the union has bred a culture where misogyny and sexual misconduct flourish.

Then, in a controversial move, and without a vote of the membership, SEIU international forced all 200 elected shop stewards out of office and again, and installed Dave Reagan to run SEIU-UHW.

In 2011, the federal National Labor Relations Board found that SEIU-UHW leadership illegally colluded with Kaiser Permanente to retaliate against workers, who favored NUHW over SEIU in a union election between the two rival unions. Finding that SEIU-UHW engaged in illegal conduct in collusion with the company, the NLRB threw out the union election results and ordered that a new union election be held.

The targeting of NUHW union members by SEIU international staffers being sent into California to target NUHW activists battling SEIU-UHW created a culture of intimidation and domination within the union, where staffers regularly targeted other SEIU staffers, who wouldn’t go along with plans to smear NUHW activists.

Many #meetoo activists say that the culture of bullying within SEIU-UHW made it a workplace where sexual misconduct could easily flourish since many low-level SEIU staffers were scared of upper-level SEIU International management sent into to bust the NUHW.

The lawsuit filed by Sturge also accuses SEIU-UHW of knowingly hiring organizers such as Malave who have been accused of sexual misconduct in other parts of the union.

According to the lawsuit: “Sturge and other women employees, and women union members were the subjects of inappropriate remarks that addressed their looks, their bodies, and their availability/interest in relationships. Sturge was also subjected to offensive touching, and she and others were discussed in inappropriate texts and in comments heard by or related to Sturge”.

Sturge reported the comments to SEIU-UHW management on several occasions, but no investigation was undertaken until Sturge was physically and sexually assaulted by Hatcher in September of 2017.

When Sturge finally did report the incidents, the lawsuit alleges that Regan, who was responsible for investigating all claims as President of the SEIU-UHW, verbally abused and berated Sturge in front of other staff members.

In November of 2017, Hatcher was reportedly fired from SEIU-UHW for violating SEIU’s non-fraternization policy, but the union took no disciplinary action against him for engaging in alleged sexual misconduct and assault. Nor was an action taken against SEIU UHW President Dave Reagan for harassment of Sturges.

During this time period, the lawsuit alleges that Hatcher and his allies made social media posts and verbal comments accusing Sturge of lying about the story and trying to shake down Hatcher and the union for money after engaging in a consensual sexual relationship with Hatcher.

The lawsuit alleges that that “SEIU-UHW and its agents furthered the false and defamatory narrative about Sturge by announcing to others, both internally and externally, that Hatcher was fired for violation of the union’s non-fraternization policy as opposed to Hatcher having violated SEIU-UHW’s anti-harassment policy and/or having assaulted Sturge. This gave rise to the implication that Sturge and Hatcher had a consensual relationship or that his termination was the sole result of his consensual relationship(s) with other union staff and/or members”.

In February of 2018, Payday Report exposed how SEIU staffers in Massachusetts smeared women who accused Lee of sexual misconduct on social media.

In February, shortly after the Boston Globe published an article outlining allegations against Lee, SEIU1199 Massachusetts staffer Teia Searcy posted on Facebook that “the whole #metoo shit GOT the WHORES coming out” and added an emoji featuring a hand with a middle finger raised and the hashtag #karmaisabitch.

As a top official in the multi-state local, Turner is one of several officials whose input will play a key role in the decision over whether to retain Lee after allegations of sexual misconduct. By liking a post labeling #metoo activist as “whores,” Turner has sent a chilling message that could prevent future #metoo activists within SEIU from coming forward.

In response to Searcy’s initial post accusing #metoo activists of being “whores,” Turner’s sister, who uses the Facebook name, “Sugsweetthang Turner,” posted in reply: “Saying me too now, but was screaming me first then while they were on their knees!”

The smear campaign ultimately may have helped Lee keep his job. Despite numerous allegations of sexual misconduct made by numerous staffers, Lee was simply demoted from the union and allowed to keep his job.

The current lawsuit brought by Sturge could force SEIU’s top leadership, including President Mary Kay Henry, to answer hard questions about why so many top union leaders have been accused of sexual misconduct and why so many of them have been able to keep their jobs.

SEIU did not immediately return a request for comment on the allegations brought forth in the lawsuit.

If you were sexually assaulted in a union and would like to tell your story, please contact us confidentially at [email protected] or call (412) 613-8423. There is no place in the labor movement for sexual misconduct.