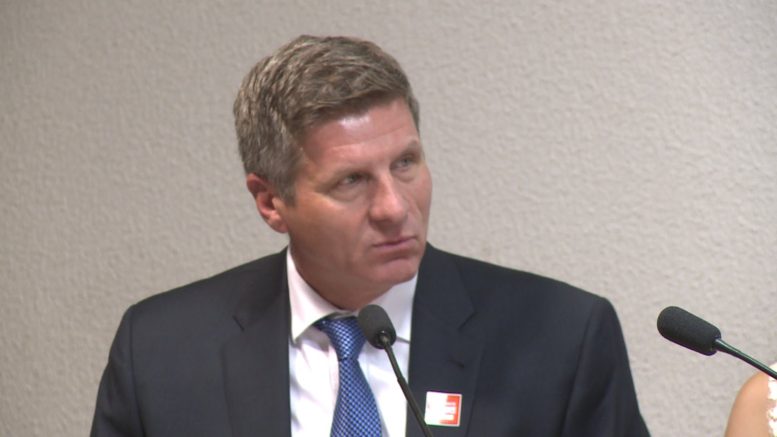 Payday Senior Labor Reporter Mike Elk is in his hometown of Pittsburgh preparing to interview Harry Belafonte at Carnegie Music Hall this evening.

This week, women using the #metoo hashtag have captured the attention of the nation, highlighting the prevalence of sexual harassment in the workplace. The online campaign, sparked by the publication of stories from producer Harvey Weinstein’s decades of sexual assault and harassment, also led to several other men being forced out of their jobs, including Amazon Studio CEO Roy Price and Vox Media’s Lockhart Steele.

Now, it appears that labor leaders are grappling with how to deal with allegations of sexual harassment within union culture. Already, SEIU has suspended top SEIU international official Scott Courtney, who oversaw funding the Fight for $15 campaign and the controversial trusteeship of the California-based United Healthcare Workers.

Labor reporter Cora Lewis at the non-union Buzzfeed  got the scoop:

Seven people who have worked with Courtney, including current and former SEIU staffers, told BuzzFeed News the top official had a history of sexual relationships with young women staffers — who were subsequently promoted, they said.

The sources spoke on the condition of anonymity for fear of retaliation within the labor movement.

Two also said no significant action was taken after staffers reported abuse and sexual harassment by supervisors — who reported to Courtney. “Nothing happened on those campaigns without Scott knowing,” one of the sources told BuzzFeed News.

According to a source within SEIU and SEIU’s governing documents, suspension is the highest form of action Henry can take within her authority as union president against a union officer at Courtney’s level.

For an executive vice president to be removed from his or her position, the union must go through an official proceeding by the union’s internal executive board, its second highest governing body.

SEIU Investigation Could Widen to Other Union Leaders

“In my years in labor and academia, I have found that unions and universities are no exception when it comes to sexual harassment problems, and just like in every other workplace, women face sexual harassment,” acclaimed Cornell Labor Studies Professor and veteran union organizer Kate Bronfenbrenner told Payday.

Bronfenbrenner Talks Sexual Harassment She Experienced in the Labor Movement

Bronfenbrenner says that longtime former SEIU Organizing Director John B. Geagan sexually harassed her when she was a 26-year-old organizer. She says that Geagan had a rule that women who worked on organizing campaigns would have to wear short skirts, go out to dinner with him, and ask them to come up to his hotel room.

Working on a campaign organizing clerical workers in 1981 in Connecticut, Bronfenbrenner says she experienced sexual harassment from Geagan.

“He liked to look at legs. We were organizing older women, clerical workers. It was not good, for them, for us to be wearing short skirts, but for him, it’s what he wanted. So we were given orders to wear short skirts and high heels, even though we were on our feet from six in the morning to eight at night.”

“Women in leadership positions should never, ever force younger women to go along with men,” says Bronfenbrenner. “Often, other women would say, ‘Oh well, he’s harmless, he just grabbed her ass.’”

During the clerical worker’s campaign, Bronfenbrenner said she and two other experienced union organizers stood up and told women to not tolerate it. She says that many women resisted his behavior but that many young women that were right out of college didn’t protest.

“I encourage women to say ‘no,’ and that they shouldn’t be surprised by how ‘no’ works more often than they think,” says Bronfenbrenner. “And women should know that in the labor movement that they will find more male allies than they expect. Sometimes, they won’t find allies, but there are many allies in the labor movement who will support them, and they should say ‘no.’”

Bronfenbrenner gives a lot of credit to the Steelworkers for having a strong zero-tolerance sexual harassment policy and encourages other unions to develop similar policies.

As a veteran labor reporter with a decade on the beat, Mike Elk knows that sexual harassment is widespread in the labor movement.

“As a labor reporter tasked with mentoring younger labor reporters, I have had to personally chaperone younger female labor reporters on drinks with sources because of how intimidating some men in the labor movement can be,” says Elk. “And it’s not just women. I have had young gay men tell me about older gay union leaders that would grab their legs and attempt to seduce them.”

Payday has learned that several union officials under investigation by other labor reporters have threatened to sue if reporters print allegations. As the corporate officer entrusted with the responsibility to decide what is legally permissible to print, Elk says that he will not be deterred by such threats of litigation.

Elk encourages union activists wanting to talk to him about their experiences with sexual harassment within the labor movement to contact him at [email protected] or at (412) 613-8423.

— David Graham writes a remembrance of Thelonious Monk, in the Atlantic for what would be the late composer’s 100th birthday. Monk, a brilliant and idiosyncratic piano player called the High Priest of Bebop—and a native of Rocky Mount, North Carolina—continues to hold a great influence over the contemporary jazz world:

“We’d be seeing more for Monk’s 100th birthday if we hadn’t been celebrating Monk more than any other jazz composer for the last 20 or 30 years,” the pianist, composer, and writer Ethan Iverson, tells me.

Monk’s piano style, with its crunchy dissonances, forceful attack, open spaces, and off-kilter rhythms, has deeply imprinted itself both on pianists and on other instrumentalists and vocalists. Fellow pianist Jason Moran combines Monk’s wry hipness, virtuosity, and feel for the blues, including in a powerful multimedia work, “In My Mind: Monk at Town Hall, 1959,” that explores his relationship with Monk’s music, the history of black America, and recordings of Monk rehearsing and dancing, the sounds of which Moran’s band blends with its own. Vijay Iyer’s avant-garde excursions borrow from Monk’s percussive experimentalism. The greatest living jazz musician, Sonny Rollins, was a sideman and student of Monk’s, while Kamasi Washington, the music’s hottest young property, recently told The Root, “If you’re a jazz musician and you think you’re not influenced by Thelonious Monk, either you’re not a jazz musician or you are influenced by Thelonious Monk.”

The win is a dramatic victory for the UCW, a CWA affiliate which, despite lacking collective bargaining rights, has built a local of 1,700 dues-paying members. The local built over 20 years is able to maintain strength because they can hire organizers through the voluntary dues of their members.

The Labor and Working-Class History Association has a long look at UCW-CWA’s successes and challenges in Tennessee:

Our state government’s hostility to organized labor has arguably increased since the UCW’s early-days successes in gaining cost-of-living raises. In 2015, UT president Joe DiPietro fielded to the board of trustees the concept of “de-tenuring” faculty to solve alleged revenue problems. Reports of DiPietro’s proposal galvanized UT faculty, and prompted tenure-track faculty to join UCW-CWA in unprecedented numbers. DiPietro later walked back his statement, but the current climate has convinced many professors that their lot may soon be cast with their contingent colleagues. The seeming tenure emergency, and the resultant interest in organizing, was also an opportunity for faculty to learn more about the low pay and tenuous employment situation of many of the staff they depended upon.

In the last two years, UCW-CWA’s greatest challenge has been the ongoing campaign to prevent the outsourcing of campus jobs. Since 2015, Tennessee governor Bill Haslam has pushed to hire out many state jobs, particularly campus facility services, to the property management firm of Jones Lang LaSalle (JLL), a company in which the governor is personally invested (Haslam, a billionaire, is the one of the wealthiest elected politicians in the U.S.). Haslam contends that out-sourcing will reduce operating costs, although many observers— including very fiscally-conservative members of the Tennessee legislature— remain skeptical. UCW-CWA, Jobs with Justice, and other allies believe that outsourcing would produce a net loss of jobs in one of the nation’s poorest states, and would lower quality of service on our campuses. Further, JLL employees would receive reduced income and health benefits than actual state employees, thus increasing the burden placed on the state to provide them with food stamps and other social services. Such a shift would make state employment more like the fast food service economy. Contingent faculty at UT suspect that an analogous plan might be attempted with their own jobs in the future.

— Keri Leigh Merritt, a 19th Century American historian and the author of Masterless Men: Poor Whites and Slavery in the Antebellum South,  is featured on Rep. Keith Ellison’s We the Podcast this week. Check it out for free through iTunes.