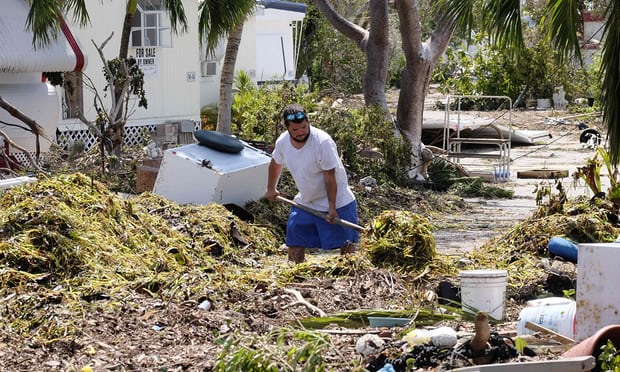 Hurricane Harvey clean up workers in Houston, Texas. (The Guardian)

Payday Report has learned that a flesh-eating bacteria has killed a hurricane cleanup worker in Galveston, Texas. Out of respect for the family, Payday is not releasing details yet, but we will be providing them in the forthcoming days.

Yesterday, Payday Senior Labor Reporter Mike Elk, in an investigative piece published by the Guardian, warned that undocumented workers’ lives were being put at risk. The article exposed that the Trump Administration’s Occupational Health and Safety Administration (OSHA) is failing to coordinate training with undocumented day laborers engaged in the cleanup work, according to complaints by former top OSHA officials and Latino health and safety organizers on the ground in Texas.

Reporting for the Guardian, Elk wrote:

The mainland US death toll for the two hurricanes, which battered Texas and Florida in August and September, now stands at approximately 200 people. But according to Jessica Martinez, executive director of National Council of Occupational Safety and Health (Cosh), a nationwide network of workplace health and safety groups, a greater number of people will die cleaning up in their wake “if more resources aren’t put into health and safety training from post-cleanup”.

José Garza, former associate deputy assistant secretary for policy at Department of Labor under Obama, and now executive director of the Texas-based Workers Defense Project, said he had been working with more than 60 organizers in communities in Texas since the storm and had yet to meet with any high-ranking government officials. “Ultimately, the lives of workers are too important for us to sit back and do nothing,” he said.

Now, one day after Elk’s investigation revealed that OSHA was failing to help undocumented worker groups train workers, Payday Report has learned that a cleanup worker was killed by a flesh-eating bacteria.

“Today, a Texas family in Galveston will go to bed without their loved one. It is unacceptable for contractors to expose workers to dangerous, life-threatening conditions,” said Jose Garza, a former Obama Administration Labor official, and the executive director of the Workers Defense Project. “We must hold contractors accountable and ensure that Texas workers have access to good, safe jobs while rebuilding Harvey-affected areas.”\

The death comes at a time when immigrant rights groups are hiring workplace-safety organizers themselves to make up for the lack of OSHA inspectors.

“Houston will be rebuilt by undocumented workers, and they are more likely not to get the safety training they need and be victims of wage theft,” said Garza. “Our organization and others are trying to make sure that there are trainings available for them”.

But more than that, Garza sees workers gaining confidence in themselves as activists as they learn to stand up for their right for safe working conditions.

“It’s about teaching workers to have the agency to speak up on a site, to make sure that they are as safe as possible,” says Garza. “That has been and is continuing to be a real focus of organizations as recovery moves forward.”

Be the first to comment on "BREAKING: Flesh-Eating Bacteria Kills Hurricane Clean Up Worker As Trump’s OSHA Criticized for Inaction"