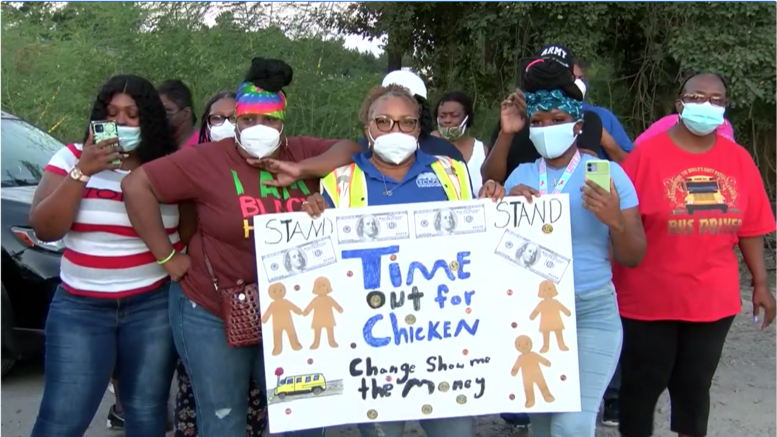 Greetings from the Burgh, where we are getting back into the swing of things after a long four-day weekend celebrating both Labor Day and Rosh Hashanah. L’Shana Tova and solidarity to all!

Earlier this week in Savannah, Georgia, 54 of the 200 bus drivers in the Savannah-Chatham’s school district went on a wildcat “sick out” strike over pay and other issues.

Workers said they were upset with their low pay and with the district who maintains that bus drivers must keep allowing students who don’t wear masks on buses — a rule that bus drivers contend with.

The wildcat action wasn’t sanctioned officially by the bus drivers’ union, the Teamsters. So, the union then formally sanctioned its shop steward, Kendrick Banks for participating in the unsanctioned, possibly illegal, action and removed him from his position as the union’s shop steward.

Several union members, including Banks, resigned from the union as a result of his removal, according to the Savannah Morning News.

Banks says he’s glad, though, to help organize the wildcat.

“Literally enough is enough,” Banks told WTOC. “We have tried several forms of communication as far as sitting in the office, talking to them to try to negotiate some issues and the answer is always the same, we are working on it. So today we decided not to move the buses because why…we are working on it.”

For more, check out WTOC.

In rural Bradford, Pennsylvania, McDonald’s workers have walked out over low pay and poor management.

Workers at the store said the walkout was partly inspired by seeing local retail workers, including some of their co-workers, easily find better-paying jobs at other local retail places, including Sheetz, Tim Hortons, and even Walmart.

The walkout came after more than 100 McDonald’s workers and customers in the Bradford area signed a petition asking management to do better, but when management refused to address the petition, workers decided it was time to walk out.

“They all decided to walk out because they had finally had enough,” one worker told The Bradford Era.

For more, check out The Bradford Era.

On Monday, over two dozen nurses from the University of Alabama-Birmingham hospital walked out over unequal pay.

The UAB nurses, who are members of the Alabama State Nurses Association, said they are paid 8% less than nurses in neighboring states despite working at one of the largest, most prestigious hospitals in Alabama.

“Many of our patients that are coming in with COVID are unvaccinated. That has really increased patient load and stress on nurses,” Alabama State Nurses Association President Lindsey Harris told The Birmingham News.

For more, check out The Birmingham News.

The response to help us replace a $10,000 expired grant to keep our Strike Tracker going has been overwhelming.

Please, sign up today as one of our 624 recurring donors.

Marvin Miller Inducted Into the Hall of Fame, But Family Refuses to Attend

Earlier today, Marvin Miller, the first executive director of the modern baseball players’ union, was inducted into the Baseball Hall of Fame.

However, years before his death in 2012, Miller said he never wanted to be inducted into the Hall of Fame. For years, Miller, who before heading the players union was a Steelworkers economist and never played baseball, insisted that players union activist Curt Flood, whose All-Star career was caught short by black-listing, be inducted in his place instead.

Miller said he found the whole Hall of Fame process rigged by management. As a result, Miller’s family said they would attend his induction ceremony out of respect for Miller’s last wishes.

“He wasn’t interested in fame,” his son Peter told Sports Illustrated. “A lot of people didn’t understand that that isn’t what drove him. What drove him was the solidarity of a union and free agency—freedom. That’s what he cared about. He really did not seek personal fame for himself, and that’s, I guess, another reason that he didn’t seek induction to the Hall. He didn’t want to make it all about himself.”

For more, head to Sports Illustrated.