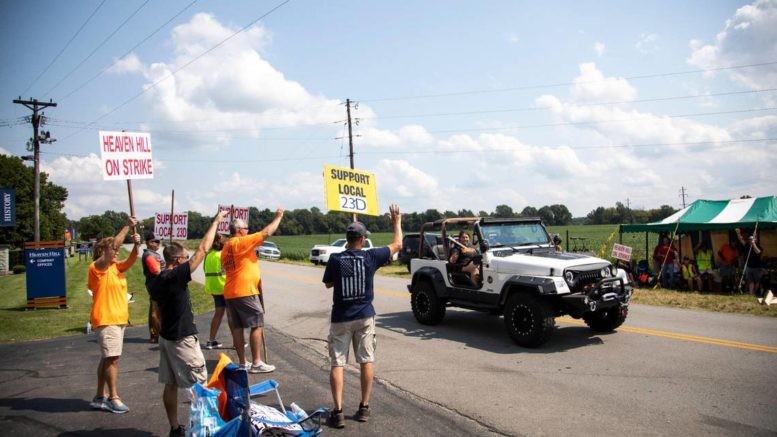 Greetings from the Burgh, where fall is slowly starting to settle in.

On Monday, over 400 UFCW Local 23-D members went on strike at Heaven Hill whiskey in Bardstown, Kentucky, after workers voted down a proposed contract by a margin of 372-13.

Workers say that Heaven Hill’s wages are well below the wages of other unionized whiskey makers in the Bardstown, Kentucky area. In addition, Heaven Hill is asking workers to work on weekends when the distillery typically only operates during weekdays.

“During the pandemic and all that, the company has told us, we’ll remember you all during contract time. Well, contract planning is here,” UFCW Local 23-D project chairman Jerry Newton told WDRB. “They have showed us no appreciation.”

For more, check out WDRB.

Today teachers in rural New Bethlehem, PA, with a population of roughly 900, went on strike after the school board refused to offer a counter-proposal to the union, which had earlier attempted to push back on concession demands by the school board.

The strike comes after the school board proposed that the teachers’ union, the Red Bank Valley Education Association (RVEA), accept a two-year wage freeze and pay more for healthcare out of pocket.

“When we left the meeting on September 8, the board assured us they would have a comprehensive proposal,” said the RVEA in a statement they posted on Facebook. “The board is clearly trying to play the public relations game and give the appearance of trying to settle.”

For more, check out Explore Clarion.

One-Third of the Way to Replacing Expired Grant

As a result of our readers’ donations, we have raised $3,256 and are nearly one-third of the way to replacing a $10,000 expired grant to keep the Strike Tracker going.

If you can, please support our work by donating and helping us make up this hole in our budget.

The best way to support us is to sign up as one of our 624 recurring donors today.

We know lots of strikes are on the horizon — Donate today to help us keep tracking them.

This week, over 10,000 John Deere tractor workers from across the United States are voting on whether to strike at ten different facilities.

The company is demanding that workers, who currently pay no health care premiums, pay 20% of the healthcare premiums. In addition, John Deere is asking for an end to overtime pay if they are asked to work more than eight hours in a day.

Results are still coming in, but the largest UAW local of John Deere workers, UAW Local 838 in Waterloo, Iowa, voted to strike by a margin of 99.37%, according to the union’s Facebook page.

Payday will be following the story and update as more becomes known.