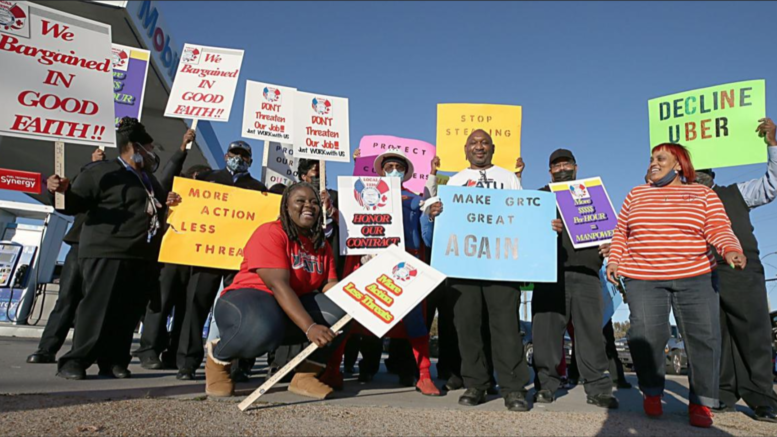 Greetings from the Burgh, where my emergency dental surgery went off without a hitch, and I’m now back in labor-reporting mode.

In Richmond, Virginia, bus drivers are up in arms after the city announced they’d rather subsidize Uber rides than meet the union’s demands to fix understaffing issues.

The subsidized rides are intended to offset service cuts between 11 a.m. and 6 p.m. due to the bus driver shortage. Bus drivers fear it will lead to outsourcing their work to Uber and subsidizing late-night partiers who would be using Uber anyway.

“We need to work together to make this a better company. … I want it to get back to where it was when I started here in ’87,” ATU local 1220 union president Maurice Carter told the Richmond Times-Dispatch. “The way the company is being run, people just don’t want to stay here. I’m a second-generation GRTC employee, and right now, the atmosphere the way it is, I wouldn’t recommend it for one of my kids.”

For more, check out the Richmond Times-Dispatch.

In recent weeks, North Carolina, which bans collective bargaining for public employees, has seen a wave of strikes from school bus drivers.

Now, school workers in North Carolina are winning bonuses, and some small raises thanks to their activism. The money for the bonuses and raises comes from federal American Recovery Act stimulus dollars.

Last week, when teachers in Smithfield’s Johnson County threatened to strike, teachers won retention bonuses of $1,250. In October, when school bus drivers threatened to strike in Winston-Salem, the district offered to help the school board approve additional long-term wage increases for them.

Finally, in Raleigh’s Wake County, where both school bus drivers and cafeteria workers went on strike, the local school board approved three one-time payments of $1,250 for a total of $3,750.

“While we have some progress in this budget, we still have a ways to go before we are fully funding our public schools,” North Carolina Association of Educators President Tamika Kelly told WTVD. “Many of our educators will see little to no raise in their paychecks. And we still have our classified staff who need to be adequately paid for a living wage.”

(Be sure also to check out the Guardian’s Michael Sainato’s extended look at the record strikes of school bus drivers across the US.)

In Burlington County, New Jersey, nursing home workers at nursing homes recently taken over by Complete Care are on strike. In an attempt to fight the union, the company is offering scabs $55 an hour plus a $1,000 bonus to cross picket lines.

From the Burlington County Times:

Ellen Melton, a nurse at the site for 24 years, said Complete Care changed healthcare coverage, increasing out-of-pocket expenses, including a four-fold hike in medication needed to treat her husband’s ongoing health concerns. He may now need surgery, she says.

“All because they won’t approve the medication,” Melton said through tears.

For more, check out the Burlington County Times.

Tomorrow is a big day as workers go on strike at UPMC hospitals here in Pittsburgh. Payday will be out in the streets, but we need your help to pay for the coverage.

Donate today to help us cover the costs of our reporting tomorrow.

Also, please consider signing up as one of our 632 recurring donors today.

Thank you to everyone who chips in and supports our work.

This week, OSHA announced that a Smithfield plant in Sioux Falls, where more than 1,600 workers got COVID, and four workers died, would only pay a fine of $13,494 in fines.

The plant also agreed to work with OSHA to set up a safety committee to monitor issues in the plant.

However, not only did the UFCW blast the small settlement, but it also denounced OSHA for not involving the union in setting up the settlement.

“We feel the betrayal is not letting us through the door to be a part of this,” UFCW Local 304A President BJ Motley told KELO.

The union said the settlement “allows the company to police itself on worker safety by appointing its own team of experts to evaluate plant safety and preparedness, even as COVID-19 cases proliferate and risks to workers continue.”

For more, check out KELO.

Happy 100th Birthday to my Aunt Lucy Nichol, a Veteran of UE Targeted by Red Scare

Finally, I want to wish a very happy birthday to my Aunt Lucy Nichol, who turned 100 today.

During World War II, my Aunt Lucy became a UE organizer and helped lead union drives, primarily at Sylvania shops in Central Pennsylvania and elsewhere. Later, she met and married my Uncle Herb, also a UE organizer, before she left union organizing and became a math teacher.

In the 1950s, the House Un-American Activities Committee and the FBI targeted them both because of their association with UE. In my Uncle Herb’s testimony, he refused to snitch on other leftists in the UE. (It’s an inspiring testimony, and I hope everyone reads it here).

For decades, Lucy has been active in politics and has been an inspiration to many of us. She helped inspire my Dad, Gene Elk, to go into the UE, where he just retired as Director of Organization after 44 years of service. We’re so lucky to have Aunt Lucy around at 100.

Alright, folks, that’s all for today. Donate to help us cover the UPMC Strike tomorrow, or if you can, sign up as one of our 632 recurring donors today.