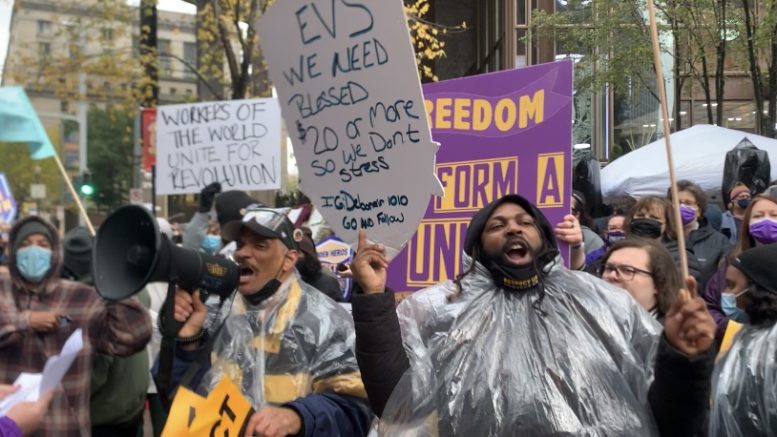 Brown, 28, had risked his life during the pandemic working at UPMC Presbyterian hospital as a food service worker for $16.58 an hour. For two years, Brown said he had braved management and participated in walkouts and rallies at UPMC but this last August he found himself at a breaking point as he collected menu requests from patients at UPMC.

“I went downstairs to go start taking menus… I just stopped,” said Brown, speaking to a crowd of 200 activists in Westinghouse. “And I just froze. And I just felt like I couldn’t move. And at that moment, I just realized I had to get out of there because I didn’t think I was gonna make it.”

Realizing he was having a panic attack, Brown walked out of work on August 3rd and went to the Resolve Crisis Center in Wilkinsburg to see a mental health crisis counselor.

“I just felt like I’m on the edge,” he recalled. “And I just don’t want to go over that edge because if you go over the edge like that, when it comes to mental health, sometimes you don’t come back.”

As he was recovering, he got invited to a Zoom call from 34-year-old Summer Lee, the first Black woman elected to the State House from Western PA, who was concerned about how he was dealing with the psychological pressures of organizing.

Throughout Pittsburgh, many Black workers and activists who spoke to Payday Report said they felt the balance of Pittsburgh changing with the ascent of Black political leaders like Ed Gainey and Summer Lee.

In November, Ed Gainey, a black working-class native of Pittsburgh, was elected to become the first Black Mayor of Pittsburgh after defeating white corporate Democrat Bill Peduto, a native of Pittsburgh’s notoriously racist South Hills suburbs. In one of his first moves, Gainey appointed Black state representative Jake Wheatly as his deputy mayor.

And now, Summer Lee, who defeated a 14-term white incumbent herself for State Representative in 2018, is widely seen as the frontrunner to replace retiring Congressman Mike Doyle.

In a city where African-Americans comprise 23% of the population, both Lee and Gainey were able to defeat white corporate incumbent Democrats by building multi-racial coalitions of Black, Jewish, Latino, young progressive activists, and even some older yinzer union diehards, who were driven to empowerment organizing style of the Black progressive challengers.

Gainey pledged to take on UPMC and has also been marching with workers at UPMC for years. During this same period, his predecessor, Mayor Bill Peduto, dropped a lawsuit challenging the non-profit tax exemption status of UPMC, the largest employer in PA with more than 52,000 employees in the state.

Now, after big political victories over the past few years, Black workers and activists feel encouraged in a way they have never seen before in Pittsburgh’s history.

Walking in the freezing rain last Thursday, UPMC worker Tasha Lewis joins 200 of her co-workers in a one-day wildcat strike outside of UPMC.

“Typically, the big corporations, people are afraid to take them on,” Lewis tells me. “But now the people at UPMC are calling out and striking. Now, we are changing.”

Lewis, 40, works in “Environmental Services” for $15.50, cleaning up blood and occasionally body parts from operating rooms following surgeries. Lewis and her fellow environmental service workers must clean an operating room in less than five minutes or face reprimands.

The cleaning is both physically and emotionally exhausting, yet she says management constantly pushes the workers to clean the operating rooms faster and faster.

“They don’t respect us, they don’t,” Lewis says. “Environmental Services is not treated as we’re important because we’re not nurses or doctors, but if we don’t clean those operating rooms, the hospitals stop work.”

Despite working full time, Lewis struggles to pay the bills and lives in the housing projects of Northview Heights, where she jokes that she’s had to come up with creative ways to get her son to protect himself from gunshots they hear outside their home.

“I gotta make it a game when we hear gunshots; hit the floor like we are playing ‘Duck-Duck-Goose,’ ” says Lewis as she demonstrates with her hands how to break her fall when diving for the floor of her apartment.

She says she would love to take her kids on vacation but doesn’t have much paid time off, and even if she did, she wouldn’t be able to afford a proper vacation anyway.

Recently, Lewis received a text from Sheetz offering her $18.75 an hour to work there, but she would not apply for the job. Previously, she was a union member as a concession worker at PNC Park, the Pittsburgh Pirates baseball stadium. She is now determined to see a union win at UPMC despite the uphill nature of the fight.

“I love my job and I love my co-workers,” she says. “These are some of the nicest people that have ever been in my life that really care about their patients. But I have seen nurses who go in the break room and they are shaking, crying, because they are so burned out.”

In her quest to unionize UPMC, she said she spoke to and received personal support from Ed Gainey and Summer Lee. Like many in the city, she said she felt that Black workers have a new sense of power after watching the coalitions that took them to power.

“So, now, we have people behind us 100% that are like ‘We are going to take them on,’ and we finally have backing now,” says Lewis. “It feels like things could be fair now cause we are gonna have a Mayor like Ed Gainey who knows what it feels like to be African-American in this city.”

As Thursday’s UPMC strike makes its way downtown, Quan Jamison, a father of four who has worked in Environmental Services at UPMC for two years, holds a sign calling for a $20-an-hour minimum wage. He leads the crowd in a chant of “Get Up, Get Down, Pittsburgh is a union town!”

For him, it’s inspiring having the Black political leadership of Gainey and Lee for the first time in his life.

However, Gainey, who grew up in the housing projects of East Liberty as the son of a 15-year-old Black mother, cautions against activists holding him out as a “role model.”

Gainey repeatedly said he may not have challenged an incumbent mayor throughout his campaign if it weren’t for so many young activists, particularly working-class Black activists, pushing him to do so.

“Most of them come from more adversity than me. So most of them, I look up to them as well because I also pull from their strength,” Gainey says.

State Rep. Lee, a working-class black native of Braddock, who went to high school with me at Woodland Hills, also cites the role of young Black workers like those at UPMC in persuading her that she can win a congressional seat as a Black socialist in Pittsburgh.

As a scrappy, working-class organizer from humble roots, she’s always the first to point out the strength of the people backing her in inspiring her to push on.

“What we know is that power of the people is always greater than the people in power,” Lee tells the rally of striking UPMC hospital workers. “So to every single one of our workers, who took the line today, thank you so much, thanks a worker.”

While a new multiracial coalition has won impressive victories in political and racial justice in Pittsburgh, workers know they still have a long way to go to unionize PNC.

But today, as workers marched in the freezing rain, it felt like it was a new day in Pittsburgh.

“Things are changing in Pittsburgh,” says Lewis. “I feel like more and more backing as people are gonna be less scared to come out on strike like today.”

Donate to Help Us Cover the Fight for UPMC Workers’ Rights

Be the first to comment on "As UPMC Strikes, Black Workers Feel New Power as Black Political Leadership Takes Over Pittsburgh"