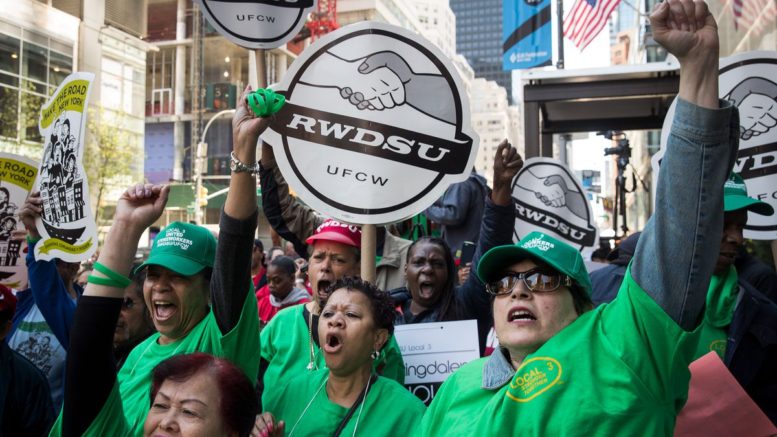 Writing for the Guardian, Payday Senior Labor Reporter Mike Elk filed a dispatch on how the retail workers’ union is fighting back against an ICE raid on a meatpacking plant in Salem, Ohio:

The RWDSU has set up a resource center in the basement of St Paul Catholic church in Salem, providing food, diapers and gift cards to families that have lost their breadwinners. The union is also giving workers access to immigration and workplace safety attorneys.

Those also looking for access to lawyers may want to check out something similar to these Denver employment lawyers, especially if there has been some sort of injury sustained due to negligence in the workplace – safety should be a primary concern for every business owner but, sadly, it’s not. Not only that, but workers who have not received proper payment for their wages, overtime, or anything else may want to take this issue up with a lawyer as a matter of urgency – people shouldn’t be able to get away with withholding money like that! Unfortunately, we still live in a world where some workers are undervalued and mistreated by those employing them and this should be called out and combatted wherever it’s seen. Legal help from an Attorney may go a long way to help people get the justice they demand and deserve. Health and safety for employees are not hard to do with affordable things like refills for first aid kits and warning signs. Employers should be making this their top priority and when this is not the case, employees have every right to stand up and fight for their legal rights. Within the meatpacking industry, there are actually a lot of risks that some people don’t see. For example, workers are exposed to chemicals, like Ammonia from refrigeration systems, that can be extremely dangerous for them. Due to things like this, workers are beginning to step up against their employers to fight for better working conditions. So many people experience health and safety concerns from chemicals like that, so it’s vital that employers consider visiting the Storemasta website to see how they should be acting following a chemical accident. This sort of thing does happen in meatpacking industries, so it’s great that workers are drawing attention to these issues.

“We are all family and we are all one, and if one of us is down, we are all gonna be there to help pick up,” said Juan Moscoso, an immigrant from Peru working as a shop steward at a nearby sister plant in Ohio. “We are a union and we are going to stand for one another.”