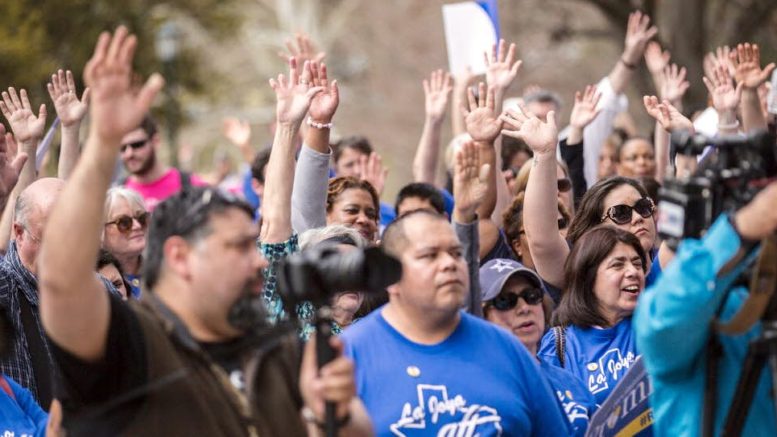 Folks, greetings from Payday Report, where we are celebrating an impressive haul of $1,884 as we seek to close our $2,500 hole.

Chip in and help make it a great payday!

In January, workers at Slate voted to unionize with the Writers Guild of America by a margin of 45-7. However, now that they are going for their first union contract, they are facing stiff opposition from the owners of Slate, the Graham Family, who previously owned the Washington Post.

The Grahams have a long track record of being hostile to unions and running sophisticated intimidation campaigns to pit workers against one another. In the late 1970s, one of those schemes paid off when NewsGuild members at the Washington Post voted narrowly to accept a contract, which would make the Washington Post, “open shop,” meaning that workers wouldn’t have to pay union dues to be covered by the union contract.

To this day, the Washington-Baltimore NewsGuild only represent 52 percent of the newsroom employees at the Post, forcing the union to engage in constant campaigning to increase their membership.

Now, the Grahams are hoping to sow similar discord at Slate. As part of contract negotiations, the Grahams have insisted on provisions that would make Slate an open shop, something which the union is adamantly opposed to.

“Our unit is deeply opposed to this measure: 94 percent of the unit has signed a letter to mgmt stating opposition to an open shop,” said the union in a statement put on twitter today.  “We are disappointed that Slate mgmt would insist on something that degrades the organizing power of workers, particularly in the current moment.”

The union at Slate is calling on readers to retweet them and tweet management to demand changes to declare their opposition to open shop rules at Slate.

This week, the Supreme Court Decision Janus made the public sector in the United States open shop. A study done by the University of Illinois-Chicago suggests that the labor movement may lose as many as 700,000 dues-paying members. Already right-wing groups have launched intensive door-to-door efforts aimed at getting union members to opt out of joining the union.

However, as teachers’ unions and other public sector unions get more militant in the age of President Donald Trump, unions say they are starting to see gains in right-to-work states. Some of these gains are coming from internal mobilization programs launched in anticipation of Janus, which are refocusing unions on doing more intensive member-to-member education.

The National Education Association says that overall they are seeing a 1.1 percent increase in their membership from last year. In the “right-to-work” state of Florida, the NEA claims to have gained over 7,000 members.

While in states that saw teacher walkouts, the NEA says they have seen a 2.2 percent increase in union membership, nearly double their national average. In West Virginia alone, the NEA reports gaining 1,250 new members.

(For more on the union’s intensive internal efforts, see Alana Samuel’s excellent piece in The Atlantic on what unions are doing to push back.)

Texas Union Membership Rose at Highest Rate in Over 3 Decades

The Texas Tribune has the story:

The union boomlet corresponds with economic growth and shifting political affiliations in Texas cities. In progressive cities such as El Paso, elected officials have helped public-sector labor organizers put down roots. And in some conservative, rural parts of the state, private-sector unions have been able to attract members with apprenticeship programs that guarantee higher wages.

Other red states are also seeing measurable union growth. Over the last year, union membership density grew in other southern right-to-work states such as Virginia, Arkansas, Georgia and Louisiana.

“You can go to almost any state and find substantial organizing activity,” said Ed Sills, communications director of the Texas AFL-CIO. “There’s more of a culture of organizing than ever before, and I’ve been in this job about 24 years.”

Another surprise: Nearly two-thirds of Texas’ union growth was in the private sector, fueled in part by the state’s robust housing sector. Construction made up about 18 percent of the total growth in membership in Texas.

Go to the Texas Tribune to read more.

In April, Oklahoma teachers won hard-fought raises. Now, those raises appear to be in question.

A well-financed dark money group called Oklahoma Taxpayers Unite, headed by former Oklahoma Senator Tom Coburn is attempting to gain 42,000 signatures to place a referendum to rollback the tax hike on the ballot.

My colleague at The Guardian, Caleb Gayle, has the story:

Recent history suggests Oklahoma Taxpayers Unite stands a good chance of overturning the hard-won tax increases. In 2016, Oklahoma tried to raise sales taxes by one cent to generate a projected increase in education funding and teacher pay. When the proposal, State Question 779, was put to the vote it failed, 58.8% to 41.1%.

For the state’s teachers, the vote sent a signal that they were not valued — not even by one cent. For Williams, “it was pretty demoralizing and disheartening”.

Oklahomans might to be asked to vote again on a tax hike if the petition successfully gets the signatures. “If we (teachers] get a raise and the revenue measures are vetoed, then some other public service will be underfunded and we will look like the bad guys,” said Williams.

For more, go to The Guardian.

Back in late May, Payday brought you the story of how Planned Parenthood of the Rocky Mountain was busting its union and backing the political opponents of those who spoke out.

Now one of those backers of the Planned Parenthood union, Emily Sirota (wife of my former colleague David Sirota) has won by a less than a thousand votes in an election to the Colorado State House.

“Last night, we won a great victory here in southeast Denver — and when I say ‘we,’ that’s exactly what I mean,” said Emily Sirota in a statement. “This has never been a campaign about me — it has been a campaign about us, and our community’s progressive values. For months, we have been campaigning for healthcare for all, universal pre-K, paid family leave, workers’ rights, stronger gun laws and more robust investment in public education.”

“While LGBTQ-inclusive corporate policies are becoming the norm, LGBTQ workers too often face a climate of bias in their workplace,” said Deena Fidas, director of HRC’s Workplace Equality Program. “LGBTQ employees are still avoiding making personal and professional connections at work because they fear coming out – and that hurts not only that employee but the company as a whole. Even the best-of-the-best private sector employers with top-rated policies and practices must do more to nurture a climate of inclusion for all.”

For more, check out The Advocate.

Last year, Payday brought you the story of how activists were attempting to save Nina Simone’s home in Tryon, N.C.

Now, the home is set to be designated as a national treasure by the National Historic Preservation Trust. In addition to the designation. The home will be the first one to be restored by the National Trust’s African American Cultural Heritage Action Fund, a new program the Ford Foundation launched last year.

“While her musical and social justice legacy burns bright, her childhood home has been neglected,” said Stephanie Meeks, president/CEO of the National Trust for Historic Preservation in a statement. “We’re delighted to work with the home’s new owners and the local community to chart a new future for the property that will honor her tremendous contributions to American society and inspire new generations of artists and activists to engage with her legacy.”

Professor Moreno also talks at length about how the rhetoric used by Bill Clinton against immigrants during the welfare debate created a framework that Trump has used to demonize immigrants.

Give a listen here.

— Over at The Guardian, my colleague Jessica Glenza has a look at the suffering afflicting child tobacco workers in the fields of North Carolina:

“There’s a lot of 14-, 15-year-olds working in the fields,” said Antonio, a 19-year-old who has done so since he was 15, a history confirmed by his mother. “They need money or they want to work,” Antonio said.

Altria, parent company of Philip Morris USA, which produces Marlboro cigarettes, said growers were “prohibited from hiring those less than 16 years of age, and may only assign hazardous duties to workers 18 and older. Both are above the legal requirements. We require parental consent for those under 18 working in tobacco farming.”

The company also said it reviewed all growers every three years. In 2017, it found only one case of child labor, in which a farmer hired two 15-year-olds.

“While the individuals were no longer employed by the grower, the contract requirements were reviewed with the grower to strengthen their understanding of the minimum age requirement,” the company said. The company also said it had hired third-party assessors to monitor labor conditions.

Go over to The Guardian to read the full story.

— Finally back home here in Pittsburgh, we continue to mourn and protest the death of Antwon Rose, alumni of my high school, Woodland Hills. HuffPost has a long look at the racial injustice and violence against students of color that have been plaguing my alma mater:

A 2017 lawsuit, currently in litigation, says that two officers from the local police department stationed in Woodland Hills High ruled the hallways with brute, violent force. Five current and former Woodland Hills students, all African-American and some with special needs, allege that officers physically or verbally abused them.

The relationship between students and law enforcement in the school is “not even strained,” said Lee, who graduated in 2005 and is now running for a seat in the state House as a progressive. “I would say it’s dangerous.”

“When you think about where Antwon went to school,” Lee said, “he saw his friends getting beat up by these cops and how the justice system works against their abusers. Would that not inform your interaction with police officers?”

For more go to HuffPost to read the full story.