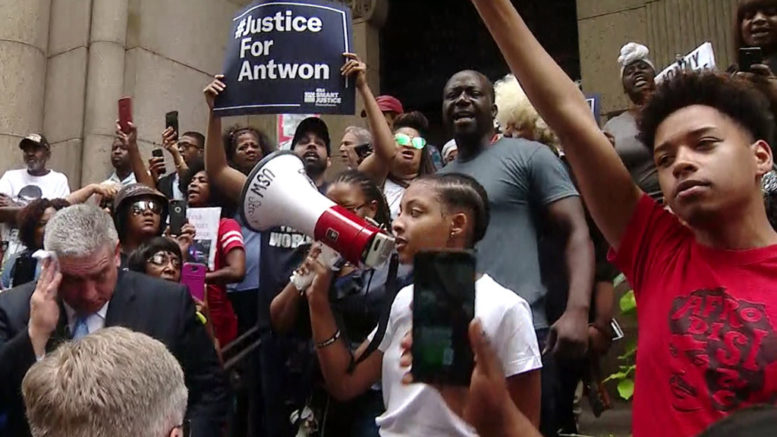 It’s Payday folks. Greetings from the Hill District, where Payday Report has finished the first stage of moving; now time for unpacking.

Payday Raises $1,180 to Get Belongings Back from Chattanooga

Earlier this week, we put out a call to raise $1,500 to get our belongings back from Chattanooga.

So far, we have raised $1,180 to get our stuff back from Chattanooga. Donate here.

A 17-year-old unarmed black teenager named Antown Rose, alumni of high school Woodland Hills was shot in the back while fleeing police in East Pittsburgh, a short distance from where I grew up in Forest Hills.

There have been frequent protests, with #BlackLivesMatter activists blocking traffic on the Parkway East last night. Elected state representative Summer Lee, a 31-year-old civil rights lawyer and union organizer was among hundreds of protesters. Even the Elk family golden retrievers joined in the protest, helping to block traffic.

For more read the Pittsburgh Post-Gazette coverage of the protest

Speaking of the Pittsburgh Post-Gazette, earlier this month, the publication forced out its cartoonist Rob Rogers for being too critical of President Donald Trump.

Now, Rogers has launched a successful patreon with over 639 monthly patrons. Sign up here to help Rogers.

Initially, many people were upset over the firing of Rogers and called for the cancellation of subscriptions to the Post-Gazette. However, NewsGuild union activists worry that a mass cancellation campaign could cost the Post-Gazette badly needed funds at a time when they are hurting.

Union Shop Raided by ICE in Ohio, Over 140 Arrested in the Raid

On Tuesday, ICE conducted its largest workplace raid yet, detaining more than 140 immigrants at a Fresh Mark’s meat packing plant in Salem, Ohio.

The raid sent shock waves through the local community and nationwide as Trump has proposed to quadruple the number of workplace raids.

“There is a lot of fear, an absolute fear, gripping the community. . . . This is not about enforcing the law. This is about decimating the Latino community,” Veronica Dahlberg, executive director of Hola, told the Washington Post.

The workers employed at the plant were members of the Retail, Wholesale and Department Store Union (RWDSU).

“Our union will not stand for violence against immigrants; we will not stand for tearing families apart and we will not stand for the terrifying tactics of the Trump Administration,”  said Stuart Appelbaum, president of the Retail, Wholesale and Department Store Union. “The RWDSU is committed to assisting workers affected by this ICE raid and will continue to fight against any and all heartless attacks on immigrant workers seeking to provide for their families.”

Many cities around the country have created programs to resist cooperating with Trump. However, even in the strongest of sanctuary cities, it can be tough to resist federal imperatives to hand over immigrants to federal deportation authorities.

The LA Times has the story:

One of the new city resolutions requires officers who question immigrants about status to also say that their questions about immigration need not be answered. The other resolution directs police to avoid arrests for misdemeanors, including those for smoking marijuana, having drug paraphernalia, and taking part in petty theft — crimes that city data shows frequently end in arrests of black and Latino residents.

While Austin is among the country’s first so-called freedom cities, it’s part of a wider movement around decriminalizing low-level offenses and decreasing arrests. According to Local Progress, a national network of progressive city officials, some council members in El Paso and Dallas are also considering “freedom city” proposals.

“Poor people of color in our city are over-punished and over-incarcerated,” said Greg Casar, an Austin City Councilman who pushed for the resolutions. “If people are being arrested less, we can also prevent people from being put in the deportation pipeline.”

“We found that black and Latino residents comprised 75% of discretionary arrests for driving with licenses invalid in the city even though they are 45% of the population of the city,” Casar said. “Black residents are seven times more likely to be arrested for low-level marijuana violations despite having comparable rates of usage of marijuana to white residents.”

For more go to the LA TImes.

Charleston Apologizes for Its Role in the Slave Trade

In a novel step towards creating a dialogue about racial reconciliation, the city of Charleston voted this week to apologize for its role in the slave trade. More than 40 percent of all slaves entered through the port of Charleston.

The measure would also create an Office of Racial Reconciliation.

“I do think that as a council, we have an opportunity to make history, not to right wrongs, but to recognize that the seat of the Confederacy was wrong,” Councilman William Dudley Gregorie said in expressing his support for the resolution. “It was wrong to enslave people. It was wrong to treat people as property and chattel and sell their children and break up families. Sound familiar? It’s happening today, folks.”

Until August of 2016, not a single newspaper in Florida had ever unionized with the NewsGuild (see Payday’s coverage here). Now in less than 2 years, three papers in Florida, all owned by Gatehouse Media have unionized, the Lakeland Ledger, the Sarasota Standard-Herald, and the Jacksonville based Florida Times-Union, the oldest newspaper in Florida.

“Our union is under no illusion that revenues associated with the news business will magically improve, and that is precisely why we have decided to unite our voices,” said the union in a statement announcing their drive.

“We fear that GateHouse’s short-term strategies will lead to more and more cuts in the future,” said the union.  “As of today, there are fewer than 40 full-time employees working across the Times-Union newsroom in a metro, opinion, life, sports, photo and the copy desk — a third of the staff we had just five years ago. Once-filled desks now sit empty.”

The Atlantic has a long look this weekend at how immigrants get caught in the gig economy:

While breaking into the U.S. economy as a foreigner can be difficult, the gig economy offers quick, accessible work that allows for flexible schedules and generally pays well above the minimum wage (though it does require valid immigration papers and a social security number). According to the companies, their workers are satisfied and optimistic: In a 2015 study published by Uber, 61 percent of surveyed drivers said their financial security was better after joining Uber, and 71 percent said their income increased.

When Abdi Hussein, a 30-year-old Somali refugee, first arrived in the U.S. six years ago, the International Rescue Committee helped him find work as a shelf stocker at Old Navy, and then as a security guard for a company called ProGuard, stationed in the lobby of a downtown Oakland office building. His main goal in the U.S., though, was education. He began taking classes at Laney College, but it became increasingly hard to align his class schedule with his work schedule. He started driving for Uber. Hussein, who has since transferred to California State University East Bay, now balances a 34-hour work week for Uber with a full load of classes. After expenses, and without any sick leave or other benefits, he estimates he’s making about $17 or $18 an hour on his best days, before taxes. Comparatively, that’s not so bad. Today’s San Francisco taxi drivers make an average of only $13.92 an hour—far lower than Hussein’s likely take-home pay, and for a job he likely wouldn’t be able to balance with his school schedule.

Go to the Atlantic to read the full story.

Longreads has an in-depth collection of reads about Juneteenth, which we suggest folks check out.

Finally, Timeline has a long look at the women who played a key role in organizing the Brotherhood of Sleeping Car Porters, America’s first major nationwide black run union founded by A. Philip Randolph:

Randolph took an immediate liking to Rosina Tucker when they met in Washington, D.C., in the early 1920s. Berthea had joined Randolph’s fledgling union, but like many members, he was flying under the radar out of fear of retaliation. Randolph soon enlisted Rosina to help with organizing activities.

Initially, she was brought in to deliver messages between union men. “I was asked to act as a liaison between Mr. Randolph and the Washington division,” she later explained. “Material was sent to me and I personally disseminated it to the men. I kept them in touch with what was going on, because it was dangerous for them to let it be known even to each other that they were members or had expressed any interest in the Brotherhood.”

The Pullman company didn’t suspect Rosina Tucker at first, even though she increasingly performed union business right under their noses. Pretending to make strictly social house calls to other Pullman wives, Rosina would bring union literature for dissemination and collect dues, all by way of her handbag.

With Randolph’s encouragement, she began to make a dedicated effort to convince the wives of Pullman porters of the importance of the union, so that they would encourage their husbands to join, or to remain despite the risks involved. She wrote later that she believed it was politically strategic and necessary “that Pullman porters’ wives be cognizant of their husbands’ working conditions. The porter’s home had to be a union home. Without a union home, the porter could not be a good union man.”

But she wasn’t able to lay low forever. Eventually news spread about a black woman labor organizer in Washington, D.C., and Pullman managers caught wind of the rumor that Rosina Tucker was their woman. The company fired Berthea on the spot. In a rage, Rosina marched down to Union Station and confronted the company’s regional director. He asked her, “Why are you taking it up?” and she answered, “I am here because you brought me into it. If you don’t take care of this matter, I will be back.” Berthea was reinstated at the company the very next day.

Go to Timeline to read the full story.