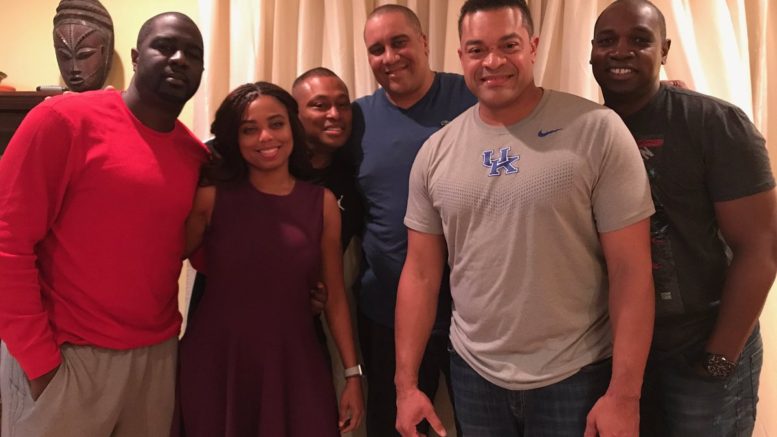 ESPN Sportscenter Co-Host Jemele Hill standing in solidarity with members of the National Association of Black Journalists shortly after the Trump White House called for her firing.

This week’s Payday goes out to non-union reporters at Politico and ESPN, who have faced management interference in their attempts to talk about race. Don’t worry folks, speak your mind on race, plenty of union workers have your back. Solidarity!

ESPN Attempted to Push Out Jemele Hill, But Her Co-Workers Stuck Up for Her

Earlier this week, White House Press Secretary Sarah Huckabee Sanders called for the firing of ESPN Sportscenter Co-Host Jemele Hill after she called Donald Trump a “white supremacist who has largely surrounded himself [with] other white supremacists.”

ESPN, which is a non-union shop, chided Hill, saying in a statement that her actions were “inappropriate.”

Now, the Writer’s Guild-represented Think Progress is reporting that ESPN attempted to sideline Hill for her statements:

ESPN initially tried to keep Hill off the air on Wednesday evening, but Smith refused to do the show without her, the sources said. Both sources also said that producers reached out to two other black ESPN hosts, Michael Eaves and Elle Duncan, to ask them to serve as fill-ins for the show—but Eaves and Duncan did not agree to take the place of Hill and Smith, either.

ESPN has since denied the charges, saying that their intention was always to have Jemele on the show.

Cetewayo Parks, the African-American executive director of the Washington-Baltimore NewsGuild says he’s got Jemele Hill’s back.

“I think there is a definite need for everyone eligible in the media to be unionized,” said Parks. “Ms. Hill is paid to give her opinion on ESPN all the time. I believe her comments came from her twitter account and should be protected.”

Parks urges journalists of color to organize to protect themselves.

“Media unions can continue to push for an employer to continue to make progress fair hiring practices and promoting diversity,” says Parks. “It is important for media companies to represent the demographics of the communities they serve.

(Full Disclosure: Mike Elk is a member of the Washington-Baltimore NewsGuild).

Politico Warned Reporters about Talking Race in a “Partisan Manner”

One non-union newsroom where reporters could use a union to talk about race is Politico.

Payday has confirmed a report that appeared in the Washington Post earlier this week that reporters at Politico were warned about speaking racial issues in a “partisan manner.”

Last Friday, in a meeting concerning social media, reporters were shown a graphic that showed readers increasingly see Politico as a trustworthy source of news.

Then, Politico Managing Editor Sudeep Reddy warned that reporters were sacrificing their objectivity if they posted comments on white nationalism. He said that reporters could post on race, but warned them against offering their opinions in ways that could be interpreted as being partisan.

In 2012, Politico Fired a Black Reporter for Criticizing Romney on Race

Interviews with reporters at Politico suggest that the talk had a chilling effect on many reporters in the room.

“Sure, management says you can talk about race, but then they warn us about it getting too partisan,” said one reporter, who spoke to Payday on condition of anonymity out of fear of retaliation. “The effect is that no one is gonna talk about race because no one wants to risk losing their job. We’ve got enough to do, who wants to worry about a tweet offending management?”

In 2012, Politico fired African-American reporter Joe Williams after he said that Romney struggled to connect with Latino voters because Romney felt most comfortable with white audiences.

At the time, Williams remarked, in a segment on MSNBC about the Romneys, that they “were white folks who are very much relaxed in their own company.”

Politico responded to his comments and the public uproar they caused by first suspending, and ultimately firing, Williams.

“His comment about Governor Romney earlier today on MSNBC fell short of our standards for fairness and judgment in an especially unfortunate way,” Politico Co-Founders Jim VandeHei and Jim Harris wrote in a memo to staff at the time.

(Harris, who fired Williams, is currently editor-in-chief of Politico, while VandeHei has moved onto a new project with Axios.)

(Full Disclosure: VandeiHei and Harris fired Payday Senior Labor Reporter Mike Elk while leading a union drive in 2015 as a senior labor reporter at Politico. In 2016, the Virginia Employment Commission ruled that Elk’s firing was without cause and unlawful.)

Given Politico’s history, the comment made by Reddy had a chilling effect on the newsroom.

Adding to the sense of anxiety in the newsroom is the feeling that younger reporters don’t have black reporters in leadership to look to for guidance. Out of its 200-person-plus newsroom, Politico currently only has four African-American reporters on staff and no African Americans working as editors.

Politico is one of the few newsrooms in 2017 that still refuses to release their diversity statistics. Politico declined multiple requests from Payday to disclosure their diversity numbers.

According to the US Census Bureau, the DC Metro area is only 46 percent white. However, Politico newsroom’s was nearly twice as white as its surrounding metro region.

In 2015, Politico’s newsroom was 92 percent white, according to a survey conducted by the International Business Times in conjunction with rank-and-file Politico reporters, including then-Politico Senior Labor Reporter Mike Elk.

“A mentor concretely helps you do your job, tells you some of those unspoken rules. But also as a black person with no other black colleagues who were there before you, you feel isolated,” says veteran journalist Janine Jackson, program director at Fairness and Accuracy in Reporting (FAIR).

“Then there is also the simple fact that we are helped by models—someone who looks like you or comes from where you do and is doing the job you want to do,” says Jackson. “It just makes it seem more possible, besides less lonely.”

“Black and Brown people get hired, but they don’t stay. And I think that’s in part because they aren’t allowed to be black on the job,” says Jackson. “They might be tokenized—sent to cover the story of the new ‘ethnic’ thing—but not free to include race in the stories where they understand it belongs, like the new report on household income, or voting, or health care.”

Last week, the University of North Carolina Board of Governors voted by a margin of 21-3 to end the pro bono civil rights legal work done by the Center for Civil Rights.

“I don’t really believe that a UNC entity ought to be filing litigation against other parts of our government—our cities, towns and state,” board Chairman Lou Bissette told meeting attendees. “If they do this kind of work under a sanctioned clinic, I have absolutely no problem with it.”

However, supporters of the civil rights center say the decision is really about stopping civil rights progress.

“This is about their opposition to the substantive work of the Center for Civil Rights,” center director Theodore Shaw told WRAL. “This is not about form. This is about substance. The people who are attacking the center and just did their dirty work would not sit back quietly if the Center for Civil Rights were a clinical program. … They are after us no matter what they said in there because of the substantive work that we do.”

This week, a group of armed guards that work at a plutonium facility at South Carolina’s Savannah River Site are on strike.

The workers, members of United Professional Pro-Force of Savannah River, Local 125, and employees of the private contractor Centerra voted to strike by a margin of 87 percent last month. The decision to strike followed the rejection of a contract that would have raised their health care and weakened their union security.

“We’re not trying to become wealthy; we’re just trying to keep a good roof over our head and keep up our kids’ good medical,” striking worker Shawn Williams told Vice. “Rich guys don’t wake up at 4 AM, put on a pair of combat boots, go to work a 13-hour rotating swing shift, and use the bathroom in a porta potty all day.”

— The Austin Chronicle profiles Jolt, a nonprofit seeking to mobilize the Latino vote:

Jolt intentionally began during an off-election year with the intent to grow a base that could mobilize and sustain voters in time for the 2018 election. They’ve set up staff in key metro areas (Jolt is currently expanding into Dallas) and recently launched a digital tool kit; the rollout of high school and college chapters; and a young adult union, allowing participants to aggregate power across the state much more quickly. While finances pose a challenge for the nascent nonprofit, it’s raised $280,000 to date. (Tzintzún is an unpaid volunteer who generates income through consulting work.) Jolt claims more than 200 all-Latino members in Austin and 15,000 statewide, who range from fifth-generation Texans to the undocumented. The organization isn’t just interested in drawing people to politics, but in sharing Latino culture, music, and art – a characteristic that distinguishes it from other groups with similar goals. A Capitol youth rally planned for Sept. 1 will feature “lucha libre” wrestlers who will “fight for justice and equality” while a hairdresser buzzes symbols like a clasped fist of solidarity into folks’ hair, if willing.

–The Pacific Standard has a look at how the federal government is helping to remember the Reconstruction:

In more recent years, a somewhat unlikely agency—the National Park Service—has stepped up to consider how and whether to mark this period by way of national historic sites. In July the NPS released a report, the product of two years of commissioned academic research, detailing what events and locations should be marked for their historic significance relative to the Reconstruction era. It is a call for communities to take the next step and erect markers, with the agency’s support. The NPS’s ambition to have events of this era designated as National Historic Landmarks could have a great effect on the public’s understanding of racism’s pervasive roots in this country—a bold, and important, move for an agency that only recently began to take on the racial complexities of the Civil War.

Protests across the country calling to remove venerations of Confederate icons underscore the importance of learning proper history. “You cannot understand race in America today without understanding Reconstruction,” says Columbia University historian Eric Foner, a preeminent expert on the period. “It gets overshadowed by the Civil War, and it has been tremendously misunderstood over the years.”

–The Bitter Southerner profiles Hatch Show Print, a printing shop that has made Nashville’s iconic posters since 1897:

“Nothing is digital here. We don’t have our type scanned. We don’t have our images scanned. All of this imagery originates here and becomes part of our collection,” Aubry says, showing a wall of shelves labeled with names like “planes, trains, automobiles,” “animals,” and “hands.” A photoplate of Robert Plant circa 1970 might sit next to Smokey Robinson and the Miracles, who sit next to a Vanderbilt football player in a leather helmet.

“It’s part of the fun in being in a historic shop,” she says. “We pull designs for posters today that were made over 100 years ago.”