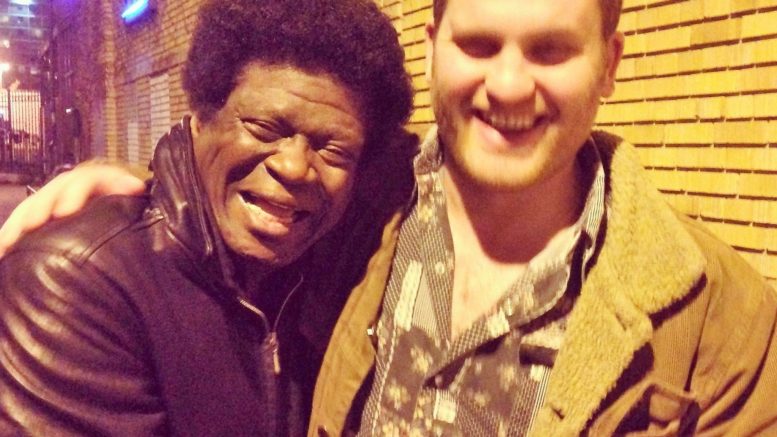 Mike Elk and Charles Bradley hanging out in Washington, D.C. in January of 2014. Bradley passed away this weekend at 68.

As a labor reporter, I have interviewed workers from all walks of life: autoworkers uranium workers, strippers, miners, teachers, mechanics, professional baseball players, roofers, grape workers in Napa, and far too many garbage truck workers.

But out of the hundreds of people I’ve met in my decade on the labor beat, only one has ever tickled me—Charles Bradley.

Then again, Charles Bradley is the only semi-homeless James Brown impersonator turned soul superstar at age 62 that I’ve interviewed. The man, dubbed “the screaming eagle of soul” and admired for an electrifying mix of world-weariness and love he delivered on top of old-school soul arrangements, was a symbol of funk and love to all who dared to cut loose.

Charles died this past Saturday at age 68 of cancer. Despite having spent most of his life as a singer in obscurity, he released his first album through Daptone Records at age 62.

“No Time for Dreaming” was a smash hit in 2011. Its sales were aided by the 2012 success of a documentary about Charles’ life, Charles Bradley: Soul of America, which became a Netflix hit.

Along with Sharon Jones, who died last year at age 60, Charles Bradley would lead a funk-soul revival that would see many aging singers revive their careers.

In January 2014, in an interview that I never released, Bradley and I sat down for a 30-minute conversation, and I was blown away by how affectionate and warm he was with me.

When I went to pose for a photo, Charles grabbed me and started tickling ferociously. And he just wouldn’t let me go. Instead, he kept tickling me as I desperately laughed. His manager warned me, “Oh, Charles will do that to you.”

His crew referred to the treatment as “getting the eagle’s talon.” Like in his music, his message of joy and love was infectious in real life.

Bradley had grown up semi-homeless in an abusive household, sleeping in the streets, and struggled to learn how to read into his late adult years.  He spent his adult years bouncing around between minimum wage jobs in kitchens, working as a handyman, and collecting cans on the street when he couldn’t afford to pay the bills.

For four years in the early 2000’s, Bradley lived in an abandoned building, depending upon electricity from nearby Latino immigrants. While living in a home with no heat, Bradley told me that he would wrap himself up in blankets and then cover himself in a plastic bag to keep the heat in when the temperature would drop below zero.

“I remember sometimes it used to be 28 degrees living in that building, and when you gotta get up to go to the bathroom in the night, you don’t want to get up because you are wrapped in a big plastic bag,” Charles told me.

I had been introduced to Charles’ music from my friend Preston Rhea from Gasdsen, Alabama. I remember how blown away I was when I first heard his record in the winter of 2013.

Bradley’s music struck me in that it was political but not in the obvious or over-the-top way that a lot of political music is. The songs didn’t come from some political program or ideology. In fact, most of Charles Bradley’s songs weren’t even written down. Because he was functionally illiterate, Bradley would often let the band play and then just go straight from the heart.

“Why can’t we show more love to make this a better day / Oh, Come back, come back to the golden rule,” Bradley sang in his hit song “Golden Rule.” “The golden rule is love, my brothers.”

His performances that earned him his fame were the stuff of old-school funk that he had perfected over decades of working as a James Brown impersonator. He sang without caution, pushing his voice to its limits night after night, sometimes growing hoarse by the end of the show.

Bradley said that his goal in life was to use his performances to get people to realize the dreams they held inside.

“Sometimes, I look at the traces in people’s faces, and they get to you,” Bradley told me. “That’s why I always tell people, I say, I don’t care how small your dreams is, how big your dreams, you gotta go after them. I tell people go out there and do something you love because if it’s positive than you feel that you got something to give.”

He said that he was so comfortable being so vulnerable as a singer because he wanted to help people get out of their shells.

“In your mind, you have things that have never been taught before because from the day you are born your mind ain’t nothing but a computer,” said Bradley. “When you are self-conscious everything stays there. Sometimes it sneaks out, and you say, ‘Wow, how did I do that?’ There are a lot of things inside of you. We gotta help get those things out.”

Charles said that even in his own performances, he found himself doing things he didn’t think he could do because the audience moved him.

“I am gonna give it my best. All I can do is give you what I have in my heart,” Bradley told me about that night’s performance. “I only can know when I let loose. The spirit has no measure. You only know what you feel when you let loose.”

As I think of Charles Bradley’s death, I think of all the times I’ve been feeling down that listening to his music cheered me up. When I started Payday, I used to play “No Time for Dreaming” on a loop all the time. The funk, soul, and love coming out of the speakers make you want to smile so much because you know at the end of the day, Charles Bradley loves you.

All of us have those little dreams that we keep bottled up in little compartments in our hearts, but we tend to push them down into our pockets like crumpled receipts we don’t want to throw away.

But to hear Bradley sing, a dream becomes something else. A dream is love to Bradley. The love that makes us believe in one another when everything pushes against us, a love that connects to someone else’s love as we seek to build something more.

Donate to Payday Report so we can keep spreading love all over the South.

Be the first to comment on "The Time Charles Bradley Tickled Me: A Labor Reporter’s Remembrance #RIP"