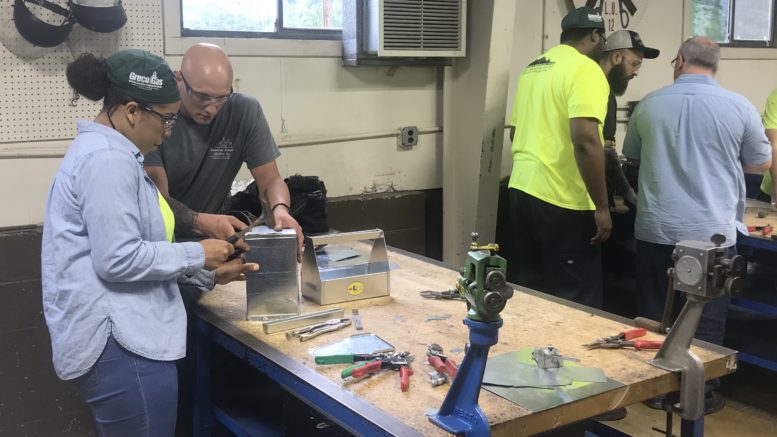 PITTSBURGH, PA – “Why do you want something in life?” asks Dietra Washington askes a class of 15 pre-union apprenticeship students “You have to find why you are doing something every day”.

The class hosted at the non-profit Energy Innovation Center is part of an effort spearheaded by local governments and construction unions to bring more African Americans into the historically white-dominated building trade unions. Inclusivity is important in all sectors, and construction is no exception, anyone from any background should have that chance to do what they want to do. As long as they are fully trained and aware of the correct protocols, such as which PPE is essential, e.g. gloves, eye protectors, masks, and so on from companies such as unigloves, then they should be able to be a part of a growing and crucial industry.

The efforts come as Pittsburgh undergoes a massive building boom as Pittsburgh is quickly becoming the next “It City”. As a result of the boom, the city is experiencing a shortage of workers.

For decades, the predominantly African American Pittsburgh Public School District has lagged far behind white school districts in the suburbs with better-funded vo-tech programs; leading to white students from the suburbs having a leg up on black students on passing the exams necessary to enter the well-paid apprenticeship programs of the region’s building trades.

“We have to do so much more education with those who graduate from Pittsburgh Public Schools because so little of the trades is being taught in high school in the city,” says Keith Schletter, apprenticeship coordinator for Smart Local 12, a sheet metal training center.

Now with the help of state and local government as well as the region’s building trade unions, the once-closed Connelly Trade School located in the historic African-American Hill District neighborhood has been converted into the LEED Platinum certified Energy Innovation Center.

“This program changes people’s lives,” says African American labor leader Ron Sapp, who came out of retirement as a union representative for Operating Engineers Local 66 to become an instructor in the course.

Sapp’s work has proven successful. Over the past four years, over 300 students have graduated from the program. Approximately, 90 percent of the candidates who appear for the apprenticeships liverpool (or any place for that matter) tend to pass through the program and are able to successfully test into union apprenticeship programs.

On average, union apprenticeships last four years during which time workers are paid as they learn career skills. The stability of a union card often equates to lifetime job security for many young people.

More than that, getting a union apprenticeship helps many avoid the discrimination that often faces formerly incarcerated workers when they try to apply for a job. Through the collective bargaining power and clout of the area’s construction union, organized labor is able to easily get many of its members with past criminal records, hired on for high-paying jobs.

“One of the good things about these [unions] is that you can have a record,” says Sapp. “You can get into the apprenticeship program with a record and actually train on these projects, it’s no big deal.”

Richard Broadus is a 46-years-old father of three who was just released from Somerset State Correctional Institute after serving five years for selling drugs.

“This program has given me another opportunity to make changes in my life and to show other people that are in similar situations that they can make changes in their lives as well,” says Broadus.

The program relies heavily on union members from similar backgrounds to help mentor apprentices and teach them how to get through the difficult program. Many graduates of the program actually wind up recruiting new members, creating a mutual support network to help them through the process.

“It’s given me a new outlook on life,” says Broadus. “Now, I don’t have to do the same thing that I had to do before to provide for my family. I just appreciate the opportunity to do better.”

At the Energy Innovation Center, 16 percent of the graduates are women, a number which is growing each year as EIC undertakes an intentional effort to recruit more women.

Jade Lee, 25, is one of the women EIC has recruited. Currently, she makes $12.00 an hour as a home health aide and is hoping an apprenticeship will give her a new position in life.

“I have a little bit of anxiety and this program has been feeding confidence into us since day one,” says Lee.

The atmosphere of the program has helped ease some of Lee’s anxiety about being one of the few women in her workplace.

“I don’t mind it being a predominantly male environment, I’ll stand out more,” boasts a smiling Lee.

Payday Report caught up with Lee when she toured the apprenticeship program at SMART Local 12 with her pre-apprenticeship class. In between making a tool pail for her future occupation, she once again had a big smile on her face.

“It’s just so exciting,” said Lee. “I just keep catching myself smiling – it’s been so cool.”

For many, the pre-apprentice program is a gateway to a new type of life.

(Full Disclosure: Ron Sapp was previously an officer in Operating a Engineers Local 66 prior retiring. The local and its members have contributed to Payday Report. Donors have no control over Payday’s editorial policies)