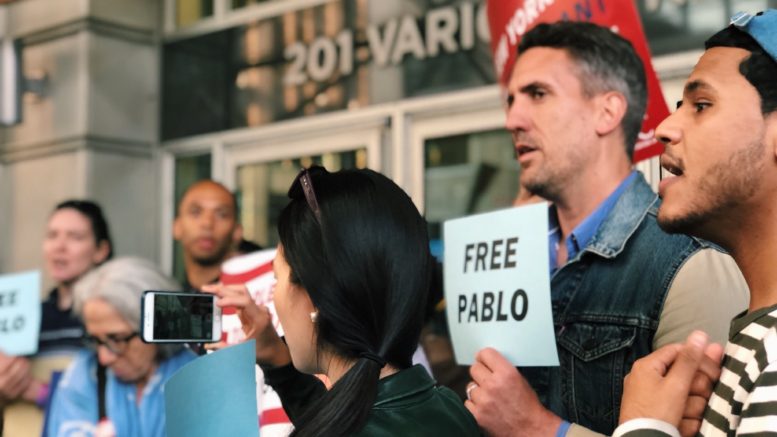 Activists protest the detention of Pablo Villavicencio, who was detained after delivering a pizza to Fort Hamilton Army Base in Brooklyn (New York Immigrant Coalition)

Greetings from the Burgh, where Payday’s senior labor reporter is planning an epic fundraiser to buy a new car. (You can donate here to the fund.)

Last Friday,  a 32-year-old worker delivering a pizza at Fort Hamilton in Brooklyn was detained by ICE. The man, Pablo Villavicencio, is an undocumented worker from Ecuador with a green card application in progress that has a strong chance of being approved as his wife is a U.S. citizen and he is the father of two citizens.

Now, his family is shattered.

“I just want an answer: why?” Villavicencio’s wife, Sandy Chicas, said at a press conference this week. “It’s cruel that they are going to separate my daughters from him.”

To show their solidarity, and protest the Army’s action, delivery drivers and local eatery owners are banding together to refuse to deliver food to the Army base.

“I won’t send my guys there anymore,” Josefina Cardoso, owner of the El Puente restaurant in Bay Ridge told the New York Post. “I would feel guilty if something happened.”

The Washington Post reported that ICE agents entered the company’s break room undercover and attempted to lure workers into receiving free Dunkin Donuts so as to not tip them off to the impending raid.

Many children were left in day care and the local community was in a panic after the raid.

The raid by ICE comes as industry groups in Ohio complain about worker shortages caused by Trump’s crackdown on immigrants. This comes even after the Trump Administration agreed to increase the number of guest worker visas issued this year from 66,000 to 81,000.

“There is not a large enough workforce to fill our seasonal positions,” the Ohio Landscape Association wrote on Facebook this week. “We need Congress to pass legislation to provide more Visas now. The additional 15,000 Visas being issued does not meet the need.”

“This vote by our UPS and UPS Freight members gives the negotiating committees bargaining leverage this week and during subsequent negotiations for the national contract and the supplements,” said Denis Taylor, director of the Teamsters Package Division and co-chairman of the Teamsters National UPS Negotiating Committee in a statement put out by the union.

The strike vote marks the first time since 1997 that the union has voted to go on strike at UPS.

The Teamsters’ labor contract is set to expire on July 31 at which point they can strike at will.

Two weeks ago, custodians employed through nonprofit Didlake, that work at the Army National Guard building, went on strike after their employer refused to recognize their union after they voted successfully to unionize with the Labourers’ International Union of North America. Didlake says that allowing the workers to unionize would threaten the program that provides jobs to the disabled.

However, workers at the base, all of whom make less than $15 an hour, feel they would be hurt worse if they don’t stand up for their rights by striking.

“They take advantage of us. They give us more and more work. We can’t even sit down when we need to sit down. We have to nonstop work,“ Samantha Ulloa, who suffers from seizures caused by epilepsy, told WUSA9.

Meanwhile, more than 11,000 CWA members across the Midwest have decided to end a two-week strike after they were able to force AT&T to come back to the bargaining table with better offers.

Black Lung Up 30% in West Virginia

A new report out from occupational health researchers Kirsten Almberg and Robert Cohen, from the University of Illinois-Chicago, confirms there has been a huge spike in rates of black lung.

“It’s not that we’re discovering a new disease. We’re seeing a resurgence of a disease that should have been eradicated,” Cohen told NPR.  “You know, it’s something we should not be seeing … at all and we’re seeing thousands of cases still in the 21st century.”

Another study released two weeks ago by the National Institute for Occupational Safety and Health showed that 25 percent of coal miners, who have worked for 25 years or more in a coal mine, have black lung.

“It’s kind of a slow-rolling disaster,”  Dr. David J. Blackley one of the reports’ authors told NPR. “I think it’s a modern industrial tragedy because we have thousands and thousands of miners with debilitating lung disease that shouldn’t happen and it’s totally preventable.”

For more, go to NPR, which has been doing a superb job embarrassing the government and forcing a national conversation on the resurgence of black lung.

In May, Payday covered the growing attacks at the state level on prevailing wage rates, which set government standards on federal taxpayer-funded projects. Now, a new expose by Bloomberg Businessweek raises startling questions about whether or not the Trump Administration plans to attack prevailing wage rates.

Over the past year, the U.S. Department of Labor has formally given approval for contractors to pay $7.25 for specific government-funded projects in six Texas counties, according to letters reviewed by Bloomberg. Those counties are among dozens around the nation where the government-calculated prevailing wage listed for certain work—such as by some carpenters in North Carolina, bulldozer operators in Kansas and cement masons in Nebraska—is just the minimum wage.

That’s in part because, according to publicly available data from the Labor Department’s Wage and Hour Division, the agency is relying on wage survey data in more than 50 jurisdictions that’s from the 1980s or earlier. Experts said that’s a far cry from what Congress intended when, starting with the Depression-era Davis Bacon Act, it passed a series of laws meant to ensure that private companies contracted for government-backed projects pay their workers at least in the vicinity of what others get for the same work in the same geographic area.

For more, go to Bloomberg Businessweek.

Here at Payday Report, we strive hard to accurately quote women, who now make up the majority of the labor movement. Underquoting of women is a notorious problem across the news industry.

Now, the Columbia Journalism Review has launched a database to quote more women and people of color. Go to CJR to learn more and sign up.

— In Pittsburgh this week, we are celebrating the release of a documentary about our hometown hero Fred Rogers “Won’t You Be My Neighbor.”

Few recognize the role that Rogers played in spurring conversations about race on television. Jstor Daily has a look at his legacy of promoting dialogue on racial diversity:

Rogers’ little-discussed creation of a multiracial neighborhood, which didn’t look like the segregated cities where racial prejudice would erupt in dozens of urban uprisings in 1968.

In the fourth episode of the first season, Rogers introduced Mrs. Carol Saunders, a black teacher. Though the character was introduced without ceremony or fanfare, it was notable that she was referred to with the “Mrs.” courtesy title that many whites denied to African-American women. She was a feature of the first two seasons, sometimes towing a racially diverse group of students—at a time when U.S. schools were struggling to desegregate, resisting the process, and also trying to diversify their teaching staff. Her appearances were included as a matter of course, with no reference to residential or school desegregation.

Later in the show, Rogers also introduced another regular black character, real-life cop Officer Clemmons, with whom Rogers shared a plastic wading pool on-screen. Again no mention of conflict over making public facilities—including previously white-only swimming pools—available to people of all races. But Rogers could not have been oblivious to the vitriolic battles over public spaces and swimming pools, which unfolded even in his (theoretically unsegregated) home state of Pennsylvania.

For more go to Jstor Daily.

— Buzzfeed reporter Adolfo Flores, who accompanied a caravan of 300 immigrants trying to enter the U.S., has a long read about his experiences:

“It was too much — this was more media attention than we ever expected,” Garibo told me. “That’s when we realized that the media is like a double-edged sword.”

People all over the world knew about the caravan and the migrants propelling it forward, all with variations of the same tragic tale — forced from their homes by gangs, of loved ones threatened or raped or murdered.

Now they were also facing the wrath of Trump’s tweets, and soon they would feel the crushing weight of the US and Mexican governments, as the caravan became the center of a political game and a media storm, even as the migrants grappled with what it meant to suddenly become the face of their fleeing compatriots.

It was a lesson in the consequences, in the age of Trump, of getting the attention you thought you wanted.

For more go to Buzzfeed.

— Narratively has a great story this week entitled “The Hidden Queer History Behind a League of Their Own.”

— Finally, NPR has an interview with Olivia Hooker, the last surviving witness to the 1921 Tulsa race riot, which killed over 300:

“It was a horrifying thing for a little girl who’s only six years old,” she told Radio Diaries, “trying to remember to keep quiet, so they wouldn’t know we were there.”

To listen to the full interview go to Radio Diaries.

Be the first to comment on "260,000 Teamsters Vote to Strike – After Ohio ICE Raid, Industry Complains – Disabled Workers Strike at Army Base in Virginia"