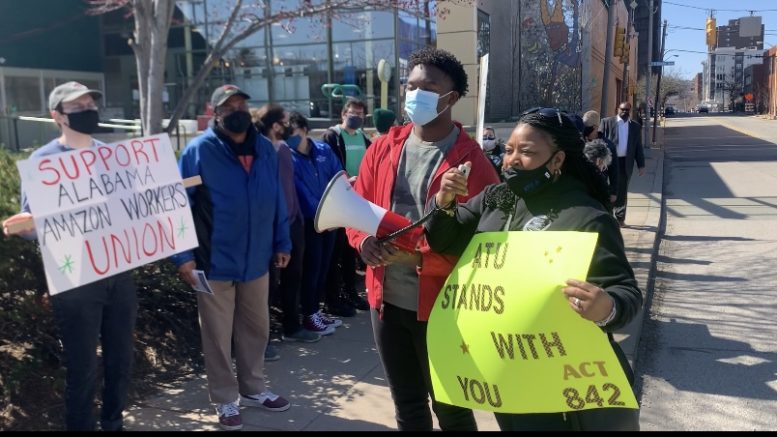 Pittsburgh activists protest in solidarity with Amazon workers outside of a Whole Foods in Pittsburgh.

PITTSBURGH, PA. — On a warm Saturday in spring, nearly three dozen protesters are shouting “Unionize Amazon!” as they picket outside of a Pittsburgh Whole Foods on Centre Ave.

Next to them is former truck driver Mel Packer, one of the founders of Teamsters for a Democratic Union. At age 76, this is Parker’s first picket line since getting the Covid vaccine and he’s excited.

“It feels like a new beginning, it’s the pandemic spring,” says Parker, a veteran organizer, as he stops to instruct younger labor activists to not bunch up so much on the picket line.

“This is a key battle for the labor movement,” he says. “Even if they lose — if they come very close — I’d consider that a victory ‘cause it’s gonna inspire people at the Amazon warehouses around the world.”

Today’s rally is one of more than 50 solidarity events that were planned across the country to show support for the high-profile union Amazon union drive in Alabama.

In Pittsburgh, activists and local politicians are walking the picket line to show their support.

As Packer instructs Pitt students at the front of the picket line on how to properly walk on a picket line, Black bus drivers from the Port Authority bring up the rear at the picket line organized in part with the support of New Afrikan Workers Union.

Nearby, Karima Howard of Rankin, Penn. is working the megaphone.

“Alabama we just want you to know that ATU stands with you, Pittsburgh is a union town,” shouts Howard, the first Black woman ever elected as an officer of ATU Local 85.

“Stand up for your people, UNIONIZE!!” she shouts.

The crowd answers back “Amazon.”

Black State Representative Ed Gainey, who is running for mayor against White incumbent Mayor Bill Peduto, looks ecstatic as he takes the mic to address the picketing crowd of 30 Amazon workers.

“The day we stop organizing is the day we lose,” Gainey tells the crowd of workers.

Gainey, like many Democrats, has followed the lead of many Democrats and President Joe Biden, and has quickly jumped on board with the Amazon union drive.

“The only way that we do this, to stop corporate welfare, is if we continue to unionize to make sure we fight against corporate greed and continue to make this city and nation one,” Gainey shouts.

Gainey’s support is key as there are several Amazon facilities in the Pittsburgh area and labor activists think a win in Alabama could open the door to union organizing in Pittsburgh.

Back at the picket line, Packer keeps his enthusiasm going.

“When that fucking warehouse opens in Lawrenceville, we should be handing out flyers, everything is possible now,” he says.

For many, the Amazon fight is the beginning of a new era.