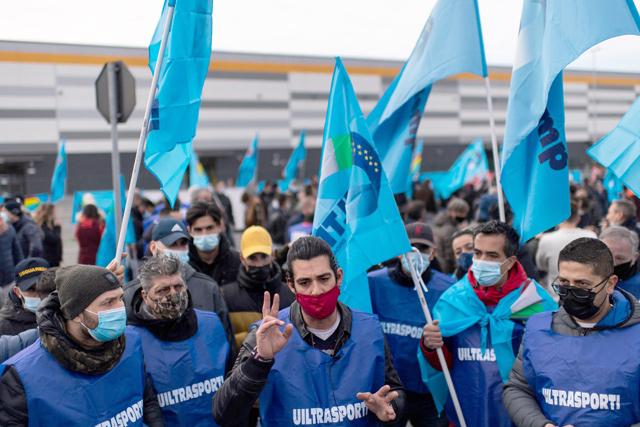 Greetings from the Burgh, where we are leaving for Alabama on Friday.

For nearly two months now, workers at Amazon’s warehouse in Bessemer, Alabama have been voting on whether to unionize.

Today, the NLRB announced that the vote tabulation will begin on March 30 with an announcement of the vote total expected shortly thereafter.

Donate to Our Rental Car Fund

Yesterday, we successfully raised all the money we needed to book a place to stay for the week. Thanks so much for all of your donations.

Donate to Help Us Cover the Historic Union Election

In Italy today, more than 9,000 Amazon workers went on strike for 24 hours. It was the first strike against Amazon in Italian history.

In Detroit, warehouse workers at 7-UP, members of Teamsters Local 337, went on strike against a two-tier wage system that stipulates workers hired after a certain date will make less than workers hired before that date.

In this instance, many older (and largely white) workers who were hired before 2005 under the first-tier system, make significantly more than younger black workers.

The contract has led to friction within the company. But rather than allow the company to continue dividing workers, the union opted to go on strike this past year after the company wouldn’t cede to eliminating the two-tier system.

“They gave us a last best and final offer, and we had the option to accept that or strike, and the contract offer was overwhelmingly turned down, and it was the second time it was turned down, so the membership decided it was best to strike,” Tony Reisdorf, a recording secretary and business agent for the Teamsters Local 337, told the Detroit Free Press.

For more, check out The Detroit Free Press.

In Westborough, Massachusetts, 80 Coca-Cola workers, members of Teamsters Local 170, went on strike. The workers are upset over the company’s decision to propose a contract that would eliminate union seniority rules.

Teamsters Local 170 Business Agent Sean Foley stated on the union’s Facebook page that “the Union has made it clear to the Company that there is no point in returning to the negotiating table until the Company withdraws any and all proposals that would circumvent an employee’s seniority in any way.”

For more, check out the Teamsters Local 170 Facebook page.

Intercept Looks at Divide Between Young & Old at Amazon

Over at The Intercept, Daniel A. Medina looks at the divide between the young and the old at Amazon in Alabama:

“Everyone’s been confused,” said Jason, who like many of the 10 Bessemer warehouse workers interviewed for this story did not provide his surname for fear of repercussions. “In my opinion, no one around my age in the building has a clear-cut answer of how they’re going to decide.”

The 20-year-old stower — responsible for lifting boxes and scanning them for processing over a grueling 10-hour shift — is part of a sizable group of younger, noncommittal BHM1 workers. Their votes or abstentions could determine the outcome of the most closely watched American union election in decades.

For more, go to The Intercept.

Finally, Alexandria Misch at New York Magazine reports on the fight to unionize Tate’s Bake Shop where undocumented workers have been facing threats of deportation in their effort to unionize:

Every 30 minutes, roughly 7,560 thin-and-crisp cookies pass through the hands of packers inside the Tate’s Bake Shop manufacturing facility, tucked away in East Moriches, on the south shore of Long Island. Catalina, a 42-year-old undocumented worker who asked me not to use her real name out of fear of retaliation from her supervisors, calls the cookie company’s product line “the belt.” She says that the oven can sometimes dispense cookies that are too hot to handle, with only plastic gloves offering any protection. When I ask her to describe her shifts, for which she is paid $15.50 per hour, she says the same word, in Spanish, three times: rapido. Any slowdown from other workers could also cause a backup, a dangerous situation, and it creates an environment where workers must look out for themselves. “I’m not going to kill myself, burn my hands while another person is doing whatever they’re doing,” she tells me, through a translator. “People who eat these cookies don’t know how difficult it is to make them.”

Thanks for keeping the donations coming to cover the union election at Amazon in Alabama.