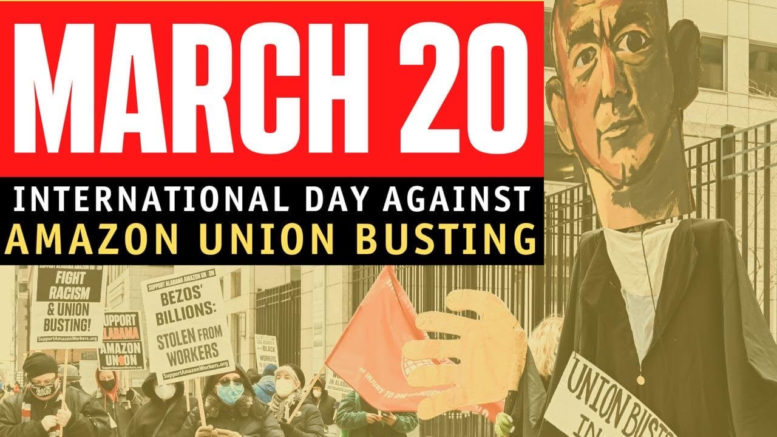 Greetings from the Burgh folks, where spring is beginning to bloom just a block away from the Tree of Life Synagogue.

We’re preparing to head down to Alabama next week and wanted to let you know that we’ve raised $450 towards our $700 goal needed to book a place in Birmingham for next week.

Donate to help us cover the fight to unionize at Amazon

Remember, the best way to support us is to sign up as one of our more than 574 recurring donors today.

Tomorrow, a massive coalition of more than 150 labor and community groups are organizing solidarity events across the country to show their support for unionizing workers in Alabama.

“Solidarity from every corner of the labor and progressive movements is needed now to show the workers in Bessemer that they are not alone, that all eyes are on the historic struggle that they are leading,” said the group in their call to action on supportamazonworkers.org

With most major cities hosting events, check out the full list of over 45 events here.

If you are in Pittsburgh tomorrow, Payday will be at the picket line at Centre Ave in East Liberty.

RWDSU Reports Over 1,000 Union Contacts at Amazon Facilities Across the Country

The union drive at Amazon in Alabama has attracted widespread attention across the country and is inspiring workers.

RWDSU reports that since they have launched the Amazon union drive that they have received more than 1,000 contacts from workers around the US seeking to unionize.

Inspired by the high-profile campaign to unionize an Amazon.com Inc. fulfillment center in Alabama, workers in Baltimore, New Orleans, Portland, Denver and Southern California have begun exploring ways to form unions at their own Amazon facilities. The Retail Wholesale and Department Store Union, which is leading the drive in Bessemer, Alabama, says it has heard from 1,000 Amazon workers around the country.

These efforts are nascent and may fade, but labor experts say they could presage a multi-front campaign to improve working conditions at the world’s largest e-commerce company even if the RWDSU loses in Bessemer, where the vote to unionize ends March 29. “There are strikes and elections that become historical pivot points,” says Kate Bronfenbrenner, the director of labor education research at Cornell University. “This is one of them.”

As the RWDSU focuses on Alabama, the Teamsters are taking the battle beyond Amazon’s warehouses and into its delivery operations, where drivers earn about half as much as some of their unionized counterparts. Even the construction unions, which help build Amazon facilities and have an uneasy truce with the company, are starting to find common cause with warehouse workers over workplace safety.

John Nichols of The Nation on Nurses Strike Brewing in Madison

Finally, John Nichols, known affectionately as “Tony Bennet of Labor Reporters”, has an article look at a hot strike brewing at a Unity-Point Health Meriter hospital in Madison:

As Americans are being vaccinated and governors speak of getting “back to normal,” unions that represent nurses and other health care workers are pointing out that their members have been through hell. They’re seeking new contracts that recognize and respect the sacrifices made during the pandemic. And, yes, they are talking about striking if it is necessary to secure those contracts.

“Nursing and public health experts warn that without adequate support, large numbers of frontline healthcare workers will likely experience symptoms of post-traumatic stress disorder (PTSD) and other psychological consequences from the stress of responding to the pandemic,” explains SEIU Healthcare Wisconsin, the union that represents more than 850 nurses at the UnityPoint Health-Meriter Hospital in Madison. With a boost from Sanders, along with other elected officials, these nurses say they are prepared to strike “to ensure nurses can take care of themselves and their patients, heal and recover after a traumatic year, and be valued and respected for their essential work.”

Alright folks, that’s all for today from the Burgh. We have some more updates coming this week. Keep sending story tips, ideas, complaints, cookie recipes, etc to [email protected]

Keep on donating so we can cover the union election at Amazon in Alabama.

Remember, the best way to support us is to sign up to become a recurring donor today.

Be the first to comment on "Amazon Union Solidarity Events in Every Major City Tom – 1,000 Union Contacts at Amazon Nationwide – Nichols on Wisc. Hospital Strike"