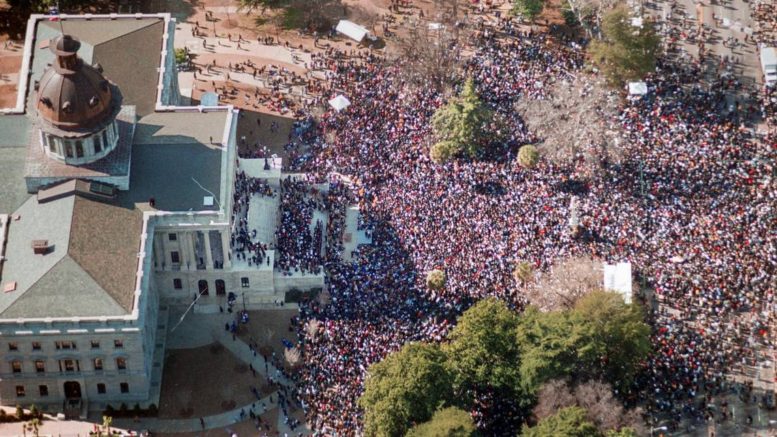 Today, teachers in South Carolina went on their first ever walkout using sick days to skip school. The teachers shut down 7 major school districts in the state; closing school for approximately 1 out of every 6 students in the state.

“The event this morning defied expectations,” says John Hale, a professor at the University of South Carolina who assisted in the walkout planning. “It’s significant because it shows how far this very conservative right-to-work state has pushed teachers to the limit and to have teachers show up in this number suggests that teachers are willing to break the culture of fear that the state has cultivated for the last 50 years”.

The walkout comes almost two years after a high profile union election was lost at Boeing’s plant in North Charleston by a margin of nearly 2-to-1; stirring hope among many in the state that the teacher movement there could spark enthusiasm for organized labor in the state.

Teachers in South Carolina, who lack collective bargaining rights, say that since then there has been a surge of union support for teachers following successful walkouts by teachers in other Southern states such as West Virginia, Oklahoma, North Carolina, Kentucky, and Virginia.

“This is the first time that I have seen that teachers felt empowered enough to step out and use their voice to make change,” says Sherry East President of the South Carolina Education Association.

East says that for far too long teachers have felt disrespected in a state that lacks collective bargaining for public employees. In addition to being the 38th lowest paid teachers in the country, teachers in South Carolina suffer indignities such as not being able to take bathroom breaks without permission from their supervisors.

“Some of our elementary teachers go from 7 in the morning till 3 p.m. without even going to the bathroom, and they are told that if they need to use the restroom that they need to text the office,” says East. “People are just fed up.”

East says that without strong unions with collective bargaining right that the power dynamics in many schools create an atmosphere where many teachers feel like servants to their administrators.

“I think the big message today was that we are professionals and that we need to be treated as such,” says East.

Conditions are so bad that over 5,300 teachers in South Carolina quit last year. As a result of the poor working conditions, more than 600 teaching positions went unfilled; leading to larger classroom sizes for the existing teachers in the systems.

However, East says that the teachers’ shortage has created a feeling of empowerment among South Carolina teachers to engage in more aggressive actions such as illegal walkouts to demand change.

“Even if you wanted to fire 10,000 people today, you can’t because you can’t replace them and that gives you a little power to take action,” says East. “It’s a teachers’ market right now, teachers are shopping, and they can look around for a district with better working conditions.”

After the success of today, East expects more action in South Carolina to resist attempts to privatize education and impose more rigorous testing on teachers in the state.

“Today was exciting, but the real work starts tomorrow all the way to the ballot box like we need to wake up,” says East. “They wanna hold us accountable, and we need to hold them accountable.”

Be the first to comment on "As South Carolina Teachers Walkout, 10,000 Storm State Capitol in Columbia"