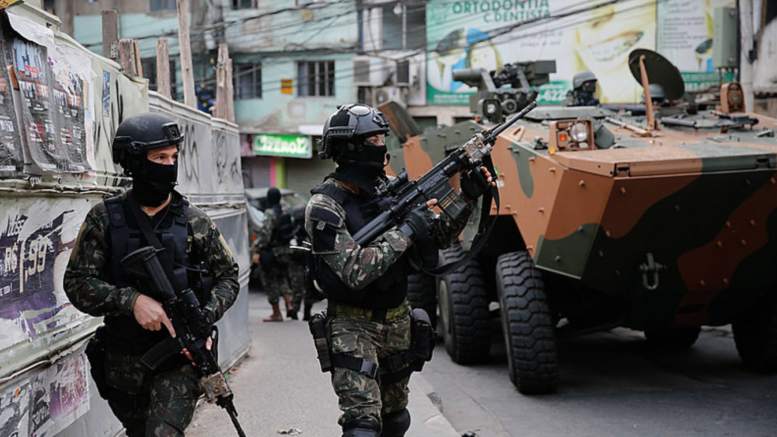 On one side of the plaza sits the Municipal Theater of Rio, a European-style opera house built in 1909 modeled after the Paris Opera House. In the courtyard between the theater and the subway, the central plaza is full of monuments and art depicting the history of Brazil. The plaza is packed with tourists and commuters on this busy Thursday afternoon.

“This may seem like a safe place,” Cesam says. “But a friend of mine was killed just three blocks from here in a robbery.”

According to the World Bank, in 2020, murders in Brazil happened at a rate of 22 murders per every 100,000 people — more than four times the rate of murders in the United States. The murder rate is largely driven by the raging drug war in the country and has created significant support for strong arm police and vigilant tactics in the country.

“This violence is used to create fear among people,” says Cesam. “It’s used to create a sense where people really are seeking order because they are so scared. And this is what is driving Bolsonaro’s push for fascism.”

Despite the deep poverty of many of Rio’s poorest slums, several are controlled by Bolsnaro-linked paramilitary groups that voted overwhelmingly for Bolsnaro in the first round of the run-off election.

Due to a lack of affordable housing, unregulated contractors began illegally building shantytowns and housing in the hillsides that string the mountains around Rio. These favelas, which can sometimes only be navigated by narrow passageways that only a motorcycle could fit through, have long been sites of vicious battles between drug gangs, the paramilitary, and police forces.

“Many people liked these militias at first because they drove out dangerous criminals,” says Cesam. “They became even more powerful and violent than the gangs they drove out.”

Now the militias control an area of Rio de Janeiro containing 1.7 million people, according to the violence-tracking group Fogo Cruzado.

Likewise, many militias are popular since their connections with the police often spare them the deadly police raids that often lead to scores of innocent bystanders, including 18 people killed last July when 400 hundred military police raided the Complexo do Alemão favela. In 2020, at least 1,239 were killed by the police in the favelas of Rio de Janeiro.

In addition to controlling territory and large protection rackets, the militias have also been linked to political violence, including the 2018 murder of socialist Rio City Councilwoman Marielle Franco, who was investigating the militia’s ties to land deals in the favelas.

“People say that fascism has arrived in Brazil with Bolsonaro, but it has always been here in Rio and been popular with some groups of people,” says Cesam.

Many of the militias have been closely linked to Bolsonaro, leading the Financial Times to describe them as a “parallel power in Bolsonaro’s Brazil.” Under Bolsonaro’s watch, the number of privately owned guns in the country has nearly doubled, giving even more power to these militias.

Nowhere was their political presence more closely felt than in the first round of Brazilian presidential voting on October 2 when militias campaigned heavily on behalf of Bosolonaro.

The trend of militia-dominated favelas voting for Bolsonaro ran contrary to polling, showing that Brazil’s poorest workers supported Lula. Lula has attacked Bolsonaro for courting the support of the militias.

“He knows it’s not me who has connections to paramilitaries and with organized crime – and he know who does,” said Lula during a debate earlier this month.

Many Lula supporters have pointed to these militias’ power and coercive effect in swinging votes to Bolsonaro’s side.

“They say your vote is secret,” said Eusébio Pinto Neto, president of the gas station workers union of Rio de Janeiro SINPOSPETRO-RJ, in an interview with Payday Report. “But if the people who own your building, who give you a job, and who control your neighborhood tell you to vote a certain way, you are going to be scared to vote any other way. There are police outside of every one of these voting stations. People have no idea what type of information is being passed onto these police.”

The threat of political violence has also dampened campaign efforts by Lula forces with these militia-controlled favelas.

Bolsonaro’s campaign has gone to great efforts to link Lula’s campaign to an increase in violence, running ads that show drug traffickers giving the “L for Lula” while holding submachine guns in the favelas of Rio. The ads highlight how major prisons in Brazil voted heavily for Lula.

The phrase “Lula e o Ladrão” (Lula is a thief) has appeared in graffiti and social media posts all over Brazil to associate Lula even more heavily with criminal elements.

“This creates real fear in people’s mind that if they vote for Lula that the cycle of violence will continue,” says Cesam. “People are scared and they don’t know what to think. So, people look to fascism to create a sense of order in their lives rather than risk experiencing more violence.”

As Cesam and I talk at a sidewalk bar in Rio’s center, a TV playing in the background shows the local TV news channel Globo cuts to a helicopter shot showing a black armored police car raiding a favela in Rio. Such breaking news alerts are common in Brazil and make for high ratings.

“People find it entertaining to watch this stuff,” says Cesam. “People cheer it on. And if you watch the news, all you hear about is violence and corruption. This creates a real sense of fear of people.”

For things to change in Brazil, Cesam says that the media must first be overhauled.

“We have to build our own media systems, our ways of communicating because the elite of this country have made so much money investing in this narrative of violence and it serves them politically,” he says.

Trade union leaders like Miguel Torres, president of the 2-million-member Força Sindical, say that the threat of the militias will not go away anytime soon. Even if Lula wins, he says the left will have to work hard to deprive the militias of the conditions to control these communities.

“The militias take power anywhere that the state is lacking,” says Torres. “We are going to need a strong program to come in and really develop these areas to beat them.”

Donate Today to Help us Cover the Brazilian Presidential Election