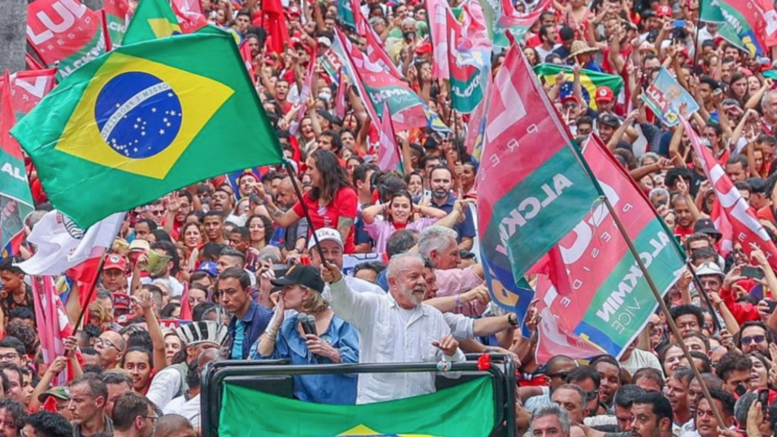 Greetings from Payday Report’s temporary HQ in Rio de Janeiro, where we are four days out from the Brazilian presidential runoff election.

A new poll by AtlasIntel shows Lula leading 52% to 46%. While there has been some doubt among political observers about the accuracy of the polls ever since Bolsonaro began encouraging supporters not to cooperate with pollsters, there is no doubt the election is very tight.

For more on the poll, check out Reuters.

Employer Intimidation Complaints Quadruple in Brazil Ahead of 2022 Election

Under Brazil’s 1988 constitution, it is illegal for employers to talk to their employees about how they will vote in federal elections.

Already in this election cycle, 903 complaints have been filed by workers against employers for intimidating workers so far, according to Folha da São Paulo. The complaints are nearly four times as many as in the 2018 election.

Several top labor leaders have also told Payday Report that numerous employers are threatening to fire employees if they don’t support Bolsonaro and rewarding employees who support him.

“Bolsonaro supporters are desperate and they are turning to intimidation,” said Miguel Torres, president of the 2-million-member Força Sindical. “We are seeing an unprecedented movement of employers breaking the law ahead of the election.”

Donate to Help Us Report the Election’s Last Four Days

We are four days out from the Brazilian presidential election on Sunday, October 30. It’ll be a sprint, and we need your help to cover it.

Brazil is the fourth largest democracy in the world, and the threat of a coup and election violence has become a real possibility for many Brazilians. Just this week, a former Congressman here in Rio engaged in a shootout with federal police, heightening fear of more election-related violence.

Donate to help us cover the presidential election here in Brazil.

Please, if you can, sign up as one of 735 recurring donors today.

No presidential campaign has ever won Brazil without winning the southeastern state of Minas Gerais. A large state with a population of 20 million, the state’s countryside has been extremely conservative for many years. Meanwhile, major cities like Belo Horizonte and Juiz de Fora have tended to vote more progressively, leading some political observers to dub it the “Pennsylvania of Brazil.”

Armed with red paint brushes and a bucket of glue, the activists marched through the streets of Parrot Hill pasting urgent warnings on to the walls of what has become the frontline in the fight for Brazil’s future.

‘Bolsonaro hates the poor,’ read one poster. ‘Bolsonaro speaks nothing but lies. He’s the father of falsehoods,’ declared another, asking residents of one of Belo Horizonte’s largest favelas: ‘Are you really going to vote for him?’

Nil César, one of the fly-posting campaigners, said the president’s contempt for the poor and dramatic loosening of gun laws meant their pre-election operation was quite literally a matter of life or death for the community’s disenfranchised youth.

‘I fear this will end in bloodshed … and the problem is that the blood will be black, favela blood,’ the 46-year-old activist said as his team plastered Parrot Hill’s redbrick homes with their notices. ‘We are trying to ensure our survival.’ “

For more, head to The Guardian.

Strikes & News Happening Back In the US

Donate to help us keep covering the Brazilian Presidential Election. Please, sign up as one of our 735 recurring donors today.

Be the first to comment on "Employer Intimidation Complaints Quadruples in Brazil Ahead of 2022 Election – Poll: Lula Leads 52% – 46%"