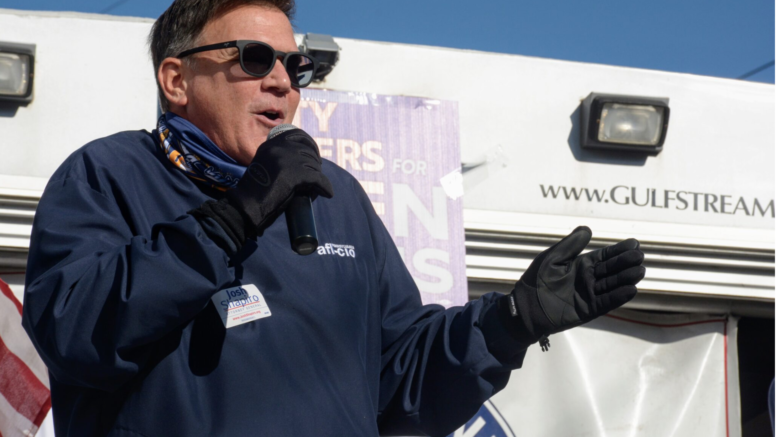 Greetings from Burgh, where we are raising money to pay bills so we can keep covering the amazing energy following the victory at Amazon.

Donate to help us cover organizing in wake of the victory. If you can, please sign up as one of our 680 recurring donors today.

Big thanks to all of those who donated to my healthcare fund.

“In an April 6 letter viewed by the Capital-Star, the national AFL-CIO, a federation that includes 57 unions and 12.5 million workers, told the state AFL-CIO that it was hiring a third party to investigate recent and unspecified ‘allegations of misconduct.’

The letter cites the national federation’s code of conduct, which states that the organization will ‘not tolerate discriminatory, harassing or otherwise unacceptable behavior in the workplace or at any of its activities, events or meetings.’

The letter also promised that anyone who talked to investigators would not face retaliation.”

For more, check out the Pennsylvania Capital-Star.

According to organizers, more than 14,000 Etsy sellers are going on strike today against Etsy’s merchant policies.

Etsy sellers are protesting the latest fee increase that will raise transaction fees by 30 %.

“If this new one goes through, our basic fees to use the platform will have more than doubled in less than four years,” organizer Kristi Cassidy wrote on the CoWorker.org petition.

The group is demanding that sellers not be forced to pay a fee for “off site ads promoting their works” that they did not authorize. Additionally, sellers are protesting AI technology glitches that can sometimes delay payments by months. They are also demanding changes to discount programs that underpay sellers. Lastly, they want to stop the reselling of goods bought on Etsy by other Etsy sellers.

“As individual crafters, makers and small business people, we may be easy for a giant corporation like Etsy to take advantage of,” reads the Coworker.org petition with more than 50,000 signatures. “But as an organized front of people, determined to use our diverse skills and boundless creativity to win ourselves a fairer deal, Etsy won’t have such an easy time shoving us around.”

For more on the demands of the Etsy sellers, check out Coworker.org.

In Washington, D.C., over 300 Howard University hospital workers went on strike today over a proposed contract that nurses say would lead to a cut in pay. Meanwhile, they say the hospital continues policies that have led to understaffing.

“It really comes down to treating us with dignity and respect,” nurse Jeanette Ethridge, RN, said in a statement. “They are understaffing in the hospital, and they are taking from us as costs continue to rise. Allowing us to maintain our financial dignity reflects respect. Providing enough staff so we can care for our patients the way they deserve to be cared for reflects respect.”

For more, check out WUSA9.

Southern Illinois School Bus Drivers Walkout
In Southern Illinois, school bus drivers in Du Quoin are walking out over the choice to use Durham Bus Services as a bus contractor, which they say is unsafe.

“We’ve had breakdowns, tows, multiple times this year,” General Manager Tracy Taylor told WSIL. “The equipment’s not safe for kids to be on, and when they have a trip out of town any farther than Carbondale or Herrin, I don’t know that I have a bus that will make it to those places.”

For more, check out WSIL.

Donate today to help me pay my health care bill this month. Please if you can, sign up as one of our 680 recurring donors today.