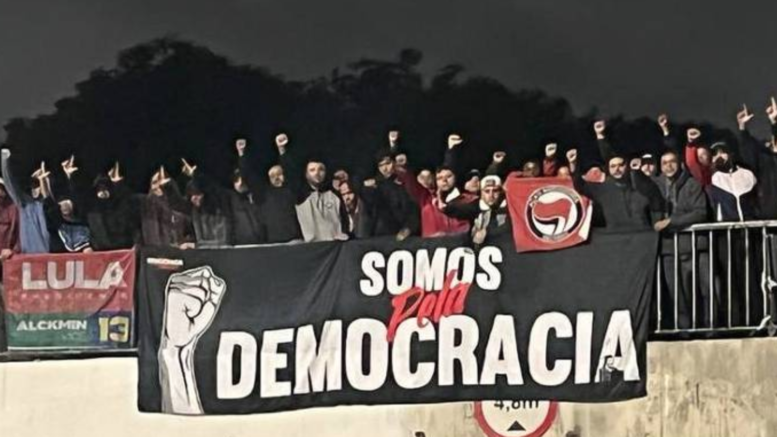 Greetings from Rio de Janeiro, where Payday plans to keep reporting over the next two weeks in Brazil before returning to Pittsburgh on November 17.

Over 150 Bolsonaro Blockades Across the Country

Across the country, Bolsonaro supporters have set up at least 150 blockades on major highways and roadways to protest Sunday’s election results that declared Lula winner of Brazil’s presidential election.

In some instances, truck drivers have said their bosses forced them to participate in setting up the blockades.

“My boss made me park here or else he’ll cut my wages,” one truck driver told Globo.

For more, check out Globo. (Turn on Google’s automatic translator in Chrome to read in English.)

Help Us Stay Another Two Weeks in Brazil

Payday plans to stay another two weeks in Rio for additional follow-up reporting.  We are looking at the left’s organizing challenges in the wake of Lula’s victory.  We will also focus on the lessons the U.S. can learn from organizing in Brazil.

Please donate to help us report for two more weeks in Brazil. Every bit helps. Or, if you can, please sign up as one of our 735 recurring donors today.

50,000 UC Workers Vote to Strike
In California, 50,000 University of California graduate employees have overwhelmingly voted over the past week to strike 33,654 to 904. They could go on strike as early as November 14.

Graduate employees are protesting being underpaid, as many essentially work full-time jobs as teaching assistants and are being paid $40,000 a year while trying to live in California cities with high costs of living.

“Our teaching assistants do the vast majority of the teaching work for UC, and we do basically all of the research. If these two things stop, the university can’t really function,” Tanzil Chowdhury, a graduate student researcher at Lawrence Berkeley National Laboratory, told the San Francisco Chronicle.

For more, check out the San Francisco Chronicle.

In Oakland, port workers shut down much of the Port of Oakland after walking off the job yesterday to protest not being paid.

“This is an issue of not being paid wages and everyone deserves the wages that they have earned and worked for,” Sean Farley, president of ILWU Local 34, told KNTV.  “It’s been a huge problem and we’ve been dealing with this nonstop.”

Farley said he’s seen more than 200 unpaid wage claims over the past 18 months.

For more, check out KNTV.

Finally, in Orange County, over 150 transportation mechanics are on strike this week over the refusal of the Orange County Transit Authority to bargain in good faith over healthcare costs.

“We have brought in mediators,” Teamsters Local 952 Secretary-Treasurer Eric Jimenez told KCBS. “We have come up with ways to save OCTA money on health care. We have reached out to OCTA board members and local political leaders. We have honored the governor’s request to return to the table and continue talks. We have asked our members to be patient and continue working with the utmost professionalism without an agreement … only to have OCTA continually refuse to bargain in good faith and disrespect us by walking out of negotiations.”

For more, check out KCBS.

Alright folks, that’s all for today. Donate to help us report for two more weeks in Brazil. Please, if you can, sign up as one of our 735 recurring donors today.

Keep sending tips, story ideas, and comments to [email protected]. Thanks again for all the support & suggestions.

Be the first to comment on "Over 150 Bolsonaro Blockades Across the Country – Strikes Shut Oakland Port – 50,000 UC Workers to Strike"