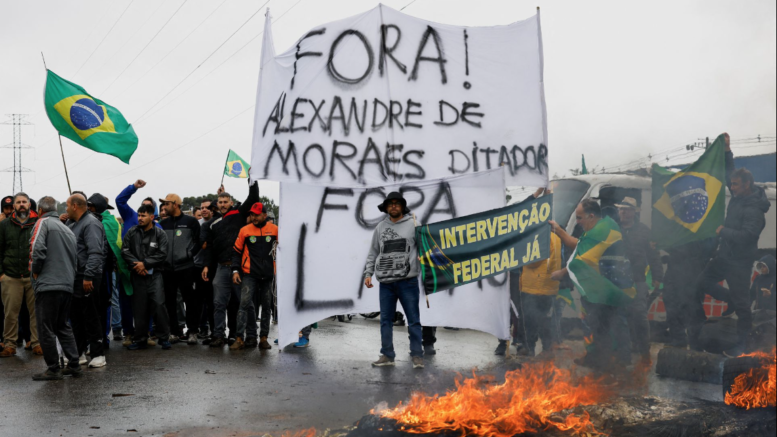 Greetings from Rio de Janeiro, where it appears that fascists are quite literally being driven away from the roadblocks they set up to pressure the military into launching a coup against Brazil’s election results.

Only 30 Bolsonaro Blockades Left in Brazil

For most of this week, Bolsonaro supporters have been attempting to shut down highways throughout the country to protest Lula’s presidential win. However, it appears they have been unsuccessful, as the Brazilian news site Portal R7 reports the number of blockades has fallen from over 150 to just 30.

The Bolsonaro blockades have been widely mocked on social media and hated by many Brazilians because of their role in aggravating Rio’s notorious traffic jams.

A video featuring a Bolsonaro supporter clinging to the front of a tractor-trailer that broke the blockade has already garnered 4 million views. (Check out the video here.)

Back up in North America, 55,000 educators are out on strike today in Ontario, Canada. The teachers are striking in response to a law passed earlier this month by Ontario’s parliament that forbids teachers from striking.

“Our members will not have their rights legislated away,” Fred Hahn, President of CUPE Ontario, told the BBC. “Now’s the time to stand up for ourselves and public education and that’s just what we’re going to do.”

For more, check out BBC.

Back in the U.S., over 200 journalists are striking at Gannett newspapers nationwide, including The Arizona Republic, The Desert Sun in California, The Journal News in New York, and The Record in New Jersey. The newspaper chain is the largest in the country employing over 12,000 journalists.

The strike comes in response to massive layoffs earlier this year. In August, the chain laid off 400 employees and has left another 400 positions unfilled, leaving many union members to believe that the newspaper chain cares little for its workers.

“They seem to think that a newspaper will run without journalists,” Susanne Cervenka, an investigative reporter at the Asbury Park Press who serves as the APP-MCJ Guild’s unit chair, told Poynter. “Well, this is what it looks like when you have a day without journalists working.”

For more, check out Angela Fu’s story at Poynter.

Alright folks, that’s all for today. Please chip in to help us report for two more weeks in Brazil. Please, if you can, sign up as one of our 735 recurring donors today.