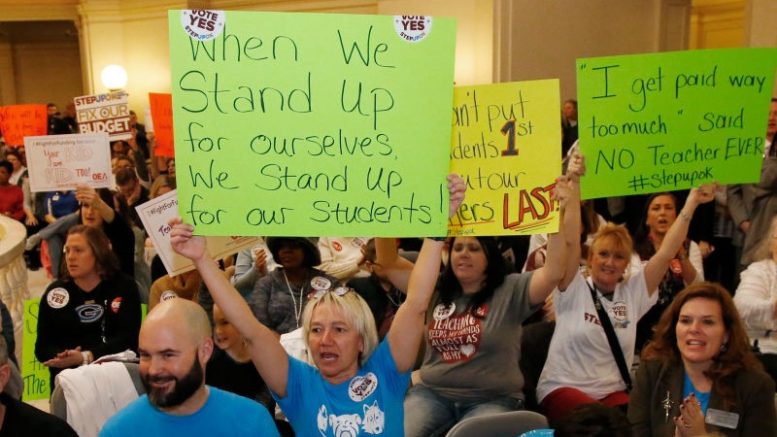 Yesterday, the Oklahoma House passed a bill that would give teachers and public employees a $6,000 dollar a year raise.

The $447 million bill marked the first time since 1990 that any chamber of the Oklahoma state legislature has voted to increase taxes. The measure is expected to pass the Senate as well.

The bill came as teachers in the state are threatening to strike next Monday, April 2nd, unless they receive a dramatic increase in pay. Teachers’ unions in more than 170 of the state’s 500 school districts have indicated they intend to strike on Monday April 2nd if their demands are not met.

Teachers in Oklahoma are the 49th lowest paid in the country. 90 school districts have switched to 4 day school weeks so that teachers could work part-time jobs to make ends meet.

Currently, Oklahoma has one of the lowest tax rates on oil and gas production in the country at a mere 2% while rival energy-producing states like North Dakota tax revenue from these industries at 12%.

However, the oil and gas industry is lobbying hard against the bill.

This afternoon, teachers’ union officials report that oil and gas lobbyists were actually out on the lawn of the Oklahoma State Capitol grilling food for state legislators in the hopes of dissuading them from voting for the tax increase.

“They are all over the building talking to legislators and senators to convince them this is a job killer,”  Ed Allen, president of the Oklahoma City American Federation of Teachers told Payday Report. “They brought food out there to try to make it as friendly [for the legislators] as possible.”

However, even if the state Senate does pass the bill, it’s not clear that the workers would refrain from striking. The idea of the strike has attracted mass popular support and at this point, concerns remain that the bill doesn’t do enough to guarantee funding and doesn’t meet teachers’ demands of a $10,000 a year salary increase.

Allen said that he is advising AFT members to return to work if the deal passes because he is worried about school district superintendents taking legal action against unions.

“If schools open and you aren’t reporting to work, it’s illegal,” said Allen.  “The thing can’t sustain itself when districts start pulling their support, which they will.”

However, the Oklahoma Education Association, which represents the majority of teachers in the state, says that it intends to strike no matter what bills pass the Senate.

“April 2 is still on. Our ask is still our ask,” said the Oklahoma Education Association in a statement.