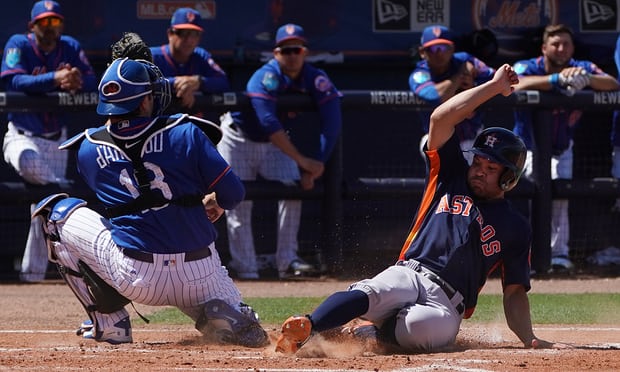 Karina Moreno and Mike Elk went down to spring training in Bradenton, Florida to file this dispatch for the Guardian:

For nearly 130 years, young men like Astudillo have been trying to break into the big leagues in baseball at spring training – their annual chance to impress the owners of Major League Baseball (MLB) clubs, and for the fans a chance to check out talent before the season’s opening on Thursday.

The 26-year-old Astudillo, a career .311 hitter, has been a star of the minor leagues, which act as training grounds for the big teams, for the last few years and is hoping for a permanent spot with the Twins this year.

But this year there’s a cloud over baseball. And as players prepare for the new season, Astudillo says that in the clubhouse, one subject is on the mind of his fellow Latino ball players – Trump’s immigration policies.

“We are conscious of everything happening, and the situation this country is currently in. It is regrettable,” said Astudillo as he took a swig of water in the Twins’ dugout. He’s particularly worried about Trump’s much-litigated travel ban that includes some people from Venezuela.

At a time when immigrants are under attack, “America’s pastime”, a third of whose players are Latino, could play a key role in helping to overcome barriers to racial equality for immigrants.

To read more, go to the Guardian.

Be the first to comment on "Baseball, Latino America’s pastime, faces new challenges in age of Trump"