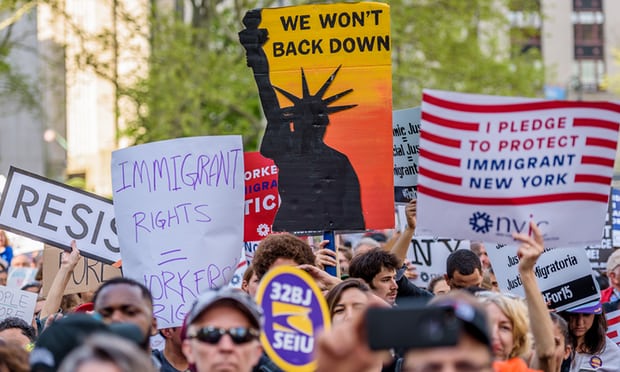 Payday Senior Labor Reporter Mike Elk filed a dispatch for the Guardian on how unions views on immigration are changing as they help their members fight deportation:

Under the banner #FreeHugo, his union went all out on his behalf, holding rallies around the country to stop his deportation.

The pressure was intense. “A couple times I tried to quit. It was just so hard to stay far from my family. It was hard when they came to visit me because of the glass when I saw them crying and I couldn’t touch them,” he said. “When they gave me letters and this support, that got me excited and I didn’t feel so alone about my case.”

Finally, on 22 November, after 204 days in detention, he was released as a result of his union’s activism in public and in court, winning a stay on political asylum grounds.

Rodrigo Núñez was less fortunate and was deported back to Mexico.

Their different fates highlight a split in the union movement and its attitude to undocumented workers who are increasingly running into difficulties under the Trump administration.

Núñez’s union, the United Brotherhood of Carpenters, did not defend him. While the Painters Union has chosen to embrace their increasingly immigrant workforce over the last few decades, the UBC has a much more strained relationship with immigrants.

For more, go to the Guardian to read the full story.