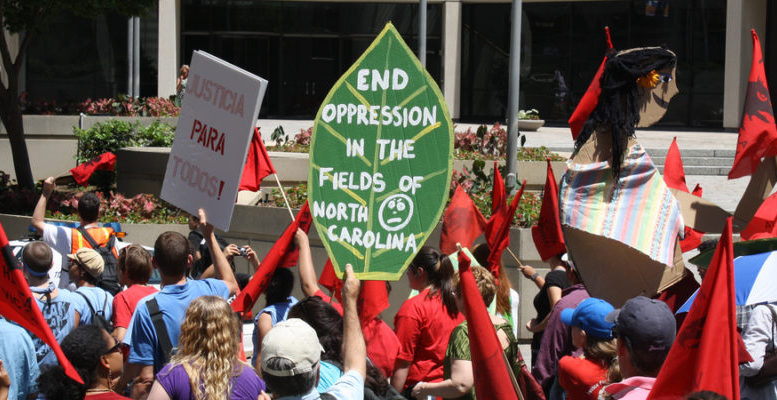 HANLEY, NORTH CAROLINA –  Today, a federal court in North Carolina ruled that a 2017 law signed by Democratic North Carolina Governor Roy Cooper that stripped the Farm Labor Organizing Committee of their right to collect dues automatically off the paychecks of farmworkers was illegal.

In fall of 2017, Cooper signed into law a farm bill passed by the Republican-controlled state legislature that strips FLOC of their ability to collect union dues directly.

The bill was sponsored by State Senator Brent Jackson, who has faced repeated lawsuits for labor rights violations filed by FLOC for abuses on his farm. In January of 2017, Jackson was forced to settle a $100,000 wage theft suit brought by FLOC on behalf of workers on his farm in Autryville, North Carolina.

The Farm Labor Organizing Committee (FLOC) charged that the bill was racially discriminatory as the bill specifically targeted Latino farmworkers, who make up 90% of North Carolina’s farmworker.

Today, a federal court in Greensboro, North Carolina agreed with the Farm Labor Organizing Committee that the law violated the 14th amendment since North Carolina allows other groups of workers to have their dues deducted from their paychecks.

“We’re happy that the federal court saw clearly that this racist law was an effort to stop farmworkers from having the resources to fund their own institution and fight for a more fair workplace,” said FLOC President Baldemar Velasquez.

“Judge Biggs’ decision to enjoin this discriminatory law means that FLOC can get back to work focusing on the needs of its members,” said Clermont Ripley, staff attorney with the NC Justice Center’s Workers’ Rights Project. “This is more critical than ever right now as farm workers throughout eastern North Carolina are struggling to recover from the devastation of Hurricane Florence.”

With over 12,000 members in North Carolina, the Farm Labor Organizing Committee has been a trailblazing union in standing up for the rights of guest workers.

Guest workers have traditionally been one of the most exploited groups as they rely on a visa from their employer in order to stay in the country.

This past May, Juan Gabriel Narciso Miguel and Jose Luis Vega Mojica were working on Randy Ballock’s tobacco farm in Roxboro, North Carolina when Ballock revoked their visas for speaking up about working conditions. They say Ballock would regularly yell racist taunts at them and threaten to deport them if they spoke up about poor working conditions.

“I don’t know how to describe [Ballock] other than saying he’s a combination of Hitler and Trump,” said Jose Mojica.

After the farm’s dorm rooms continued to flood, the farm workers decided to inform the state of the unsanitary conditions facing them in their living condition. The state sent out a social worker to visit them and that’s when workers allege that Ballock threatened to pull their visas if they complained.

“He wanted us to tell the social worker that everything was in perfect order so he could pass the inspection,” says Jose. “And because I didn’t obey, he began to target me and take work hours from me. He would tell us he could fire us and send us to Mexico whatever moment he felt like it. He would say that he had all the rights over us”.

In June, Ballock did fire Mojica and Miguel; leaving them without the proper visa to find work in the United States.

Now, Juan Gabriel Narciso Miguel and Jose Luis Vega Mojica, are fighting back using their federal rights as H-2A guest workers to sue the grower for the combined sum of nearly $20,000.

Despite not belonging to a union, the 12,000-member strong Farm Labor Organizing Committee sued on their behalf.

For decades, FLOC has organized to protect the rights of guest workers in North Carolina, won improvement for farm workers and even established a minimum wage of $11.75.

The union wage that FLOC provides, allow unionized farmworkers like the 39-year-old father of five, Rafael Ramos Gomez, known as “Capulina,” to send $400 a week to his family, about four times the money he would earn if he worked full time in Coahuila. Money that has helped Capulina’s family, but that he rarely gets to see as he is only able to live in Mexico for 3 months a year during December to March when crops aren’t in season.

“People don’t know the hunger that we go through to come to this country, you have to be able to have empathy and put yourselves in their shoes, a lot of people don’t know anything about what we go through, what real necessity looks like,” says Capulina as we sat down to talk on the rotted-out picnic benches in the cookhouse of the farm where he works on Andrew Tyson’s farm near Hanley, North Carolina last May.

It’s tough being far from home, but Capulina takes pride in the union that he and others are building in the Deep South. Today, the farmworkers union won a victory that will allow them to continue building that union of guest workers.

“The H2A visa is like a type of slave, they thought that the H2A would always result in a slave, but those ‘slaves’ coming were more educated, more aware of their rights, they knew more about the laws about human rights,” says Capulina.

Field interviews conducted in Hanley, North Carolina by Mike Elk with the translation assistance provided by Catherine Crowe. Additional translation and support provided by Dr. Karina Moreno, Ph.D. as part of a project previously commissioned at the Guardian.

Donate to Support Payday’s Coverage of the Struggle for Farmworkers Rights in North Carolina.