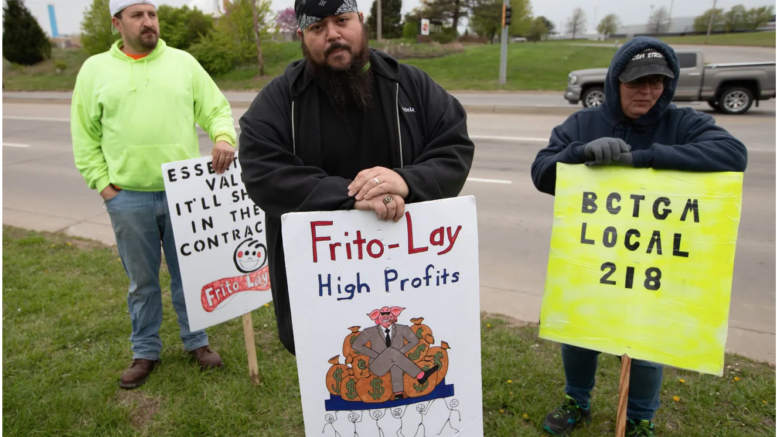 Greetings from the Burgh, where we are three days away from our end-of-the-month fundraising goal.

Only $935 to Go to Reach Monthly Payroll Goal

Folks, we don’t make a lot here at Payday Report, but every little donation matters a lot to us.

We are coming up at the end of the month with payroll, rent, and health insurance bills. And your donation matters a ton.

If you can, become a monthly sustaining donor. Thank you.

Last week, the New Orleans City Council voted to raise the wage for city contractors to $15 an hour. However, under city law, the city council lacks the authority to raise wages for city employees, some of whom make as little as $11.21 an hour. Those changes must be made by the independent City Service Commission.

To draw attention to their plight, two-thirds of the workers, some of whom are employed by the city fixing potholes and making only $11.21 an hour, decided to go on a wildcat strike.

The workers say they aren’t just protesting low wages, but also unsafe working conditions, including a lack of protection from the summer heat.

For more, check out The Lens.

In April, cannabis workers employed by Greenleaf in Rhode Island voted to unionize with UFCW Local 328 by a margin of 21 to 1. Will this decision impact the supply chain of some of the cannabis products shown on this website? Only time will tell.

However, since voting to unionize, the company has dragged its feet on bargaining a contract. Now, the company has even fired a worker who served on the negotiating committee; a move that the union saw as retaliatory. Perhaps the fired employee should now look at how to start a dispensary himself with the potential contacts he could have made during the unionization. He might also want to seek the government’s help in acquiring the licenses and paperwork necessary to sell cannabis products in the dispensary for medical use. In that regard, it is possible that the person might also wish to growing weed outdoors for commercial purposes, in which case a different license may be required. That way, he can have a better profit margin.

He can also learn from existing cannabis vendors like mmj express or similar businesses and potentially open an online retail business after some time.

To protest the firing and show the company that the new union meant business, the workers went on a one-day strike to protest it.

“The Greenleaf workers saw an injustice and responded with an incredible display of solidarity,” said the union in a statement. “Throughout the day, patients offered their support and commitment to demanding CEO Seth Bock stop the pattern of retaliation and to reinstate a valued member of their team who was unjustly terminated.”

For more, check out GoLocalProv.

In Topeka, Kansas, members of the Bakery, Confectionery, Tobacco Workers, and Grain Millers union employed at a Frito-Lay factory voted to strike by a margin of 353 to 30.

The strike slated to begin on July 5 would be the first time that workers went on strike at the factory since 1973.

“It’s the first time in many, many decades that the members of Frito-Lay, the union members, have had to do this,” Kansas AFL-CIO Executive Vice President John Nave told the Topeka Capital-Journal. “It’s been eight to 10 years since they’ve had a wage increase – so something’s wrong here. … Workers are tired of it.”

For more, check out The Topeka Capital-Journal.

Colorado is now one of only a handful of states allowing farmworkers the right to unionize as the largely Latino workforce of farmworkers is exempt from the Fair Labor Standards Act and the National Labor Relations Act.

“We stand here to change almost a hundred years of racially motivated exclusion for ag workers from basic labor protections, many of whom are still Black and brown,” Fatuma Emmad of Frontline Farming and Project Protect Food Systems, celebrating the legislation, told Colorado Springs Gazette.

Sign up today as one of our 600 recurring donors and help build our sustainable funding base.