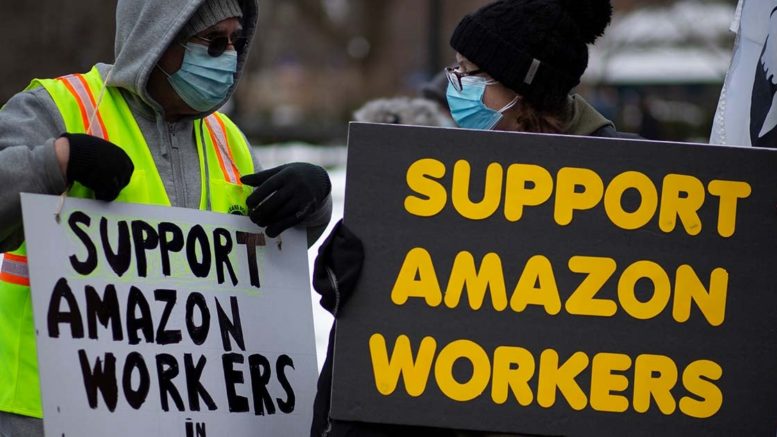 Greetings from the Burgh, where it looks like a wonderful weekend ahead.

Only $1,600 Short of Our Payroll Goal – Help Us Take the Weekend Off

Folks, it’s been exciting getting back to a social life as someone who lived isolated during the pandemic. It would be nice to take the weekend off and kick back, but we are $1,600 short of our payroll goal.

If you can, please chip in a few bucks to help us achieve our payroll goal.

These 600 donors help us to create a sustainable base of funding and we thank these donors so much.

Sign up as one of our more than 600 recurring donors today.

After the defeat of the Amazon union drive in Alabama in April, many thought it would put a damper on future union organizing efforts. However, it may have inspired a new national movement to unionize Amazon.

Yesterday, over 1,500 local union Teamsters officers voted for the 1.3 million-member Teamsters union to spend tens of millions of dollars into an unprecedented project to organize Amazon.

The Teamsters said they intend to launch a national campaign against Amazon and have pledged to help organize non-traditional strikes even in workplaces without unions to force the company to do better by its workers.

The struggle to organize workers is a crucial struggle for the Teamsters. In Southern California, drivers for UPS earn $39-an-hour as well as pensions, health care, and other benefits whereas Amazon drivers, employed as independent contractors, earn only $16-an-hour.

For more, check out The Guardian.

Today, over 2,500 workers, employed by Cook County in Chicago are protesting cuts that the county government has proposed.

The workers, who worked through the pandemic, include those employees who work for the Cook County president as well as civilian positions in the sheriff’s office, Cook County Health, and the county clerk.

“Our biggest concerns are around wages, but more than that, health care premiums, which they’re trying to double for many workers here at the county who have worked throughout the entire pandemic,” Joyce Klein, Stroger Hospital social worker, told WLS.

With many folks supporting their livelihoods by creating projects and producing viral videos, creators are beginning to demand more from the platforms where they create and publish their content. A social media follower growth service like Growthsilo.com can bring the audience in, but without support from the platform itself, creators can feel left out. They want to engage with their audience so they try and do what they can to achieve this, whether they look into Instagram automation or see how they can Buy tiktok followers to build on their platform, however, this can be for nothing if they are not given that chance to be part of the conversation.

Getting the recognition they deserve would enable them to earn just the right amount they deserve for their efforts. Whether they choose to depend solely on the money from collaborations or plan to monetize their artwork through an nft marketplace solution remains a matter of their concern, but the platform should provide a balanced platform for all.

This week, Black Tik Tock content creators went on strike to protest their content being appropriated without proper attribution or compensation. With aftershocks being felt in other Black communities on social media like Twitter. Madame Noire has the story:

Still, for all of our contributions we rarely reap the rewards or even recognition for our brilliance. This is extremely apparent on the social media app Tik Tok. Black content creators have created not only the soundtrack but even the dance moves to some of the most popular social media content that exists today. But when it’s time for brands to pay up or for talk shows to feature these creatives, the Black folk get overlooked.

We saw it earlier this year when Jimmy Fallon used a white TikToker to underperform all the dances Black kids had created. He later attempted to correct the mistake by inviting the originators of the dances to perform via Zoom. Several Black infulencers have complained about being offered pennies or nothing at all while their white counterparts – who utilize Black culture – are making thousands.

For more, check out Madame Noire.

Finally, the Louisville Courier-Journal had a moving profile of Teamsters union activist and beer delivery driver Jim Hughes’ relationship with his daughter Leah. When I first moved to Louisville, I got to know Jim and his daughter Leah and their profile is extraordinarily touching.

A nearby convenience store even announced her birth in lights next to a large beer advertisement. The now-closed Dairy Mart on New Cut Road near the Outer Loop had been one of her dad’s clients, and so they lit up the happy moment for everyone driving by to see.

The Hugheses hadn’t necessarily wanted to have children, but they were both incredible parents. Her mom and dad just figured it out, Leah told me, and they pushed her hard in school and gave her every opportunity they could.

As she got older, Jim Hughes used his superpower of seemingly knowing everyone to set her up with career opportunities while she was still a child. He was a master of networking, and so when she expressed an interest in something, he found people in those professions that she could shadow. It didn’t matter that she was only in elementary school or middle school, if she wanted to learn, he would find someone to teach her in a way that he couldn’t. Once he tracked down a lawyer for her to spend time with, and another time he introduced her to a prison psychologist.

Read the full story at the Louisville Courier-Journal.

Here are some other news stories you may have missed.

Sign up today as one of our 600 recurring donors and help build our sustainable funding base.
Keep sending tip, story ideas, links, and comments to [email protected]