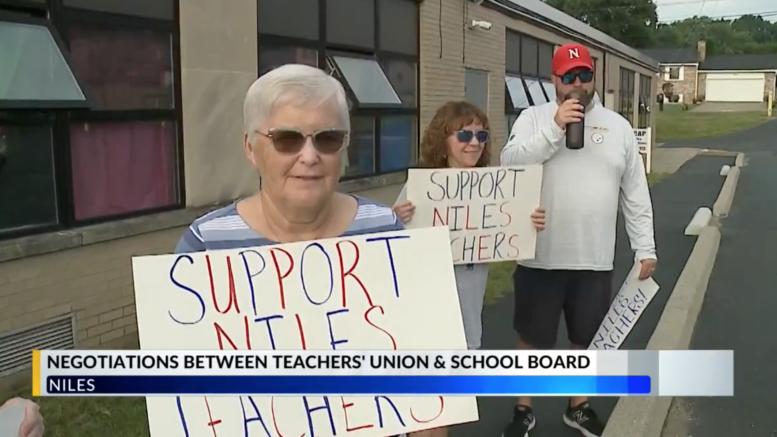 Greetings from the Burgh, where local NPR station WESA just announced their plans to unionize with SAG-AFTRA.

It’s looking very likely that teachers in Niles, Ohio will go on strike this Thursday. Already the school board has voted to hire Huffmaster Crisis Response, a firm that specializes in providing scabs to break strikes.

Now, frustrated teachers are complaining about the lack of bargaining sessions with the school district.

“We met August 1, and not again until August 26, and I feel like they’ve spent this entire month of August preparing for that strike instead of sitting down and coming to an agreement with us,” union spokesperson Traci Kempe told WKBN.

For more, check out WKBN.

Donate to Help Us Travel to Niles, Ohio on Thursday
The town of Niles, Ohio hasn’t been covered much by the national media since the nearby Lordstown GM plant closed in 2019. I plan to travel there on Thursday to cover the teachers’ strike and find out what’s happening in the community.

To support our reporting there, please donate to help us cover the cost of hotels, gas, a rental car, and food.

Please, if you can, sign up as one of our 712 recurring donors today.

In the suburban Seattle district of Kent, teachers have remained on strike at 42 schools. Yesterday, the school district failed in its attempt to get a judge to issue an injunction to stop the teachers’ strike.

Teachers, who have been on strike for nearly a week, say that they are determined to keep going.

“To our members and our educators, this is a more about much more [sic] than just money,” Kent Education Association Vice President Layla Jones told KING. “We are thinking about the classrooms that our students are in and we want those classrooms to be well resourced, and well-staffed.”

For more, check out KING.

In rural Franklin County, Tennessee, school bus drivers have gone on strike after not receiving a raise in more than 10 years.

Earlier this year, the Franklin County school director requested that the county commission approve of a $10,000 a year raise for all bus drivers, but the commission did not approve of the request.

For more on the strike, check out WSMV.

Because of a federally mandated cooling-off period, railroad unions cannot strike until Sept. 16.

But with that deadline expiring in a little more than two weeks, union negotiations have intensified between the railroads and the 12 unions that represent over 115,000 railroad workers.

This week, three unions — the International Association of Machinists, the Transportation Communications Union, and the Brotherhood of Railway Carmen union — reached a tentative agreement that would give 24% wage increases over a 5-year period. The deal, however, would increase out-of-pocket health costs for railroad workers but would cap them at 15%.

The two largest unions, SMART and the Brotherhood of Locomotive Engineers, remain at the table and say they are determined to fight for a better deal.

“Our goal is and always has been to reach a voluntary agreement that is worthy of our membership’s consideration,” the two unions said in a joint statement. “As we approach the final stages of the steps of the Railway Labor Act, we appreciate our members’ continued support. We have made it abundantly clear to the Carriers that we are prepared and willing to exercise every legal option available to us, to achieve the compensation and working conditions that we and our families rightfully expect and deserve.”

For more on railroad negotiations, check out the AP.

Yesterday, the Major League Players Association (MLBPA) began sending out union authorization cards to over 5,000 minor leaguers. The move comes as the MLBPA announced they intend to hold an election that, if successful, would make MLBPA the union representative for more than 5,000 players.

In addition, MLBPA has offered every staff member of the group Advocates for Minor Leaguers a job with the MLBPA. The group was launched two years ago with the goal of eventually unionizing minor leagu baseball, but now minor league baseball players are on the verge of winning the largest union election in teh nation this year.

Advocates for Minor Leaguers organized some of the first on-field protests against working conditions with over a 1,000 minor leaguers signing a statement supporting their organizing efforts. Their victories led to housing for all minor league players and guaranteed spring training pay for every minor leaguer.

The group thought it would take many more years to unionize the more than 5,000 minor leaguers in the baseball system. However, given the excitement around recent victories, the elimination of 20% of minor league teams, and concerns around COVID, the group found that minor leaguers were willing to move much quicker to unionize than they expected.

“This generation of minor league players has demonstrated an unprecedented ability to address workplace issues with a collective voice,” said founding Advocates for Minor Leaguers Executive Director Harry Marino in a statement. “Joining with the most powerful union in professional sports assures that this voice is heard where it matters most — at the bargaining table.”

For more on the organizing efforts, check out ESPN.

Alright folks, that’s all for today. Donate to help us travel to Niles, Ohio this week to cover this crucial teachers strike. And, if you can, sign up as one of our 712 recurring donors today.