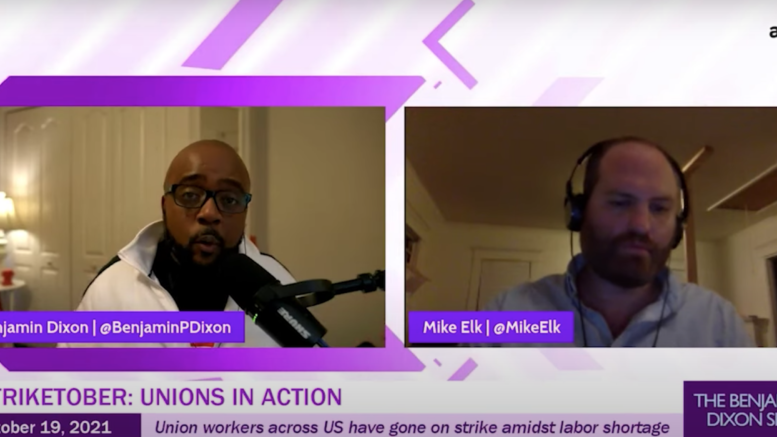 Yesterday, Ben Dixon, host of the Benjamin Dixon show, sat down with me for a 15-minute long conversation about the giant strike wave hitting America that’s been recently labeled as #Striketober by many commentators.

We discuss why it took the mainstream media, and even some of the progressive outlets, so long to recognize the strike wave when Payday Report had documented a massive strike wave more than a year ago. (Since March of 2020, Payday’s Strike Tracker has tracked more than 1,600 walkouts.)

We also discuss how the mainstream media didn’t pick up on the wave until 10,000 — largely white — John Deere workers went on strike in Iowa, Illinois, and Kansas earlier this month. Whereas, more than 900,000 retail workers, many of whom were Black, quit their jobs in August.

For almost a year, retail workers, many without the assistance of unions, have been going on mass walkouts nearly every day, but their efforts haven’t been getting as much attention in the media as the more traditional strikes organized by unions. Moreover, the collective action of Black workers is often overlooked to focus on the stereotypical image of white workers in the Rust Belt walking picket lines in more traditional ways.

Hope everyone checks out the interview here.

Donate to Help Payday Continue Our Effort to Track Strikes.

And the best way to support us is to sign up as one of our 625 recurring donors today.