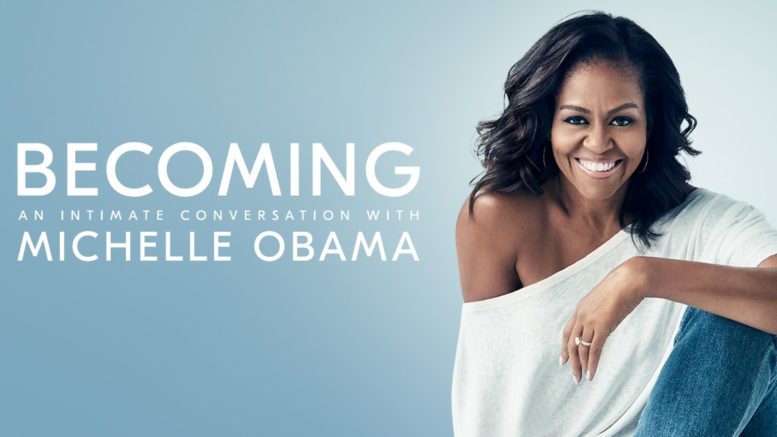 Michelle Obama faced picket lines after she refused to meet with stagehand unions about union busting at the Tacoma Dome. (LiveNation)

On Sunday, over 50 stagehands, union activists associated with IATSE, and their supporters picketed Michelle Obama’s appearance at the Tacoma Dome in Seattle where she was promoting her autobiography “Becoming.”

Seventy workers employed by Rhino Staging Northwest successfully voted to unionize with IATSE Local 15 in 2015, but so far the company has resisted signing a contract with the union for nearly four years. This despite orders from the National Relations Board ordering the company to bargain in good faith.

“We would ask you to consider using your platform to assist the men and women represented by the IATSE,” wrote IATSE Union President Matthew D. Loeb in a letter sent to Michelle Obama and her representatives on January 23. “With your support, we hope to have your Becoming, Book Tour Production sign a nation-wide agreement with the IATSE. A nation-wide agreement is what your husband signed with the IATSE in 2008 and 2012.”

For the past year, IATSE has been encouraging major acts at the Tacoma Dome to call out Rhino Staging, but their pleas have fallen on deaf ears. (See my October 2018 Guardian story “Seattle backstage workers urge Drake to speak out about their union struggle”)

In 2018, Seattle implemented a $15-an-hour minimum wage law, however, some stagehands employed at publicly-owned stadiums like the Tacoma Dome said they made as little as $12 an hour. Union organizers say that Rhino gets around Seattle’s minimum wage law by paying the workers as independent contractors for a day’s work instead of as hourly workers.

In addition to paying their workers less than $15 an hour, the workers lack health care despite working in an occupation where heavy lifting often leads to injuries.

“The Obama Administration made history and made American families more secure by extending health care to millions of people,” said Daniel Di Tolla, IATSE international vice president and the union’s Director of Stagecraft. “We have been asking Ms. Obama for two months to stand up for riggers and stagehands working on her production who lack health care benefits.”

The union says that it intends to keep protesting acts that come to the venue without speaking out on the injustices being faced by Rhino Staging’s refusal to bargain with the unionized stagehands employed at the Tacoma Dome.

Bill and Hillary Clinton are expected to speak at the WAMU Theater, another venue where Rhino is regularly used, on May 3rd. It’s unclear if the Clintons will use Rhino; union activists hope they don’t.

Donate to Payday to Help Us Continue to Hold Public Leaders Accountable.