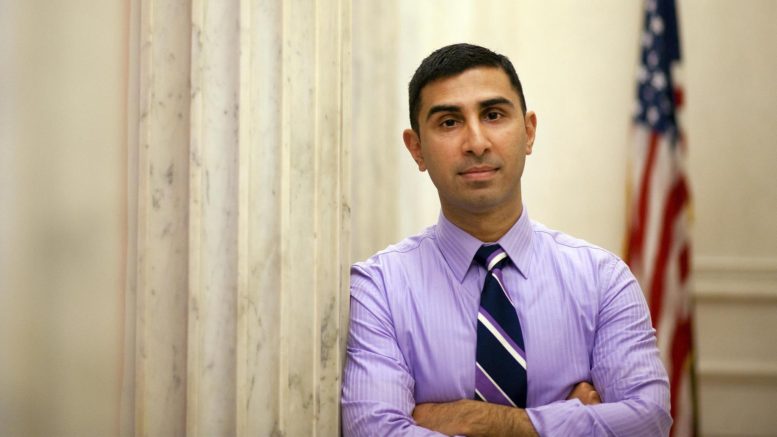 The former editor of Think Progress, Shakir previously worked as a top aide to Harry Reid before taking over as the political director of the ACLU.

The Muslim son of Pakistani immigrants, Shakir doesn’t smoke or drink. His drug of choice is baseball. A skilled baseball player, who still coaches little league today, he was recruited to play baseball at Harvard, where he was the team’s starting second baseman.

In an interview with Payday, Shakir credits baseball with helping him as a first-generation American integrate into American society.

“There is a sense [among Muslims] of being a bit ostracized within the community and targeted particularly in the first generation so you bunker down with the people with whom you feel some sense of kinship and comfort with and so sometimes the American Muslim community can get pretty insular, ” says Shakir. “Growing up with my baseball friends in Florida I was raised quietly differently. I had friends that were cross-cultural all across the board because of baseball.”

Although, unlike many star baseball players, Shakir didn’t start playing until he was 12 years old.

Like many children of Pakistani immigrants, he didn’t grow up watching baseball at home with his parents as I did.  He says he was first introduced to baseball at a friend’s house when he was eight years old.

“I had never seen this game and I started watching and I’m trying to figure out how this game is played on TV and I am mesmerized by it,” says Shakir. “So I go back home and I watched Cubs games [on WGN] for a year.”

“Literally I would say Steve Stone and Harry Caray taught me the game of baseball because I would come home from school and listen to Harry Caray and Steve Stone talk about baseball,” says Shakir.

“And let’s be clear, you and I both remember Harry Caray and he was not the one teaching me the game of baseball. He was teaching me the fun of the game, it was honestly more Steve Stone,” says Shakir laughing, recalling the jovial, goofy, absent-minded longtime Chicago Cubs broadcaster who died in 1998.

Often the game of baseball is taught father-to-son, the way I was taught by my father, but Shakir, whose parents were Pakistani immigrants didn’t know anything about baseball. He says he learned the game from the parents of kids he grew up around living in a low-income housing complex in Jacksonville, Florida.

Eventually, he became talented at playing sandlot games. When he was 12 years old, a neighbor’s father asked permission from Shakir’s parents to sign him up for baseball. Eventually, Shakir got good enough that he was recruited to be the starting second baseman at Harvard.

It also helped Shakir break out of what he saw as the insular Muslim community in Jacksonville.

“As I got older, I realized that compared to some of my brown friends growing up, why do I have so many of these other non-brown friends and it was baseball,” says Shakir. “I had Latino friends, Caucasian friends, African-American friends. I had birthday parties and it was like this is a rainbow coalition that you got here.”

Now, as the skipper of the Sanders campaign, Shakir says that many of the lessons on the baseball field about how to keep a clubhouse loose have been invaluable.

“The lessons from baseball have been instrumental in how I think about how I manage,” says Shakir. “We gotta have everyone understand their roles and how they are adding to the overall success of the endeavor.”

“It’s that third pitcher out of the bullpen that will win you the game, it will be that back up shortstop that can steal a base in the late innings that can win you a ballgame and it’s that kind of appreciation not just for your ace pitcher or your three-hole pitcher, appreciating and understanding that everybody in the organization has a role to play and you gotta find the talents and the ability to contribute to the overall success and as the manager of it, you gotta enter with that mindset,” says Shakir.

As we talk, Shakir starts to fondly recall his friendship with the backup catcher on his high school baseball team, Trey Huy.

“He was funny, he was thoughtful, he was engaging and because everyone saw that this was someone who wasn’t getting onto the field and the manner in which he conducted himself in the dugout in supporting everybody else and never carrying this kind of grudge and gripe, he lifted everybody else up in the manner in which he conducted,” says Shakir. “Those kind of lessons are what I keep in my mind as you are managing 100 plus people [on Bernie Sanders’ campaign], everyone needs to be seen for the value they bring for the human element .“

Reached by email, Shakir’s backup catcher once again provided a vote of confidence.

“Faiz was a leader on and off the field–always authentic and genuine. I have no doubt he will excel in this new role,” says Huy, who still keeps in touch with Shakir regularly.

Shakir says that ultimately baseball benefited him as a first-generation child of immigrants in so many ways.

“Baseball was everything for my life, in terms of opening up my life to education opportunities. All of my friends and networks even to this day are a lot of friends that I acquired from baseball,” says Shakir. “My parents got into baseball and we as a family really benefited from America’s pastime.”

“The immigrant experience is that my family that didn’t know anything about baseball are now huge baseball fans, they watch the Red Sox, watch the Rays, they are watching games and they are telling about games that I obviously don’t have time to watch,” chuckles Sanders’ campaign manager as he recounts how his new role prevents him from the game he so dearly loves.

For more on baseball and the immigrant experience, see my 2018 Guardian piece with Dra. Karina Moreno Ph.D. on “Baseball, Latino America’s pastime, faces new challenges in the age of Trump”.