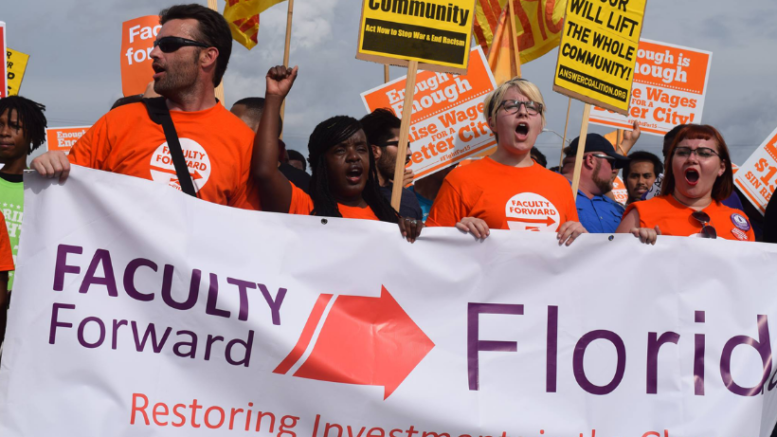 Today, the SEIU Faculty Forward campaign successfully won a landmark unionization campaign at Miami-Dade College. With over 2,800 adjuncts voting to unionize, the college now has the largest adjunct union in the country.

In 2017, more than 81% of the college’s professors were adjuncts; making on average only $22,000 a year while lacking health care.

The adjuncts say that they have unionized not just to improve their working conditions, but to fight for better conditions overall as the university faces increasing budget cuts. Over the last decade, 13% of the budget for higher education in Florida was cut.

“Our fight for a union at Miami Dade College isn’t just about our wages or the lack of respect we face every day; it’s about standing up as educators at the largest college in the nation and saying enough is enough,” said Ximena Barrientos, an adjunct professor of earth sciences at Miami Dade College. “We’re tired of watching our students go to food banks because tuition keeps rising. I’m tired of worrying about bill collectors when I should be worried about lesson plans. By standing up with one voice, we can demand the investment we need for our students and colleagues throughout Florida.”

Prior to 2017, no adjuncts in the “right-to-work” state of Florida had voted to unionize.

However, in just less than two years, more than 9,000 adjuncts, which make up more than half of the adjuncts employed in the Florida College System have moved to unionize. Adjuncts at Hillsborough Community College, Broward College, University of South Florida and Seminole State College have voted to unionize so far.

Now the union is hoping to use the momentum of the win at Miami-Dade College to help organize the rest of the system. Today, SEIU Faculty Forward announced that they also intend to launch campaigns at St. Petersburg College, Lake-Sumter State College and South Florida State College.

“Today, I’m proud to be united with my colleagues in winning the biggest adjunct professor union in the country,” said Stacey Wadle, an adjunct professor of business and communications at Miami Dade College. “As politicians chip away at our young people’s futures, we’re uniting to fight back. It’s clear to anyone watching the tide of professor organizing sweeping the state that something big is happening here.”

Donate to Help Payday to Cover Union Organizing in the South