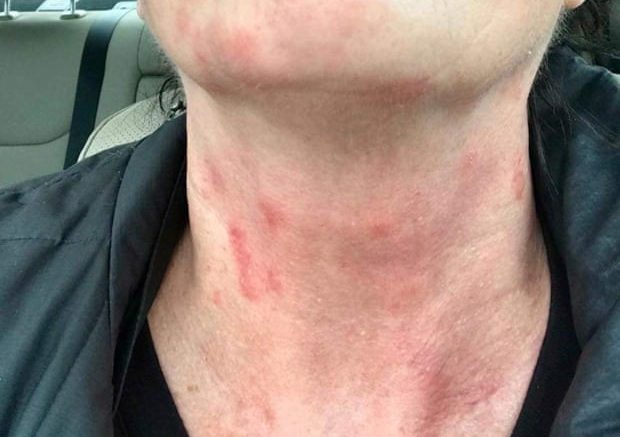 Rashes on the neck of a Delta Flight Attendant's uniform caused by exposure to formaldehyde. (Anonymous)

Over at the Guardian, Payday Senior Labor Reporter Mike Elk has an investigation into how Delta flight attendant uniforms made out of the formaldehyde are causing skin rashes for some of Delta’s flight attendants:

Shortly after their introduction, some female flight attendants said that they started getting sick, reporting skin rashes, shortness of breath, and hair loss.

“I noticed right away after I put the uniforms on that I had shortness of breath and I have been a runner my whole life,” said one Delta flight attendant who spoke to the Guardian on condition of anonymity out of fear of retaliation. “I don’t smoke or anything like that, so when I couldn’t get up the stairs without being extremely winded, I know there was some sort of problem.”

Be the first to comment on "‘Chemical burns’: Delta flight attendants say new uniforms cause rashes"