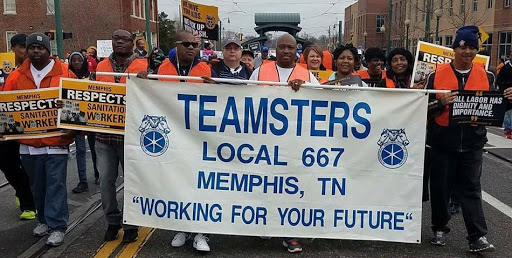 Today, a group of mostly African-American workers, members of Teamsters Local 667, went on a wildcat strike at a warehouse in Memphis, after a co-worker tested positive for COVID-19.

“We really in a hazardous situation and we scared,” Maurice Wiggins, a fork-lift driver told The Commercial Appeal’s reporter Sarah Macaraeg.

Despite being the largest grocery chain in the U.S., Kroger has yet to give its workers’ hazard pay, unlike other chains like Safeway, H-E-B, and Giant Eagle. Workers complain that the company has not taken adequate steps to protect themselves against COVID-19.

The Memphis workers join a growing wave of wildcat strikes of workers being forced to work through COVID-19 pandemic in what many see as the beginning wave of strike action that the United States has not seen since the great General Strikes of the 1930s.

“Half the workers have gone home. They scared for their safety. The ones that is here, they so tense they scared to touch the equipment,” said Wiggins, who had worked 97 hours on a mandatory seven-day-a-week shift.

After the company was slow in letting the union know about the positive COVID-19 test results, most workers chose to walk off the job.

“I done watched a supervisor have a heart attack up in there and die. And all they did was move the body over,” Barry Brown, a former Kroger warehouse worker of 15 years and business agent for Teamsters Local 667 told the Memphis Commercial Appeal.

(For more on strike check out the Memphis Commercial Appeal and be sure to follow Sara Maracaeg on Twitter for updates on the wildcat warehouse workers strike).

The strike comes as workers across the country are going on spontaneous strikes to protest unsafe conditions.

Yesterday, a group of mostly African-American sanitation workers, members of Teamsters 249, struck in Pittsburgh demanding better protective gear. Despite having many safety concerns, some workers returned to work today.

Also this week, non-union African-American poultry workers at Perdue Farms in Georgia went on a wildcat strike over unsafe conditions, and bus drivers in Birmingham went on strike over lack of protections during COVID-19.

In Queens, New York, Amazon workers walked off the job last week after a co-worker tested positive for COVID-19.

Anger has grown in the labor movement about unsafe working conditions, especially after the announcement yesterday of the deaths of 2 UAW members from COVID-19 while working at Chrysler.

Workers at Chrysler were only able to shut down their factories when workers in Sterling Heights, Michigan, went on a wildcat strike after a co-worker tested positive for COVID-19.

With workers fearing death from COVID-19, many now appear willing to risk their jobs to go on illegal wildcat strikes.

It appears to many that we are in the early stages of a series of such wildcat strikes.