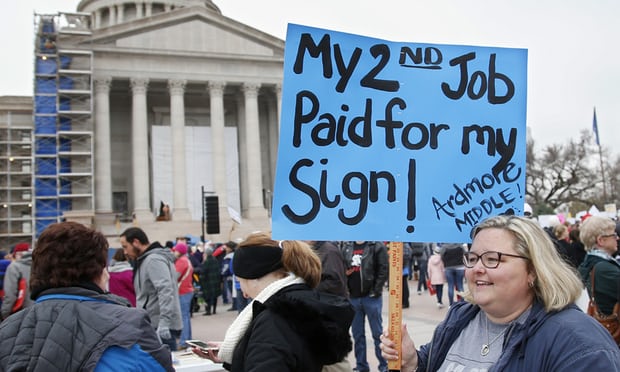 In some schools, teachers don’t assign homework because their budget for books is so small that they can’t afford to risk a student losing a $200 textbook. ( Sue Ogrocki/AP)

From Oklahoma City, Payday Senior Labor Reporter Mike Elk filed a dispatch for the Guardian on the Teacher’s Strike:

Leaning over the overpass going under the Oklahoma State Capitol Complex, a group of a dozen women in rain jackets hold signs as oil tankers pass under, honking their horns in support for the striking teachers.

“It’s like the Arab spring, but it’s a teacher spring,” geography teacher Toni Henson said, smiling as thousands of teachers march past picketing the Oklahoma state capitol and calling for higher wages and funding for schools.

The protest takes to the street Wednesday as hundreds of teachers will begin a 110-mile march from Tulsa to Oklahoma City stopping at closed down schools along the route to rest. Teachers in Kentucky have gone out on strike too and Arizona may be next.