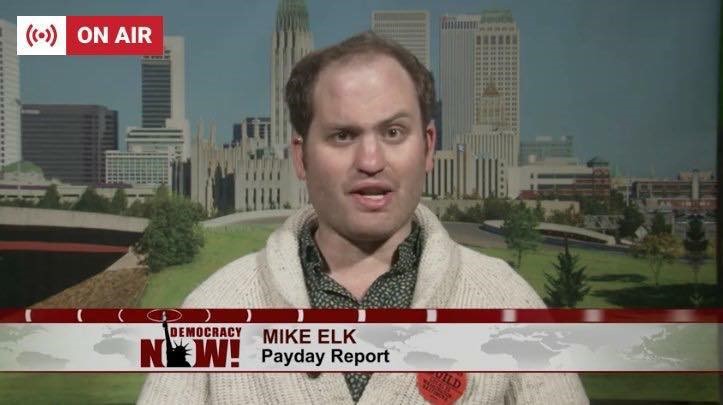 “In some of these school districts, the Democratic superintendents of the schools are actually quite supportive, because of how bad the funding cuts are,” Elk told Amy Goodman on Democracy Now this morning.

“My colleague and I, Karina Moreno, the brilliant public administration professor at Long Island-Brooklyn, crunched the numbers. And Oklahoma has cut more from its state budget since 2009 than any other state in the country,” said Elk. “It has one of the lowest tax rates on oil and natural gas. The tax rate is effective 3 percent tax rate on oil and natural gas production. In comparison, Texas, neighboring Texas, which pays its teachers a starting salary of $18,000 more, taxes oil and natural gas at an effective rate of 8 percent.”

Elk predicted to Goodman that the strike will go on for at least a week or two more.

“The superintendent in Tulsa, where I’m at, just announced that she would close schools for an entire week,” said Elk. “And she’s appearing later today, the superintendent of Tulsa, at a rally to kick off a 123-mile march from Tulsa to Oklahoma City, that’s expected to take a week. So this strike here will go on for a while, and it looks like the strike in Kentucky will go on for some time, too. And it’s going to be incredible to see what kind of ripple effect this has.”

Elk predicted that the strikes were the sign of a new era.

Watch the full interview and read the transcript here.

Be the first to comment on "Mike Elk on Democracy Now! Talks About How Democratic School Boards are Helping Oklahoma Strike"